Ask Question
Asked 6 years ago
Active 6 years ago
Viewed 637 times
0
\$\begingroup\$
Closed. This question is off-topic. It is not currently accepting answers.

I'm not sure if this is the right place but I'm a bit puzzled by this (cheap chinese) bicycle tile light. I opened it up, but I don't seem to get it working again.

It has three components:

By simply pushing the button you could change the flashing modes. From all on, over all flashing, flashing on at the time, to all off. There were 8 modes (including off).

It's somewhat frustrating that with just these three components that I can't get it to work again (I haven't tampered with them). And now I'm also curious as to how it works.

So does anybody have any ideas? 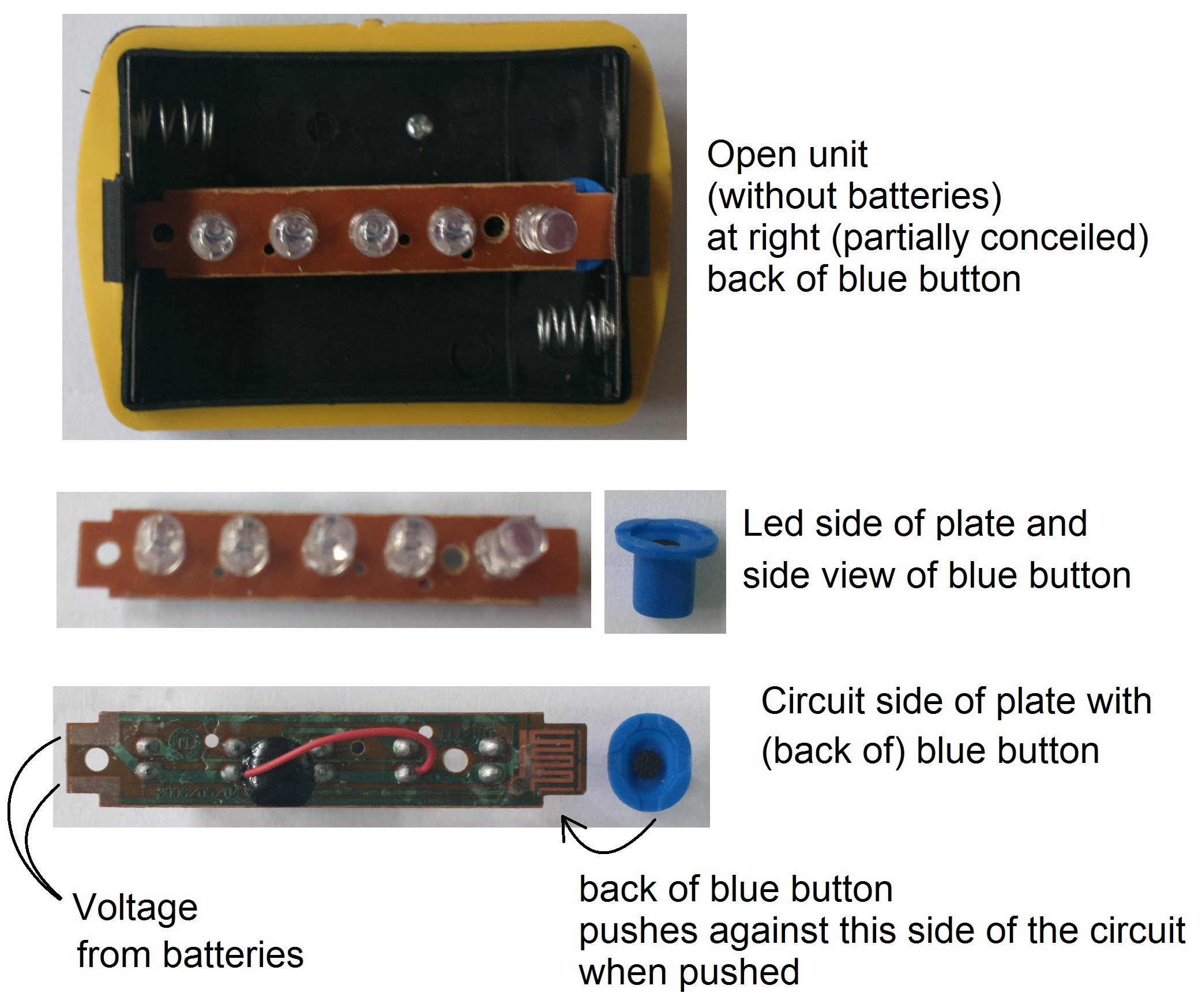 That's right, below the black epoxy, there is a IC, I suppose that is a specific driver IC for LED, because for example a IC555 would need more passive elements like R and C, that is not in this PCB

Try to bypass the battery to the led, and make a short in the wires of the buttons. If it didn't work, i suppose that the IC is dead.

The "hard black centre" of the button is carbon impregnated rubber. It creates a connection between the PCB traces that are exposed (no green solder mask) on the right of the PCB. This is a common cheap way of making buttons, and is found everywhere in small / cheap devices, such as your TV remote control.

As has already been mentioned, the fourth component you didn't mention is the black blob of epoxy with a microchip underneath it. This is the main control of the circuit - the "brains" if you will - that tells the LEDs just what to do and when to do it.

This "chip on board" is incredibly cheap to manufacture in huge quantities, and you'll usually find it in such things as calculators, watches, kids hand-held games, etc. It can be quite fragile though, and prone to breaking if the PCB is flexed, which might be what has happened in your case, especially as the PCB seems to be cheap SRBP (Synthetic Resin Bonded Paper), which is quite flexible as PCBs go.

It's also worth noting that all these components, including the LEDs, are sensitive to the polarity of the power. Connecting the batteries the wrong way will most definitely not work, and in a worst case scenario can actually kill the chip, especially in cheap devices like this where there is no money spent on "hardening" the circuit against misuse.

Others have answered the questions relating to the parts and the functioning already sufficiently.

Before discarding the light you could try several things. It looks like the whole thing is very susceptible to connection problems.

First the black part of the blue button should connect two traces of the PCB when pressed. Perhaps you have an alignment problem. It seems as well that the PCB is not clean in the corresponding region. You could try to clean it with alcohol and perhaps (gently) with scouring powder. Normaly traces used for buttons are gold plated to prevent oxidation. Chances are good that sooner or later the bare copper will oxidice and the light will stop working correctly.

One can not see in your pictures how the battery is connected to the PCB. Potentially you may have a problem there as well. Perhaps you could connect the battery with two soldered wires.

You missed the fourth component. But that's not surprising, seeing as how it's barely there.

Under that blob of black epoxy on the bottom of the board is an integrated circuit, a bare die with bond wires connecting it directly to the PCB. This construction is called "Chip-on-Board". If that IC is dead then you won't be able to get the device working again.

The black center piece on the button is carbonized rubber. It makes a connection between the "fingers" on the PCB below it.