Why not use audio codec chip as measurement ADC/DAC?

I am working on a project that needs simultaneous ADC/DAC. The specs of the on-board ADC in typical microcontrollers are pretty weak, and separate ADC with good specs are much more expensive than audio codecs. For example, compare these three options:

(B) an I2S-based audio codec, the PCM3168A has six 24-bit, 96ksps ADCs with 17.5 effective bits (if my reading of the datasheet is correct). This also has eight DACs with similar specs. All inputs/outputs are fully differential, and the highpass filter on the ADC can be turned off. Price: $4.90.

Why not do this? Are there any unexpected drawbacks to using audio codecs for measurement?

Audio codecs are very linear and very low noise, but they are usually AC-coupled to eliminate DC offsets, and their absolute accuracy (scale factor) is not very tightly controlled, since these aspects are not as important in audio work. This makes them less suitable for general ADC/DAC applications.

The problem can be rephrased as: is it possible to apply parts with poor gain and offset stability in applications that demand the opposite. The answer is a resounding yes, with a bit of ingenuity.

I present the general concept below. It of course requires a lot of engineering over what's mentioned - the circuits are only meant to illustrate the operating principle. The choice of calibration algorithms, reference converters, switches and analog buffering and signal processing will determine the performance of the design.

The general requirement is to have one extra DAC channel more than n, the number output channels. A reference ADC is also required. Each output channel can be taken from one of two adjacent DACs. The ADC is fed output from one of the DACs. While n DACs feed the outputs, one is feeding the ADC and undergoes calibration. Once calibration is done, the DAC is returned to its output duty, and the next DAC is attached to the ADC. 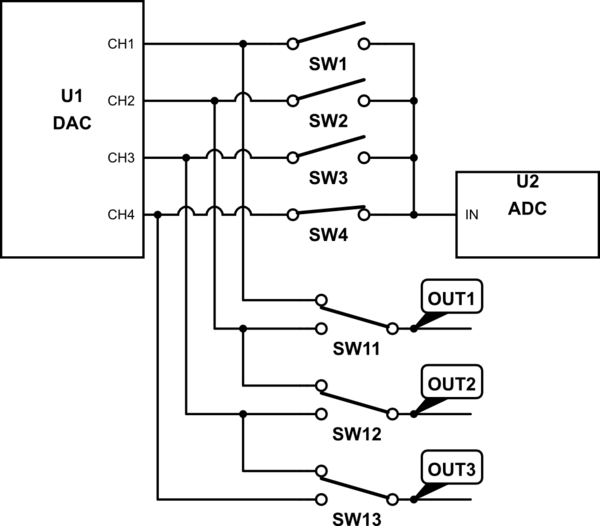 The example above shows a 4CH DAC used to obtain 3 outputs. The switch positions are as below:

A test waveform is applied to the channel under calibration, and captured using a "decent" ADC. There are plenty of affordable, DC-accurate ADCs, even sigma-delta ones. The captured waveform can be measured to derive calibration coefficients - at the very least the offset and gain. The calibration itself is done digitally on the binary data fed into the DACs.

For minimal switching glitch feedthrough, the output selector switches can be optically actuated MOSFETs. Each of the pair of single-pole switches comprising a pair SW1x can be phased to operate with overlap. When both poles of SW1x are connected to the output, the output is effectively an average. For a little bit you need to feed two channels the same output data. Do note that each channel has a different calibration, so feeding same output to two channel DACs requires feeding different binary inputs.

This concept, when properly developed, can be used to produce very accurate, high-performance outputs at a very reasonable cost. If you're careful, you can get 16+ bit accurate channels for a couple dollars. Since most audio DACs produce small amplitude signals, one needs signal scaling and amplification. Any signal processing stages should be within the calibration loop, unless they are sufficiently DC-accurate. This concept also inherently ensures diagnostics of each channel.

The same approach can be applied in reverse: have one extra ADC channel, and a reference DAC. The input to each ADC can be taken from three sources: either one of two adjacent input channels, or the reference DAC. While n ADCs sample the inputs, one is sampling a reference signal from the DAC and undergoes calibration. Once calibration is done, the ADC is returned to its input duty, and the next ADC is attached to the DAC. 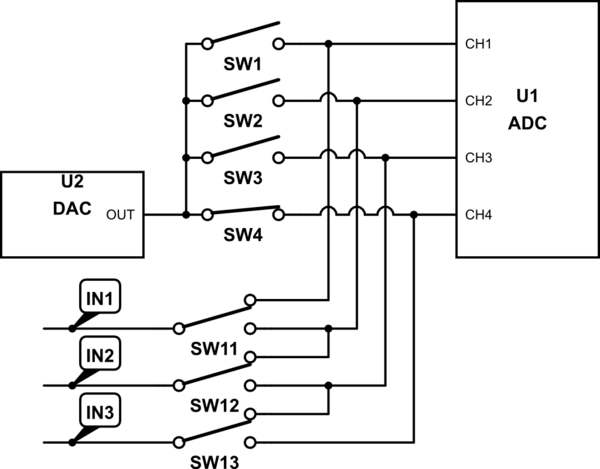 The example above shows a 4CH ADC used to sample 3 inputs. The switch positions are as below:

Not the answer you're looking for? Browse other questions tagged microcontroller adc measurement or ask your own question.

4
How to use an audio codec as an ADC?

6
High Quality Audio ADC and DAC with Embedded
4
How to use an audio codec as an ADC?
2
Differential ADC for Load Cell Measurement or In. Amp?
3
ADC/DAC Calibration?
13
PCB microcontroller layout in a mixed-signal system
15
What's the highest precision achieved for an ADC?
0
Input/output from unsynchronized ADC/DAC
0
How do I convert ADC single-ended output back to voltage (ADS1115)?
3
ENOB and oversampling ratios for delta-sigma ADCs (in relation to CS5343)