How to connect large traces to pads in PCB?

I am designing a PCB, and 10 A-15 A current is flowing in a trace. I think a 300 thou track should be used for 1 oz Cu-thickness. I see that it is impossible to connect two pads with a 300 thou track, because it violates design rules and also other pads are included into the trace, which is undesired. 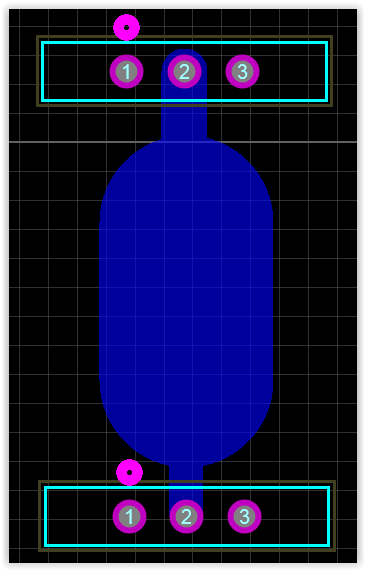 What I ask is:

Can this connection carry the current that a 300 thou trace can carry? Which measurements must be taken?

There are two values you need to worry about: voltage drop, and power dissipation. Both are simple Ohm's Law and are functions of the trace resistance.

The trace resistance is a product of its cross sectional area, and its length.

So you can have a shorter run of a narrower trace and still handle the current.

The formula for calculating the resistance of a trace is:

Of course, with etching and other factors it won't be as thick, nor perfectly rectangular, so reduce that a little - let's say for the sake of convenience it's 0.0000002m².

So once you have the resistance, and you know the current, you can apply simple Ohm's Law to it. Say 15A, your upper value.

So now you can calculate what the voltage drop and power dissipation would be over your small traces to see if it's tolerable.

There are also various tricks you can employ for handling larger currents. One of the most common (and old-school) is to leave the traces unmasked, then flood them with extra solder. This massively increases the cross-sectional area thus reducing the resistance. You can also use electro-plating to achieve a similar result, though this is considerably harder to do, especially in just a small area of the board.

Using wires instead of (or as well as) traces can also be done.

As an aside, you should also consider if the connections, and the pins used in your connectors, are suitable for carrying up to 15A.

So calculate how much temperature increase you can afford and just keep the length of the thin traces as short as possible. There is no absolute minimum per se.

Just as the strength of a chain is only strong as it's weakest link, the current carrying capability of a trace is only as good as its thinnest section. For the sample you provide, it is the 60 thou section. Although the "extra" copper provided by the thicker section helps with heat removal, it does nothing for the current carrying capacity of the trace. So, the number you should use for the calculations, should be 60 not 300 thou. If the 300 thou trace is good for 15A, then the sample trace would be good only for 15A x (60/300) = 3A.

30
High PCB copper thickness: What are the pitfalls?
7
What is a suitable temperature rise for PCB traces?
0
Copper weight/thickness current capacity
7
What is the name of a footprint that is designed to let you cut the trace between two nets?
0
Sigfox RF module TD1208R: design a 50 ohm microstrip line on a PCB (Proteus ARES)
4
Routing thick high current traces to small SMD pads?
5
Routing large RF trace to small SMD pad
0
Designing PCB with AC Live and Neutral on two layers
0
PCB Trace Width : Common (LINE) Trace for 2 Relays