Difference between an inverter and a buffer with active low input

In logic diagrams found in datasheets (e.g. Texas Instruments 74HC316) I've often seen both inverters and buffers with active-low inputs ("negated buffers" or "inverting buffers" or whatever they are called).

I wonder why they use different symbols, since from a logic level point of view they act the same (output is the logical NOT of the input after all).

Are there some differences in the implementation of the two? It seems to me that it is also manufacturer-dependent, since the datasheets of the same parts from other manufacturers may also use plain inverter symbols instead of "negated buffers" (e.g. NXP 74HC3416).

There is no difference. Many times the choice of where to draw the bubble is made as to where the signal level is active low. As such the symbols that you show can be implemented with the same circuit or chip.

In similar manner experienced engineers will also choose to draw other logic gates on the schematic according to the actual usage as to where the low true and high true signals are located. Thus it is possible to use gates on the left below as the logic equivalent on the right. The part data sheets most often shows the left symbol but, depending upon the logic being represented in the schematic, the right side symbol will be more intuitive. 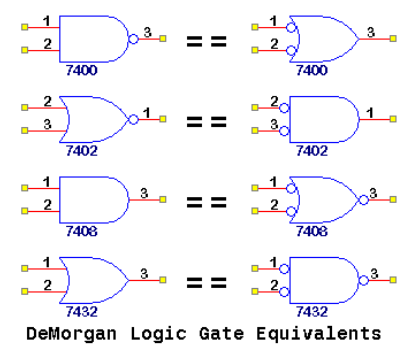 1
Why is XNOR gate not referred to as an "Equality" gate?
3
Proper Arrow Directions for Off Page Connectors / Symbols...
2
Difference Between - (Minus Sign) and Chassis Ground in Schematics
1
what to do to prototype with logic gates?
0
What is the difference between high and low frequency IGBTs?
11
Is Texas Instrument wrong with their pin number on TO-92 package?
3
Why is there a big difference between the temperature parameters of these regulators with the same name?
3
Is 23.8°C/W junction-to-ambient thermal resistance for a TO-220 in this datasheet with or without a heatsink?