Need help with basic filter design. Firstly there is a low-pass filter(pictured below). 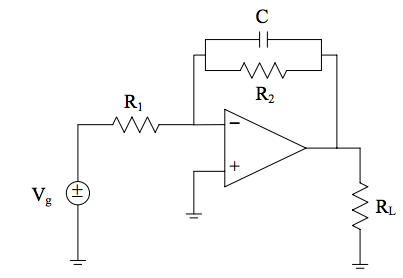 I am supposed to derive an expression for the amplitude of the output voltage as a function of \$R_1\$, \$R_2\$, \$C\$ and \$\omega\$. I am kinda lost at how to do this, I know you are supposed to add the impedance of the parallel \$C\$ and \$R\$, but how do I factor this into the voltage equation? I know the \$R_{\text{load}}\$ isn't in the equation but does it do anything at all or is it just meant to show you there is a load connected?

From the equation of the amplitude of the voltage I'm supposed to then design a filter that meets the following requirements.

The second filter is a just an alternative circuit for filter design that is shown below. 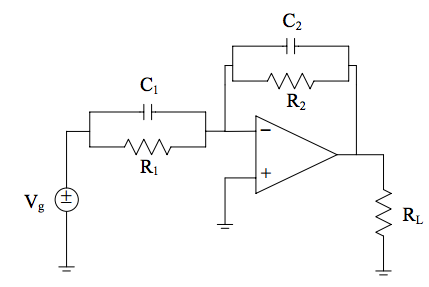 Any help would be much appreciated, I then have to write Matlab code that solves the circuits for different frequencies. Pretty sure I can do this. I'm just looking for a point in the right direction.

I have done a fair amount of work on this already, solved for what I think is \$A(\omega)\$ for the first circuit and when running the Matlab code I created it seems to work, however I can't be sure that I'm right and would love someone to post what they get. I can post work if needed however my phone is old school so the image quality is terrible. I'm just looking for a point in the right direction, any help is much appreciated :). Thanks.

Let's get you started on just the first filter for now.

An ideal op amp can force the output to any voltage necessary regardless of the load so \$R_{L}\$ does not affect the transfer function.

For the DC gain you simply set \$\omega = 0\$ in the transfer function and solve for the resistance values that give you \$|A(j\omega)| = |A(0)| = 1\$. Note that the capacitor does not affect the DC gain since it is an open circuit at DC. Mathematically

and infinite impedance is simply an open circuit. The above limit should also provide some insight as to why \$\omega = 0\$ corresponds to DC. As \$\omega \to 0\$ the frequency gets lower and lower until it's just a constant value -- i.e. DC.

Recognizing that the capacitor is an open circuit at DC you can ignore it and simply set \$R_1\$ and \$R_2\$ to give you a DC gain of \$1\$ (by inspection, this is \$R_1 = R_2\$). The resistors aren't fully determined by the DC gain requirement, they just have to be equal. You can choose a reasonable value like \$1\$k\$\Omega\$ for them. (I'm assuming the specified DC gain of \$1\$ is an absolute value since you have an inverting topology -- there's no way to make it positive.)

The last part about "physically realistic" values means that you can't use very specific values for your resistors and capacitors like \$1074.23\Omega\$. Choose standard resistor and capacitor values which come the closest to your desired cutoff frequency \$\omega = 1000\$. Use series and parallel combinations of resistors and capacitors for more accurate values -- e.g. you can form \$500\Omega\$ out of two standard \$1\$k\$\Omega\$ resistors in parallel.

Not the answer you're looking for? Browse other questions tagged operational-amplifier filter circuit-analysis low-pass or ask your own question.

8
Trying to determine the output of a RC-filter with load
0
Narrow bandpass filter using maximally flat LPF prototype design
0
How can we calculate the transfer function from this filter?
0
Multiple feedback low-pass filter design
0
Natural frequencies of a bandpass filter
0
Analysing circuit for digital filter design
0
Time constant of pole / zero of filter
1
How do I calculate the transfer function of this basic terminated RC filter?
1
Band stop filter RLC circuit frequency response