The above is the specifications of a wheelchair DC motor I'm trying to use as my hobby project.

Sure, they can print anything they want on the sticker. As you noticed, \$24\:\mathrm V \cdot 3\:\mathrm A = 72\:\mathrm W\$. To get 320W in any sense (mechanical, electrical, or thermal power) would require more voltage, more current, or both, or a violation of the law of conservation of energy.

My guess (since the sticker is too brief to say): "320W" is the maximum theoretical mechanical power this motor could produce.

A DC motor driven by a fixed voltage has a maximum no-load speed, and a maximum torque which is developed at zero speed. That maximum no-load speed is limited by the battery voltage (here, 24V), and the maximum torque is limited by the stall current, which isn't specified but which is probably (a lot) more than 3A. You can get a rough idea by measuring the winding resistance with an ohmmeter, then calculating what the current would be into that resistance at 24V with Ohm's law. Sometimes you have to jiggle the rotor to get the commutator to line up.

A linear function then describes the torque vs. speed relationship for a given motor, at a given voltage. From Understanding D.C. Motor Characteristics: 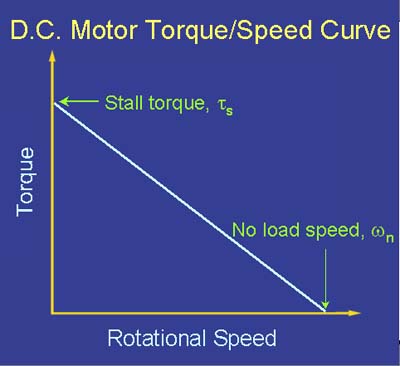 "320W" likely refers to this maximum theoretical mechanical power. Of course, the motor will overheat if you actually run it under those conditions for very long. Briefly however, it will be fine, as long as you don't generate more heat than would be generated by 3A continuously, or generate so much torque as to damage the motor mechanically.

In my opinion this is the nominal specifications. And the power is written as peak :) This is like on cheap stereo written for example 3000W, but the RMS is always hidden and much lower:))

Anyway, i think this specification of power shows peak power or stall current.

If you want to use it for wheelchair this is not the motor you need. Because it is C.C.W - counter cock wise, that means this motor isn't recommended for clockwise turning. It is limited due to angled brushes. H-class is insulation class. H stand for 180C.

We used the same one in our wheelchair. Basically 320watt is safety power operating rating for the motor at load condition. Our wheelchair takes continuous 30-40amp with good grades. This doesn't mean that motor will burn @40 or even 100amp, because of the PWM Controller. It follows this equation:

So with a heavier load the controller reduces the duty, reduces speed and the average voltage. It may be possible get 50amp continuous, for times more than a minute.

I suggest you hook up the motor to a (current limited) 24V power supply and measure the current under various conditions. I expect you'll see it draw about 2A under no load, and this current will increase when you put a load on the motor. It is well possible that if you stall the motor, it will draw more than 13A (320W) and as such, your driving circuitry needs to be able to shut down or limit the current to prevent burning out the motor.

Basically maximum current can mean a number of things:

The conclusion is that the information on the nameplate is insufficient to determine either. Assuming all values are somehow correct and it isn't a 70W motor or the current rating is actually 13A, measuring the motor's behaviour is your best bet.
Also, good info here.

Not the answer you're looking for? Browse other questions tagged motor or ask your own question.

8
Limiting current for a DC motor
0
Can the output of two 15-amp motor drivers be hooked up in series to achieve a 30-amp tolerance?
1
Running a 4-DC motor Circuit
0
How can I calculate DC motor continuous current?
0
What determines how much power the motor 'draws'?
1
Switching the leads of a high current motor
0
reg:PMDC motors attached to Gear boxes
3
Motor current consumption and power do not match