Why is the digital out acting as ground on arduino?

I was following LED Light bar project in Arduino Project handbook and I noticed some odd behavior in the Arduino.

I accidentally didn't ground the back half of the breadboard (because I didn't realise there was a break see in the circuit below). I figured that out but noticed it seemed to make the digital pin 2 behave as ground and not light the LED when the ground wasn't connected to the back of the bread board. I tried Googling this but can't find any explanation. can anyone explain why this happens?

UPDATE To make it a bit clearer I thought it was acting as ground because before I connect the ground between the right and left of the board (the connection I originally forgot to add, see the image) I would of expected only the front 4 LED's to light but what appears to happen is all BUT the LED connected to pin 2 lights up. When I bridge the gap in the ground rail all LEDs including the one connected to Pin 2 Lights hence why it appeared to me to be acting as ground, as the LED clearly works. 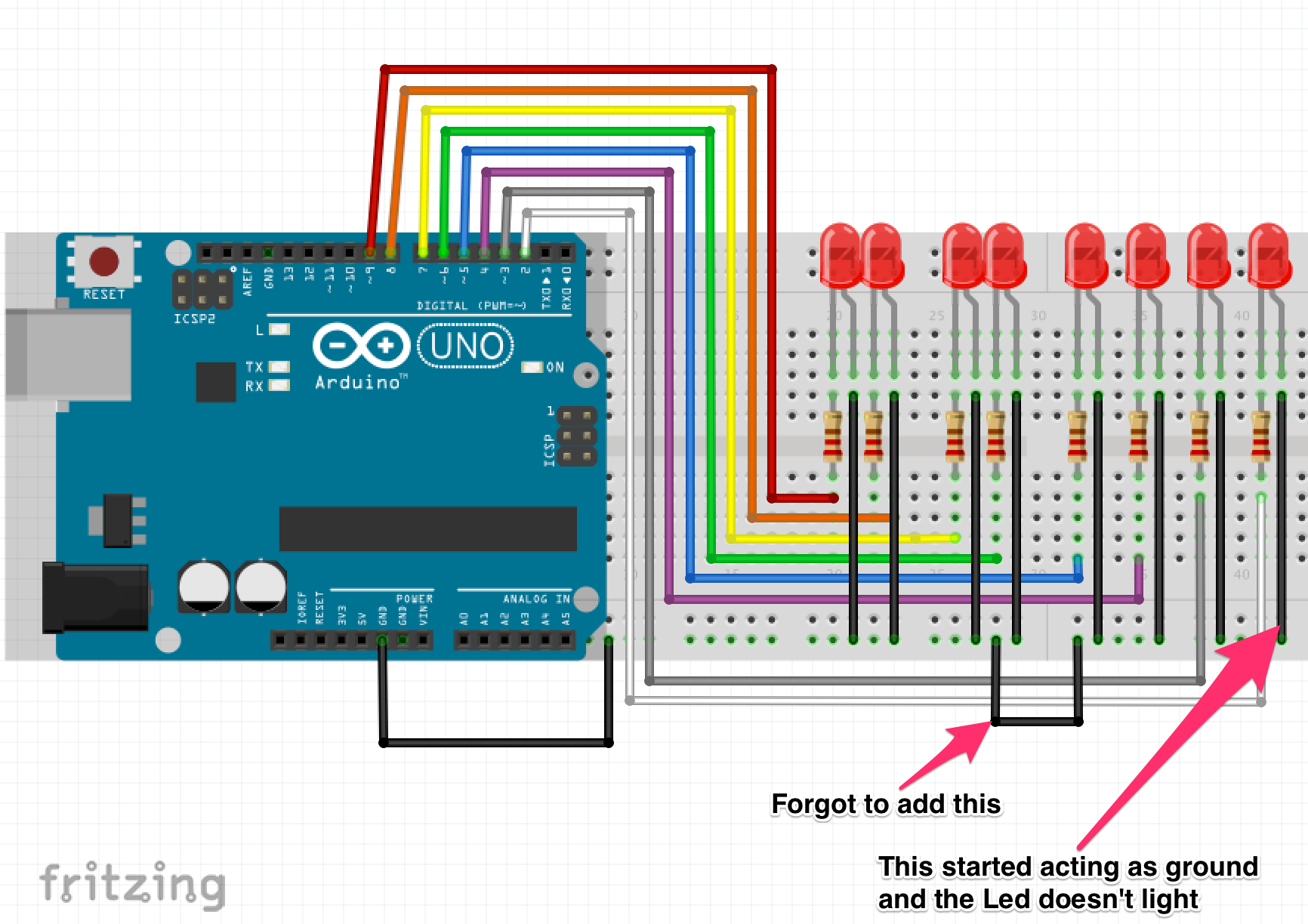 Update 2 Here is a video of the result: http://youtu.be/5dg0PHDOorA

When an IO pin is configured as an OUTPUT, and is set LOW, it is effectively connected to ground through a MOSFET.

You get a reasonably low resistance between the IO pin and ground.

As long as you don't exceed around 25mA through that pin, then all is well, and that technique is often used for multiplexing of LEDs etc.

The arrow in your diagram points to node which is in fact supposed to act as ground; you ensured that by adding the missing bridge on the breadboard.

It seems that you believe that pin 2 is at ground because the LED isn't lighting. However, that is insufficient evidence. LEDs can fail to light for any number of reasons, including being broken.

To troubleshoot this, you should use a multimeter. Firstly, disconnect the LED and measure the no-load voltage on pin 2. ("Voltage on pin 2" means the voltage between GND and pin 2). This is the first thing: verify that pin 2 is actually doing what you think it is programmed to do.

If so, then re-connect the LED and measure the voltage again. If it really drops to zero, it looks like the LED and resistor are shorted; or possibly, the breadboard.

If the voltage is high with the load connected, but the LED isn't lighting, then there is some connection problem in the breadboard, or the LED or the resistor are bad. Try substituting parts, one by one; first a different resistor, then a different LED.

You can test your resistors with the ohmmmeter function of your multimeter. Since they produce light, you can test LEDs with a simple circuit: a voltage source, series resistor and the LED. In addition, some multimeters have features for testing diodes (they can send a current through a diode and tell you the voltage drop).

To troubleshoot circuits you have to form numerous hypotheses based on your best knowledge, and then test those hypotheses one by one.

4
controlling singing-dancing santa with Arduino
7
Arduino Question regarding the resistor
1
Arduino: Common Ground Issue? Powering Buzzer, LEDs via transistor as a switch
1
How should I wire up ground when using an ATX power supply to power an Arduino and several LED strips which in return are controlled by the Arduino?
3
Arduino MEGA 2650 R3 pin 13 LED is always on, unless I connect a multi-meter
1
ULN2003 current flow through non enabled pins
0
LED strip lights not working properly on DC power