I would like to know why by adding two resistors in series we would get a sum of it's resistances.I know by Ohm's Law that since $$R=\frac {V}{I}$$ it's certain that you would attain the equation $$R_t=R_1+R_2$$

But I would like to have a practical definition on how resistances in series produce sum of it's resistances.

Could anyone help me understand why my expectation is wrong? 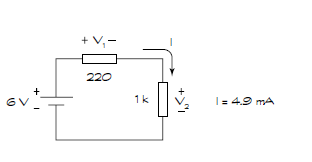 It doesn't. However, the resistance of the first resistor influences the voltage across the second resistor.

Clearly, the resistors in the diagram are series connected thus the current through each resistor is identical.

By Ohm's law, we have

By KVL, we have

In other words, the current \$I\$ depends on the sum of the resistances (series connected resistances add).

The voltage across the second resistor can now be written as

and so, as first stated, the resistance of the first resistor influences the voltage across the second resistor.

There is one critical error in your reasoning:

The "voltage through the circuit" is not a well defined concept. Ohm's law for a resistor states that \$V = R \cdot I\$, but you need to be very careful to use the voltage and current appropriate for the specific resistor.

You can imagine that from the point of view of R2, all you know about are your own two ends ("terminals"), but you can't see anything else going on farther away in the circuit. In this case, R2 can't "see" the voltage on the positive side of the 6 V source because it is on the other side of R1.

Once you use the correct voltages in Ohm's law, the reason why the effective resistance of series resistors is a summation is derived in Alfred Centauri's answer. Note that he talks about the "voltage across the second resistor," not the "voltage through the circuit."

You only need to know the voltage across the resistor itself. In your example V2 is the voltage across your second resistor so if you find V2 you will notice that the same current will flow if you take 6 Volts divided by 1K +220 as does if you take V2 going into 1K. for your excersize ill let you figure out what V2 is, a big hint is to use voltage division formula.