Is the damage on this circuit board too much to be fixed? (pics inside!)

So a few weeks ago, my boyfriend's 32" flat-screen TV popped like a firecracker while I was watching it (and scared the hell out of me!), followed by a burning smell. This is the third device of his to fail on my watch (the first and second being his hard drive and a lightbulb, which I recovered and replaced respectively)... It's just a string of bad luck, but I couldn't help feeling guilty, even though they failed through sheer coincidence and no fault of my own (honestly!).

I unscrewed the back panel and took a look inside. At first, I thought that it was just a popped resistor and some damage to the nearby connector. Upon further inspection, however, I noticed there's another spot on the bottom of the PCB that's popped and burned through. Also note the puffy capacitors, which probably caused the cascade of failures. 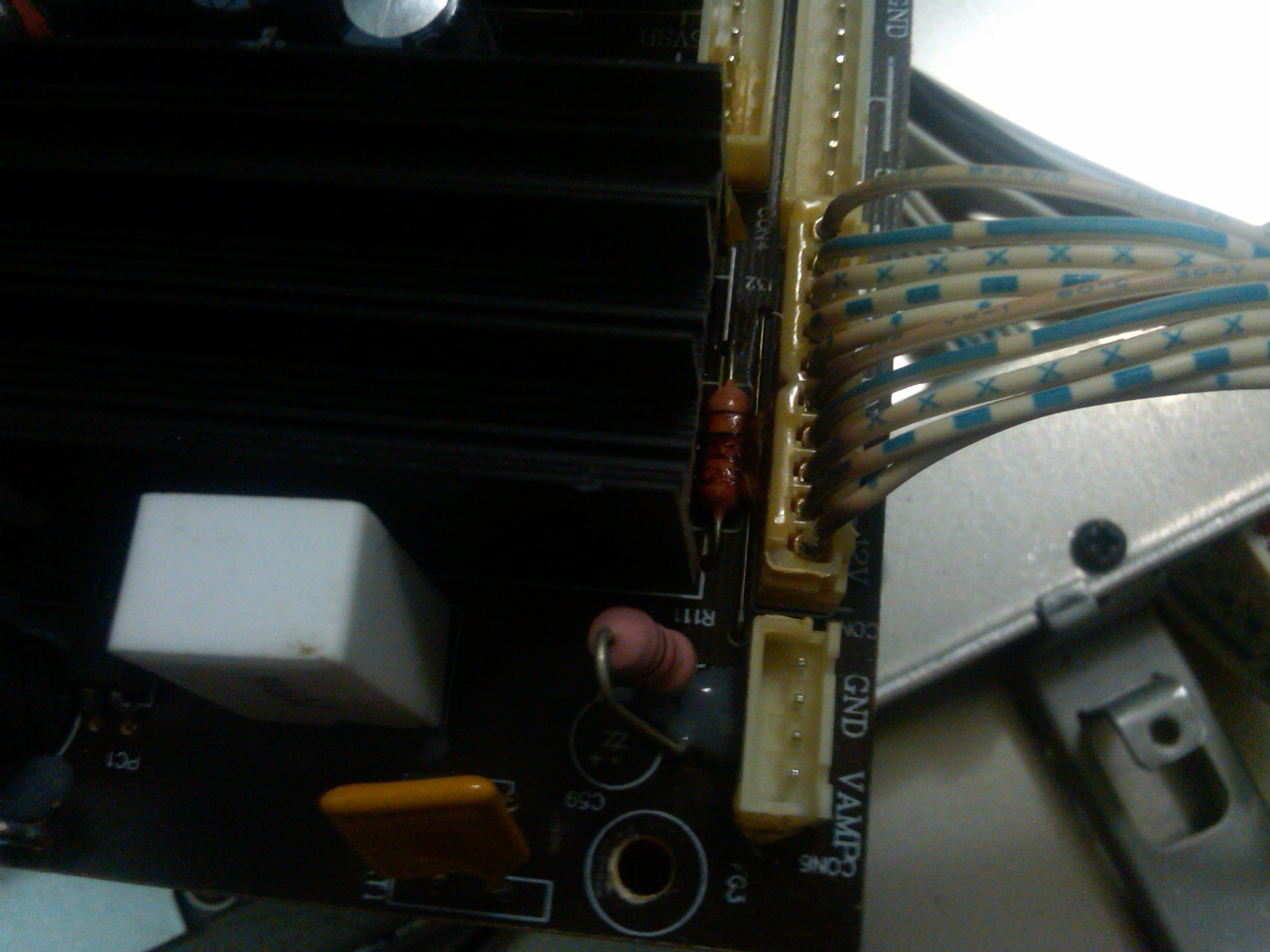 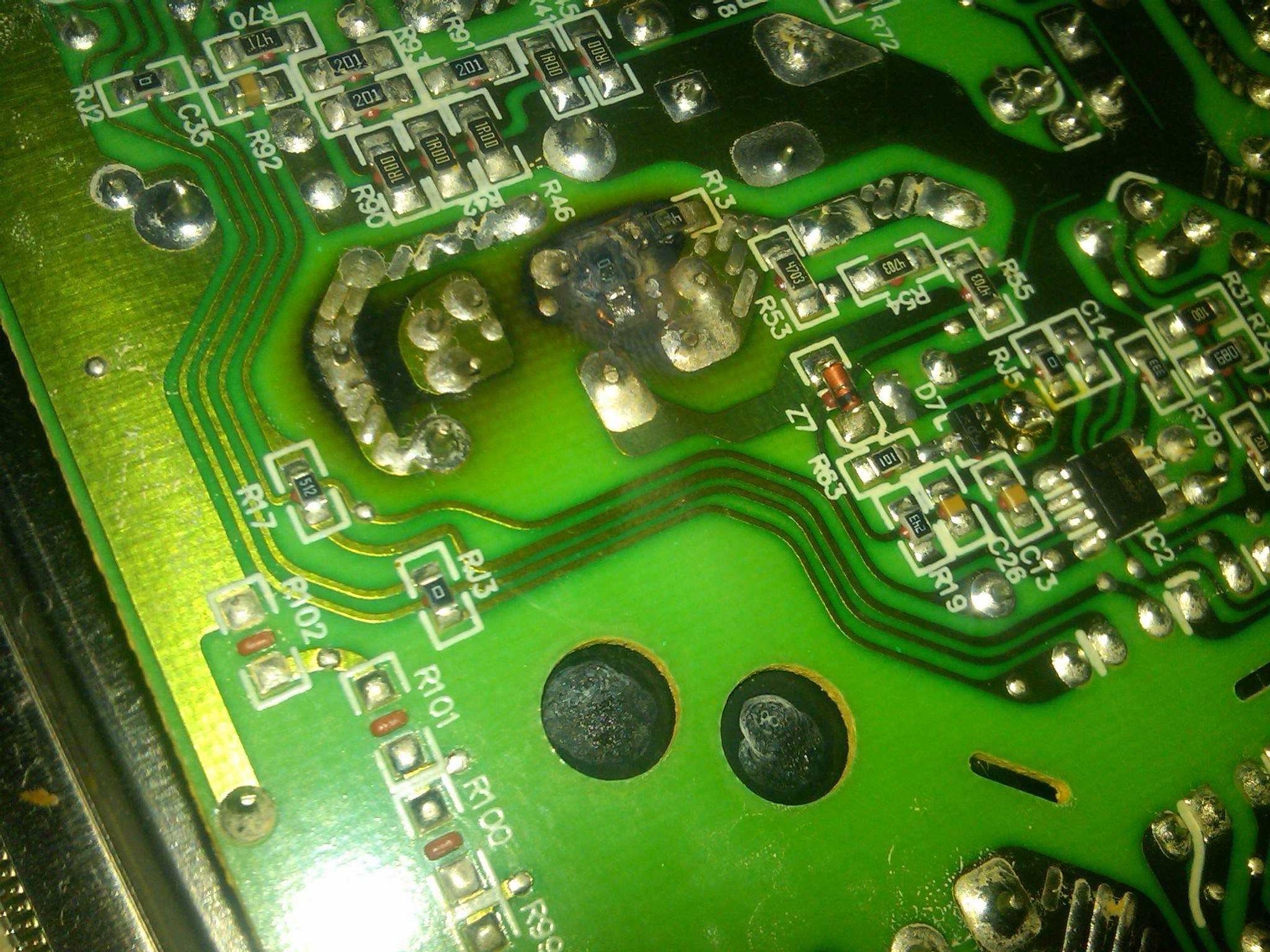 My primary question to you guys is: Can an average electronics specialist with standard soldering tools fix/replace all of the components that are damaged on this board? Or is it too far gone to attempt a repair without highly specialized equipment? Also, I've heard that some companies can make you a PCB given a schematic diagram... Think I could just ship this to one of them and have them make me a new one? :)

If so, my secondary question is: What kind of connector do I need to replace the damaged one? It's a linear 10-pin connector (as you can see in the picture), with a spacing of 2.25mm. Can I use any connector matching the shape and pitch requirements as long as I have a matching socket piece? And what kind of crimping tool do I need for the pins? I'll probably have to cut that whole end off since it's damaged.

Forgive my ignorance, as I'm a computer scientist and not an electrical engineer, but I'd just like to know whether it would be worth my time learning how to fix it, or if the whole thing should just be trashed.

First off, I'm going to presume that the TV is out of warranty. If it is still covered, your best bet is to call the warranty line and get it fixed that way.

It's hard to tell from your popped resistor photo, but is there a heat sink to the left of it in the image that is black? There might be something under there that blew out too.

As for DIYing the repair, you could try swapping out that through hole resistor that blew. However, while it's common for low quality capacitor to give out, resistors don't usually pop unless there is an over current situation, so there might be a larger issue at hand here. It also looks like there are 0 ohm and a 47K (? hard to read) ohm surface mount resistors in the damaged area on the back of the PCB that might need replacing.

If it's currently broken, there's no harm in attempting a repair. Find a friend who does electronics to help you source the parts, especially if you think you'll need to replace those surface mount resistors.

As for getting a replacement board, rather than having it replicated from scratch, you should be able to get a replacement board. The various boards in TVs are usually modular (power, tuner, etc), and that appears to be the power supply board. Try searching for "TVMAKE TVMODEL Replacement Power Supply Board" and see what comes up. I know the Vizio 50" plasmas have a nasty habit of blowing power supplies and thus they're pretty easy to find replacements for online.

Good luck and stay away from your boyfriend's books lest they burst into flames. ;)

Assuming you can diagnose and fix the underlying fault, the physical damage is entirely repairable - where the PCB has carbonized, you need to dremel off all the black stuff and dig down to clean material. Once fixed, a coat of PCB laquer or conformal coating over the demelled area is a good idea to prevent long-term moisture absorbtion into the rough surface left from the digging.

As ducksauz noted if it currently isn't working you are not going to make it any worse. Having said that, while you can find and replace the damaged components, it might be more difficult to find out what caused the damage. It is very possible that after spending time and money to fix what you see, as soon as power it back up, everything you just replaced will burn up again.

If you want to try to fix for the experience of fixing it, go ahead. If you want to get a working TV, you might want to price a new one.

Not the answer you're looking for? Browse other questions tagged pcb capacitor resistors damage or ask your own question.

0
What can cause this damage to the GPU?
4
What's the damage incurred by the chip on this photo?
5
What causes this resistor to fail - open circuit and no visible damage?
0
Can this circuit board be repaired?
25
Have I placed too much on this PCB layout?
0
Which side of this board is the capacitor polarity indicating?
7
Sewing machine motor repair
0
What kind of circuit board standoff is this?
1
In this circuit what is the function of this resistance in parallel with a capacitor