Why can a voltmeter still measure potential difference if it has a (theoretically) infinite resistance?

I am a physics teacher who did engineering and hated all things electrical! Hence when my students sometimes ask me how a voltmeter can measure the potential difference between two points if there is no current passing through the voltmeter. I can only assume that it is because having an infinite resistance is impossible, but I have never had the confidence to answer this without worrying about feeding them incorrect information.

My idea as it stands is that the resistance of a voltmeter is only theoretically infinite, in which case there will be a current flowing, however small, that can be used somehow by the voltmeter of a predetermined resistance to calculate the actual potential difference.

Can somebody explain whether I am along the right lines with this and help me explain this in definite terms or at least disabuse me of my assumptions and tell me the correct idea?

The underlying difficulty seems to be the belief that some current must flow to measure voltage. This is false. Since you are a physics teacher, I'll explain by making analogies to other physical systems.

Say we have two sealed vessels, each filled with some fluid. We want to measure the pressure difference between them. Like voltage, relative pressure is a difference in potentials.

We could connect them with a tube which is blocked in its middle by a rubber diaphragm. Some fluid will move initially, but only until the diaphragm stretches to balance the forces of the fluids acting on it. We can then infer the pressure difference from the deflection of the diaphragm.

This meets the definition of infinite resistance in the electrical analogy, since once this system has reached equilibrium, no current flows (neglecting diffusion through the diaphragm, which can be made arbitrarily small and isn't necessary for the operation of the device).

However, it does not qualify as infinite impedance, because it has non-zero capacitance. In fact, this device is exactly Bill Beaty's favorite mental model of a capacitor:

There are, in fact, devices that measure voltage that work analogously. Most electroscopes fall into this category. For example, the pith ball electroscope: 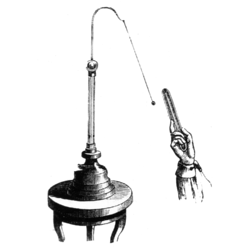 Many of these devices are very old and require very high voltages to work. However, modern MOSFETs are essentially the same thing at a microscopic scale in that their input looks like a capacitor. Instead of deflecting a ball, the voltage modulates the conductivity of a semiconductor:

The MOSFET works by altering the conductivity of a channel between the source (S) and drain (D) as a function of the voltage between the gate (G) and the bulk (B). The gate is separated from the rest of the transistor usually by a thin layer of silicon dioxide (white in picture above), a very good insulator, and like the diaphragm device before, whatever very small leakage there is isn't relevant to the operation of the device. We can then measure the conductivity of the channel, and the current flowing in this channel can be supplied by a separate battery and not the device under test. Thus, we can measure a voltage with an extremely high (theoretically infinite) input resistance.

It's relatively easy to make a voltmeter that will have a typical input current of a few fA at room temperature. That's still tens of thousands of electrons per second.

You could make a voltmeter (in theory anyway) that would draw zero steady-state current from the source by (say) balancing electrostatic forces across a gap with magnetic or mechanical force. If the insulators didn't leak and the device was in a vacuum, there is no mechanism for current flow beyond what it takes to equalize the potential on the measuring leaf with the unknown voltage.

A MOSFET works almost like the mechanism described above in that there is no inherent flow of electrons (to or from the gate) that is required to make it work once the gate is charged to the input voltage. Any gate leakage is a function of imperfections and of auxiliary structures such as ESD protection networks. A small and unprotected "floating gate" memory cell might leak one electron per day, which is pretty close to being perfect. If such a gate could be connected to your source without compromising the leakage (or rupturing the thin gate oxide with too much voltage) it would be almost perfect, except for that tiny leakage and the charge of the gate capacitance.

Nobody seems to have answered the fundamental question of how a theoretically perfect voltmeter would work. It can't. You eventually get down to quantum mechanics and Heisenberg's Law that you can't measure anything without affecting it to some degree. In voltmeters you've got to get some charge to pass to build up the balancing potential that you are using to move your indicating device. Of course, as Spehro has pointed out, all practical voltmeters are far far from the Heisenberg limit.

I think that, in order to answer this question, a pedagogic way would be to ask them why do they think that the infinite resistance is a problem in order to measure voltage.

There is no fundamental need for a current to flow in order to measure a voltage... I think the discussion would be interesting for them to understand electricity and sensors in general.

The voltmeter must have a high internal resistance so it doesn't interfere with the circuit. I think you can also talk about ampere-meters : if they are connected in series they must have a low resistance, but there are some ampere meters that do not need to be part of the electrical circuit (based on Rogowski coils for instance).

edit : Maybe you could also use some analogy with pressure/water flow.

There are electrostatic voltmeters that indeed have a "current" of zero. Basically, they work by having the electrostatic force move an almost balanced indicator needle from its point of equilibrium.

Now while those voltmeters do not take a nonzero permanent current, of course the charge must still create a field in order to cause an effect and thus is stored in the voltmeter which acts as a capacitor rather than a resistor. And if the needle works against air resistance, the charges leave at a lower voltage on average than when they entered the voltmeter, so there is work done in spite of no net current being consumed after the voltage drops to zero again.

Differential voltmeters theoretically have infinite input resistance when they are nulled. They measure voltage by adjusting an internal voltage source to match the input voltage as indicated by a zero reading on a meter. In practice, the input resistance is limited by leakage effects but, again in theory, no current is drawn from the measured voltage.

You're right about the difference between a theoretical infinite input resistance and a practical voltmeter. A good voltmeter might have an input resistance of the order of tens of megohms, at least, but it's not infinite. A tiny current will flow, and the input amplifier in the voltmeter will use that to make the measurement.

Of course, an old-style moving-coil meter will draw a current of perhaps 50uA, or as much as 1mA in the case of a really cheaply-made meter.

Since infinity is a theoretical concept, we can use calculus-style reasoning to explain it. As the meter's resistance approaches infinity, the current through it approaches zero. Although we never quite get there, we get "close enough" to believe it.

It's also worth mentioning, that there may be another kind of voltmeter that doesn't draw current. In static electricity experiments we observe two charged objects repelling each other. They push apart just from the force of the charges, and don't consume any current. So, one might construct a voltmeter from that--at least, theoretically.

Your explanation and idea are "right on." "Real" (as opposed to theoretical) voltmeters, do draw some current to generate a "reading." By using amplifiers (and/or other methods), one can approach the theoretical limit of infinite input impedance, but never reach it. So all you have to explain to your students is that they are right, it would be impossible to obtain a perfect measurement, without affecting the thing being measured. However, if we can accept a less than perfect measurement, then it is doable.

Not the answer you're looking for? Browse other questions tagged voltage-measurement or ask your own question.

13
how to measure the internal resistance of a voltmeter?
14
Why does a multimeter put more voltage to measure a smaller resistance?
2
Why measure potential with a three winding transformer?