Waveguides: How can you propagate at only one frequency?

In a rectangular waveguide, we know we can find cut off frequency as a function of mode and geometry.

Is there a way to design the waveguide so to ensure that we can limit the frequency of transmission to a single frequency?

If not, can we design the waveguide so that the frequency capable of being propagated is between $$f_a < f < f_b$$

Waveguides have a "low" cut-off frequency at which EM waves will no longer pass down the waveguide but they will pass a decent band of frequencies above this cut-off point and the theory is well known.

Where c is speed of light in the waveguide and \$\mu\$ and \$\epsilon\$ are permeability and permittivity of the air dielectric inside the waveguide. Also "a" is the longer of the two internal dimensions of the waveguide: - 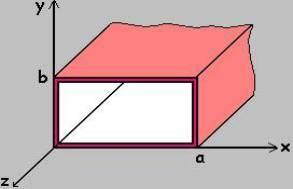 Basically, what this equation tells you is that the lowest frequency is determined by dimension "a" and that frequency has a wavelength of 2a. Half of "a" being a quarter wavelength implies an open circuit at that frequency therefore top and bottom "plates" of the waveguide are, in effect, not connected.

The maximum frequency that can be passed is a little trickier to explain and relies on understanding the modes of operation but it's fairly easy to explain that a decent band of frequencies can be passed without serious attenuation within a waveguide.

The cut-off point should be easily understood but to understand that a waveguide can pass a bunch of frequencies needs a little leap of faith (without going into the math): - 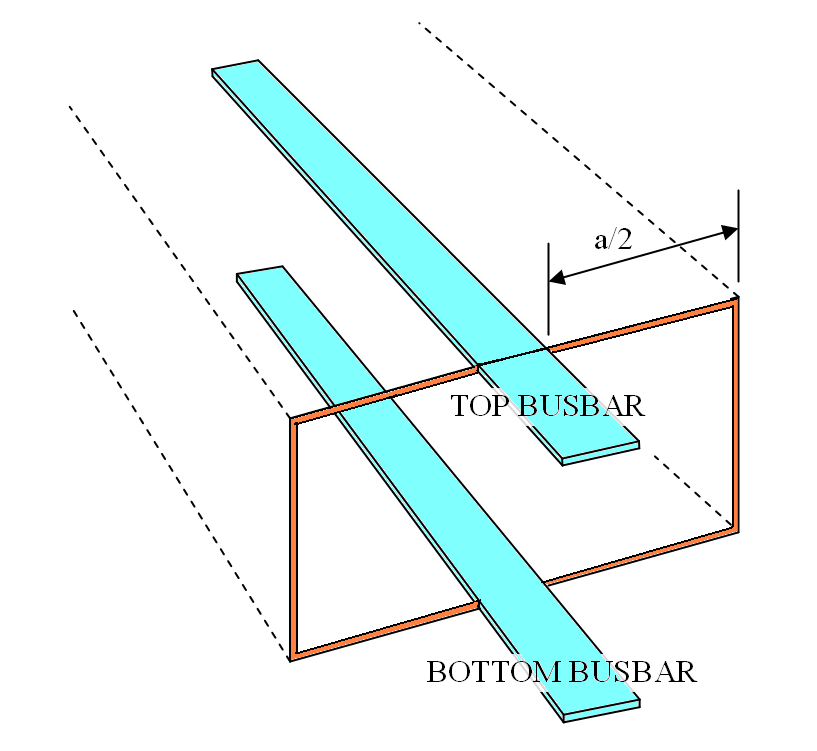 The picture above is a drawing of a waveguide and shows two "busbars" - these can be regarded as the electrical connections in or out. If the busbar is thin, dimension a/2 is half the physical width of the waveguide.

This defines the lower frequency limit of the waveguide.

If the busbar gets fatter then a/2 reduces. Whatever value a/2 is, it will be a quarter wave at some frequency and this will be an open circuit to the electrical signal applied.

Thus, waveguides can pass a range of frequencies and are not limited to exactly one spot frequency.

Andy's answer shows why a waveguide with a uniform cross section has a very broad transmission bandwidth, so it can't be used to selectively transfer a particular frequency.

But it is also possible to build waveguide structures that perform like analog filters. Within the band of the nominal waveguide geometry, low-pass, high-pass, band-pass and band-stop filters can all be produced.

As in transmission line theory, discontinuities in the waveguide structure effect the propagating wave much like discrete capacitors or inductors would do. These elements can be combined to form filters.

For example, a thin plate placed in the waveguide is called an iris, and the equivalent circuits of different iris shapes are shown here: 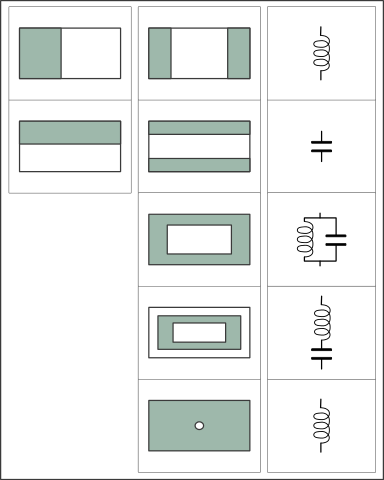 Numerous other structures are possible, including dielectric elements placed in the guide, changes to the guide cross-section, slots in the wall of the guide, etc. Filters that work by selectively coupling signals between two waveguides running in parallel are also common. For further details, see the Wikipedia article on waveguide filters.

Finally, because these structures are typically placed at evenly spaced intervals along the waveguide, they can produce quite high-order filters. For the case of making a band-pass filter, this means they can be highly selective of very narrow pass-bands.

Not the answer you're looking for? Browse other questions tagged antenna electromagnetism transmission-line waveguide optical-fibre or ask your own question.

3
Modes in waveguides
0
Using Pulse W3006 Dualband Wifi Antenna with a CPW-G Trace and Single RF_Out on MC
7
What are the waveguide modes of twisted pairs as discussed here?
1
Waveguides question
5
What makes the band of an antenna broader than others?
2
Build a horn antenna for 10.525 GHz
1
Difference between a flared and not flared rectangular waveguide antenna
1
Reflection of Electric field in open-circuited transmission line
2
Cut-off frequency in ideal waveguides
0
Can I get the S21 parameter from a one-port open, short and load reading?