What is the purpose of holes on edge of the PCB?

Here is a photo of one of Texas Instrument's RF EVMs.

Please pay attention to edge of the PCB that has multiple tiny holes. I marked 3 of them with a red circle on the photo.

What is the purpose/benefit of them? The edges are V cut, is it something to do with it? Or if it is kind of performance improvement, then how do you determine what size of the hole to use and the distance between the holes?

Here is the gerber view of the board (not the same edge), as I can see, they are just holes (not vias) 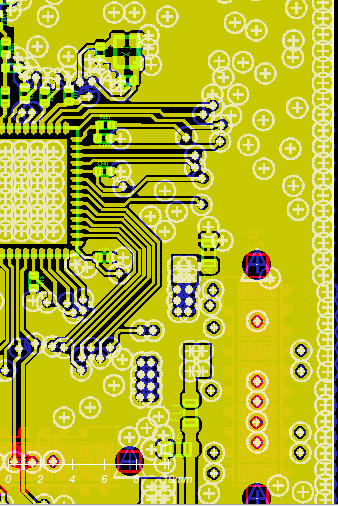 Those are vias. They are connecting that one piece of ground plane to another one on another layer.

It may be done for increasing current carrying ability, thermal transfer, EMI reduction, and any number of other reasons.

Given that it's an RF board it's most likely to help control unwanted EMI.

When you have two ground planes, and high frequency, different points of the ground planes will be at different voltages, with respect to each other. 0V is never 0V throughout an entire system, but varies due to the inductance of the traces.

Two traces with different high frequency signals in them make a nice dipole antenna. By strapping those two traces (ground planes) together you are effectively nullifying much of those voltage differences, and turning it back from an antenna to just a ground plane. And of course the effect is most pronounced at the edges of the planes, so that's where you want most of your vias. You notice there are also plenty of vias throughout the whole ground plane in an attempt to keep the potentials as even as possible.

It's called via stitching, a via fence or a picket fence.

It's typically used to control EMI at very high RF frequencies- getting in or getting out, and can also reduce the resistance of the connections at DC.

If the copper areas are joined by more widely spaced vias the loop area and inductance would be higher, and at DC more vias in parallel mean a lower resistance.

Edit: Here (from Wikipedia commons) is a photo of an RF board (an LNB). 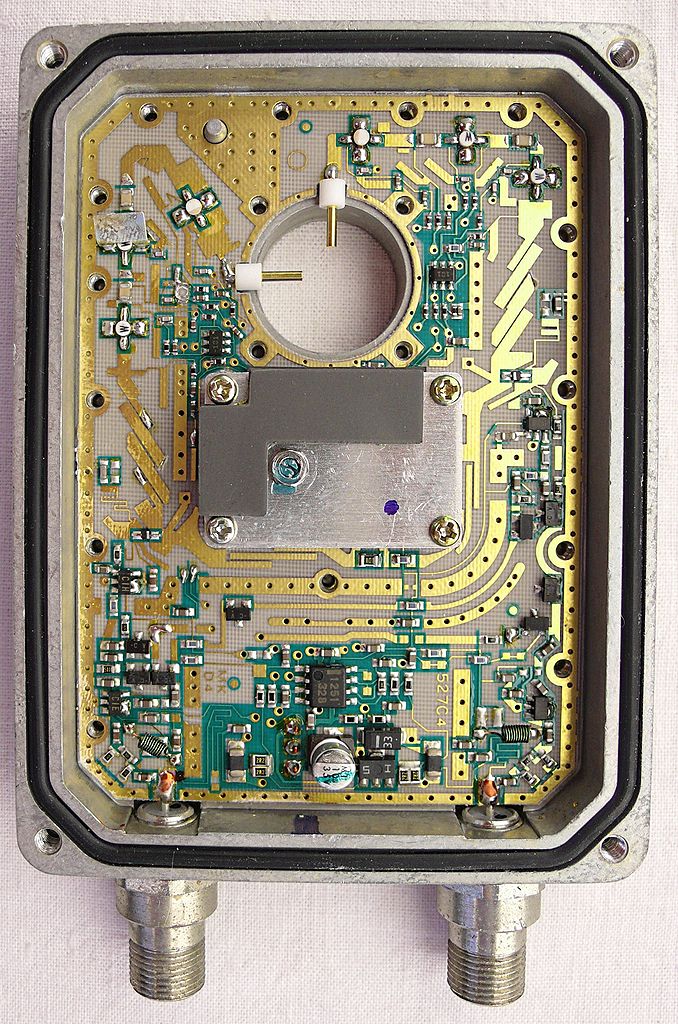 Three are three reasons why the "picket fence" or "Via stitching" is done at the edges.

1) The dominant reason is to reduce EMI, Consider it a small Faraday cage for your board. This has been covered in other answers so there is no need to elaborate further.

2) For ESD reasons. Good board design dictates that you have a ground ring around the periphery of your board. Boards are handled by their edges and in having a ring around the edge any potential ESD events get dumped into a solid ground, get conducted around the circuits and onto where ever it wants to go. Once in use this rail/ring also helps move any ESD events into connectors to the edge of the board and away. Having ground on both sides and at the edge is a more complete version of a ring and also reduces the resistance.

3) Mechanical reasons. These vias stiffen up the board. Notice that I didn't say make it stronger. When you flex a board, often the shear planes between layers tear apart vias and cause disconnects. Adding vias could very well weaken the board (in it's ultimate yield strength, you have to assess each design individually). But what it does do is make the board less flexible. i.e.; stiffer. That prevents the whole board from flexing during handling and particularly poor handling (picking a board up one handed by one edge) and moves the stress out to the edge where there is no critical vias (or at least redundant ones) and prevents flexing in the inner areas where there might only be one via.

As already stated in the comments it is shielding. See http://webbooks.net/freestuff/EMCDesignGuideforPCB.pdf, page 53.

Not the answer you're looking for? Browse other questions tagged pcb rf pcb-design pcb-fabrication emc or ask your own question.

15
What's the usage of these holes?
0
Via fences or pickets important parameters for design

16
Feasibility of PCB edge plating?
0
What are the plated holes on this PCB for?
8
How much space should be left between a PCB's edge and traces and holes
13
PCB Ground Pour, Crosstalk and antennas
1
Creating a slotted & plated through-hole in EAGLE: where to draw milling outline
7
High Frequency Characteristics of Solder-Filled Vias
2
Extending an RF ground plane outside a small PCB
0
TLC5955 Combining 48 outputs to 3 | PCB