With the aim to combine some good properties of two different opamp types we can make use of the composite amplifier principle (see the figure). For example, we could combine good (small) input offset parameters (amplifier OP1) with good (large) slew rate properties (amplifier OP2). As another advantage, the resulting combination will also exhibit an increased small-signal bandwidth (GBW). In the presented example, the closed-loop gain will be $$A_{\text{cl}}=1+R_2/R_1$$

However, we have to watch the stability properties of the circuit. For this purpose, it is common practice to investigate the loop gain (determination of stability margins). To generalize the problem, we further should discuss the corresponding block representation (\$G_1,G_2,H_1,H_2\$) as shown under the circuit diagram. 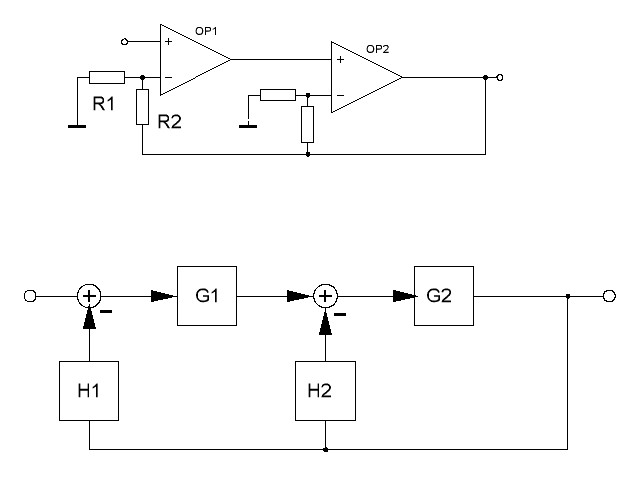 And now the following questions arise:

According to my knowledge, this question has not yet been answered in the literature.

EDIT/UPDATE: Because input/output nodes are not relevant for the loop gain(s) I have redrawn the system without these terminals. Now, we cannot discriminate between "inner" and "outer loops. 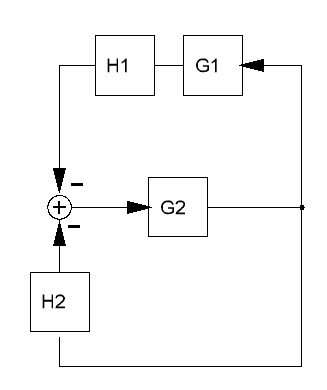 Finally, I have a simple answer to the problem:

It is required for the outer loop to be stable. The inner loop may be unstable with the full loop being stabilised by controller \$G_1\$. This is generally only done when absolutely necessary to stabilise an unstable plant.

Practically speaking, both loops should be required to be stable in a system such as this with standard op-amps.

As a rule of thumb for design simplicity, the \$G_2H_2\$ loop is designed to be stable with significantly higher bandwidth than the final loop bandwidth so that its phase delay can be neglected in the design of the outer loop; i.e. its phase/magnitude contribution to the overall loop is negligible at crossover. 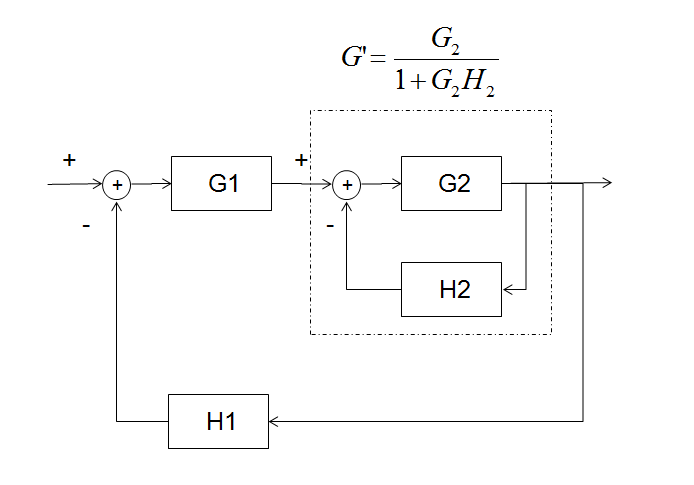 To the OP's Update: The point of which loop to analyse: A straightforward analysis of the OP's loop (also the Updated equivalent arrangement) shows the stability analysis to be: $$G_2(G_1H_1+H_2)+1=0$$

Therefore you can analyse the loop several ways and get the same result. Considering the loop to consist of an inner and outer loop, is however, very convenient.

UPDATE: Here's the analytic justification for the loop stability equation to be $$G_2(G_1H_1+H_2)+1=0$$ Apologies for quality. I hope to enter as native format when I get time: 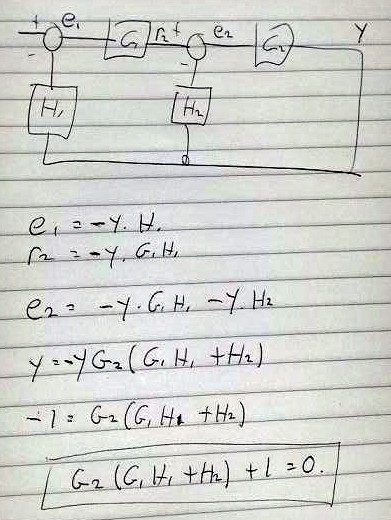 Rob Fox has done an analysis of a two loop system.

From this it seems that all loops are important.

For a given circuit one could calculate all combinations and search for the dominant loops.

The last two sentences are speculation. I try to learn this stuff.

Not the answer you're looking for? Browse other questions tagged control loop-gain or ask your own question.