How to control power to a water heater

My water heater element is rated at 3.6kW at 240V. To use solar power efficiently, I would like to use excess solar power (in a grid-tied arrangement) to heat our domestic hot water. Our electricity supplier only pays a pittance for exported power but still charges the full rate on any imported power, so the trick is to control the current to the hot water system (HWS) so that most excess solar power is consumed internally.

Would a heavy duty phase controlled triac be suitable? Would the large current switches cause problems? I do not know how the metering works, so this per-cycle method may not even register as a smaller average current. Ideally, the load should look like a varying resistance.

Would an approach like a switching power supply make sense? ie rectify the AC, then chop the current at high frequency, while protecting the supply side with large filters? I suspect this approach would cause EM noise unless carefully designed.

Are there better ways of controlling HWS power?

The inverter connects on my side of the meter, but import and export are measured separately. I am trying to minimise the bill to the electricity company. To do that I need to use as much of the solar generated power internally, while being careful not to import power during a sunny day. Eg: when solar power in = 4kW, internal loads = 2kW, I want the HWS to draw 2kW. If I export power I get 7 cents per kWh. If I import power I pay 20 cents per kWh. The feasibility of the installation hinges on whether I can vary the load to match the generation. 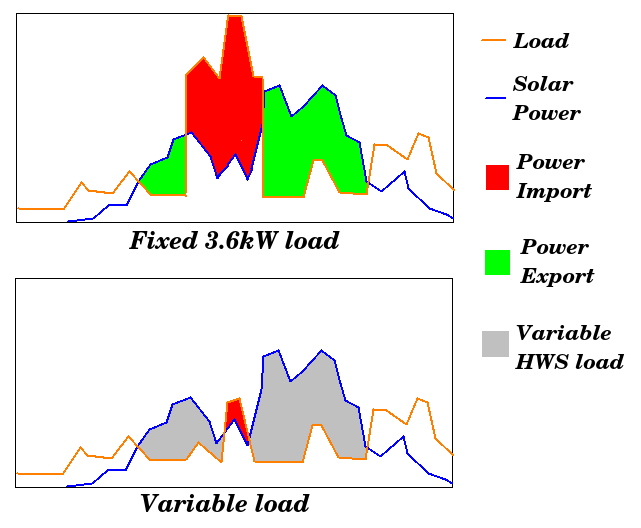 Retired technician, have been working on the same thing for a long time. 6000Watt power electronics SCARE ME. Always test behind a 3/4" plywood shield. It is currently in service and working great(except for horrid RF noise). Glad to share, hope for some help. My set up is a little different. 8000w 230v sine wave inverter(stacked Trace SW4024)(now Schnieder) from the last century. 42kwh agm batteries(salvage). 15+KW of solar panels(mostly vertical on side of buildings, 48.5° N Latitude. So many panels to get thru winter with no generator. Vertical is far best this time of year. max sun elevation is 20° or less. they put out nothing with snow on 'em. Back as far as 1999 I was bank switching sets of panels when the batteries were charged, to 72V to send to hot water tank element. Oh yeh, I'm off grid. 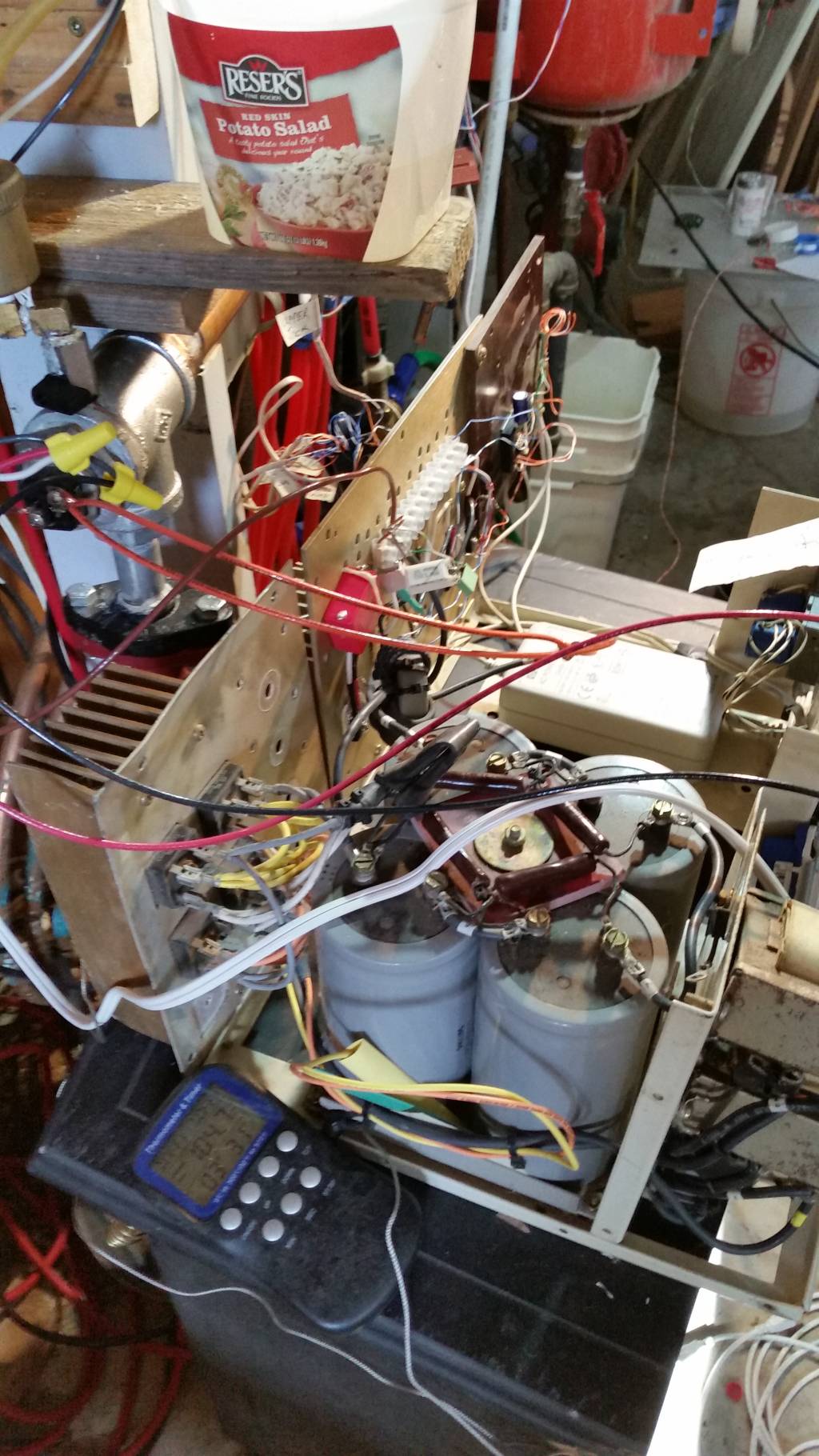 The element is in a 1 gallon per minute flow of water to hydronics in a 20cuYd cement slab, my 'thermal battery'. On our rare sunny days it only warms up less than 5 degrees. So many panels because they are so cheap now! $0.27cents/watt ($0.35 w/shipping). Without running generator, I can run propane/solar electric heat for the winter on one fill.

on the VO3120 opto-isolator K should be A

Presumably the output of the inverter fed from your solar cells is on your side of the meter. Therefore you don't get charged at all for any power you use up to what the solar panels are producing at the moment. It already works as you seem to be asking.

For example, if your solar panels (thru the ineverter) are producing 1 kW when your 3.6 kW heater is on, then you will only be drawing 2.6 kW from the line, and will only be charged for the 2.6 kW. If the panels are producing 4 kW with the heater running, then 3.6 kW goes to the heater locally, and you are actually dumping 400 W onto the line. The power company can't tell the difference between you having everything off and producing 400 W that's going onto the line, and you producing 4 kW with 3.6 kW used internally and dumping the remaining 400 W onto the line.

There doesn't seem to be a problem here to solve.

In general, the power meters measure total power over some interval, and then determine if it was 'import' or 'export' base on the sign of then total value. This interval cannot be too small -- a switcher with no load will have power factor close to zero, and thus 'export' power in one part of AC cycle and 'import' power in another part of AC cycle. It would be stupid for power meter to register it as '40W import + 40W export' simultaneously.

I have no idea what this interval is for your meter; but if it is at least few seconds, you should be doing low-frequency PWM (with period measured in seconds) and using it to control zero-crossing solid-state relay. The 'zero-crossing' part will ensure the lack of extreme currents and EM interference.

UPDATE: This document ("Import and export of electrical energy" by "Surendra Jhalora") talks a lot about import/export energy when applied to smart meters: http://www.securetogether.com/files/5113/7291/7734/imp_exp_elecl_energ17.pdf

According to it, the import/export is calculated per-cycle. If it applies to your meter (and we do not known that), zero-crossing SSR will not help.

The variable power controller design is basically on the right track for providing continuously variable output power. There is however a detail that it doesn't address and that is the temperature regulation of the cylinder. As drawn, the controller connects directly to the element without going through the usual thermostatic control. That might be ok if you can cope with boiling the cylinder or tripping the over temperature relief valve. If the thermostat is left in the circuit, its switching contacts won't last long when it starts switching DC voltages over 30 or 40 volts due to DC arcing. The arc quenching advantages of AC quickly disappear when switching DC. To remedy this, the thermostat contacts could instead provide an additional control input to the PWM control to shut it down when the temperature set point is reached. To make the best use of the solar input, the set point could also be set a bit higher, say 70 degrees instead of 55-60. This assumes that the hot water is delivered via a tempering valve to avoid scalding. Bare in mind too that the standing losses from the cylinder go up as it's temperature gets higher.

Here is an attempt at a variable power controller design. The circuit rectifies the mains current, then uses high frequency PWM to control current to the heater element through a filter (to limit EM noise).

The input inductor and capacitor will need to store only enough energy for a current pulse through the transistor. The transistor switch will need to be an array of MOSFETs rated over 500V and having a small combined on resistance . The MOSFET driver will need to float at the high voltage and provide the 10-15 Volt gate drive. The output filter is to smooth the current pulses to the element and reduce radiated noise. The final resistor pair provides a feedback voltage to the PWM controller.

I am guessing a PWM frequency of about 10 kHz would be appropriate. The higher the frequency, the smaller the passive components can be. I am also guessing that a driver exists that can cope with 350V peak AC and supply a 12V gate drive output from a 5V digital signal input.

1
Switching / dimming a high power mains heater
0
When using conventional means to control a heating element, how does it affect the peak required VA?

9
What is this high power switch symbol?
1
cartridge heater control
2
How to partially drive a load with respective impact on my electricity meter?
5
Is there a way to use PWM to control AC mains powered heater?
0
Rectifier for a resistive heater
0
exploding cartridge heater
0
What is the 'right' way for a 3-Phase Watt Meter to determine import-export Watt-hours?