You read the title and that's what I am trying to do.

Synopsis: I have a young son who is determined to catch Santa (to what ends I don't know). He even dreamed up using some kind of pressure plate and connecting it to a light that will turn on when Santa steps on it to get cookies. I would love to help him build this contraption. We have been down at RadioShack repeatedly.

More practically, I am not an EE and have minimal experience with (and time for) bread boards.

So, I was hoping some people here could give some guidance.

I have been evaluating Little Bits but not sure which way to proceed. I am thinking a pressure sensor under a carpet near the cookies that somehow trips a relay and turns on a light or something else clever.

Naturally, I don't want this to succeed just yet in capturing Santa; consider it a lesson in drafting better requirements and a more complete design. Next year we can drive a new design for catching Santa.

So, while the ultimate goal is a bit childish, is it a serious enough question and maybe I can jump start my son's interest in engineering.

A thick piece of cloth, some tin foil, card stock, glue and wire is all you need to make a simple pressure sensitive switch. Here's the pdf I made of this process years ago:

And the kickstarter video is still up which might give you some additional insight:

Connect a watch battery and a 3V buzzer as in the video and it will sound whenever stepped on.

Here's an image of the pdf: 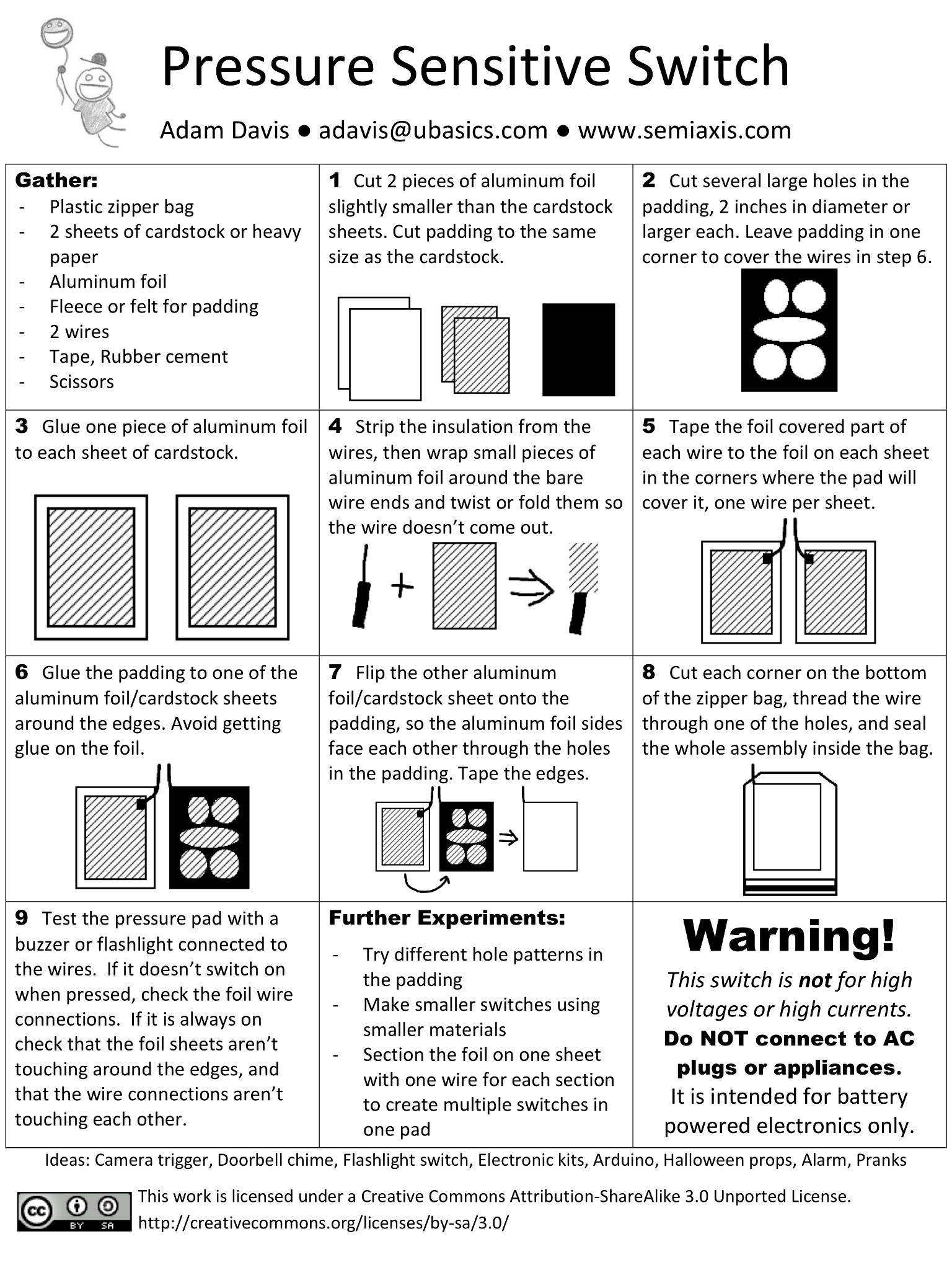 Frankly, the Little Bits kit is way overkill and incredibly expensive. If your goal is to make a simple sensor that detects pressure and turns on a light bulb, that can be done using stuff you probably have around the house.

Here's a basic idea that might be "good enough" for this year. Next year may require some more sophistication as your son's imagination develops.

Instead of a force transducer pad or something equally expensive, use a metal plate that is propped up by a small spring. When the plate is stepped on, it compresses the spring and makes contact with another plate on the floor. In doing so, a circuit is completed and activates a light source. 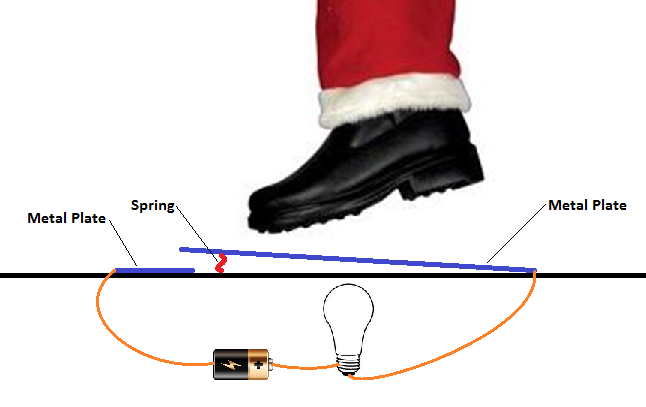 The metal plates can be cardboard or plastic wrapped in aluminum foil. Or thin sheet metal. The spring can be an actual spring or any squishable material that deforms enough under the weight of a person (or one jolly fat guy). The whole assembly can be hidden under a rug with only a slight bump giving away its presence.

When catching Santa, you want more than just a quick flash of light - stepping on a switch is fine, but the light will only blink for a few seconds. Even if the light stays on for a while, the battery will run down. Instead of a switch, you want a "latch" - something that triggers once, and locks into the "on" position until it's reset. Thus, I present the Santa Trap:

That is only half of this trap, however. It we stopped there, the motor would spin when Santa steps on the switch, but it would turn off as soon as he steps off again. And so, part two:

When Santa steps on the plate, the motor will spin. The string will wind around the motor shaft, pulling on the heavy object and causing it to fall. The object will pull down on the string on the light switch, causing the switch to flip. Even after Santa leaves, you'll have proof that he visited - the light was flipped on!

As a bonus, here are two alternate designs:

The Raspberry Pi website is on your wavelength today:

Maybe adding in some processing power could be one of the "improvements" for the new year (I'm all for starting simple, and indeed keeping simple, but this is a good opportunity to learn some cool stuff)

I assume you could substitute / augment the PIR with the pressure switch.

Not all of those would work or be reliable (or pass Elf & Safety Inspection), some would be subject to false alarm (especially if you have pets) but that's all good fun to experiment with & think about.

Ok, to all those who contributed, thank you! I combined a few nuggets from you all and a simple 6-12 volt siren from Radio Shack with a battery pack and produced the traps (See pics). We placed the pressure sensor under a carpet near the table with the cookies and milkand taped the battery pack and siren under the table. The trap was set!

I worked with my neighbor to have him come in after they were asleep on Christmas night to set off the alarm. The kids were giddy with excitement!

Twas the night before Christmas and all through the house not a gizmo was whirring not even a computer mouse. The trap was taped under the table with care with hopes that our neighbor (a-hem, St. Nick) would soon be there.

The children were nestled all snug in their beds; While visions of tablets and iPods danced in their heads;

When out near the door there arose such a clatter, My wife sprang from our bed to see what was the matter. Away to the kiddos' room she flew like a flash, to wake them to show them that Santa had made a mad dash

But alas they did not wake, no matter the noise how great.

And so it was that Santa was not fated to be discovered yet on this christmas season :) 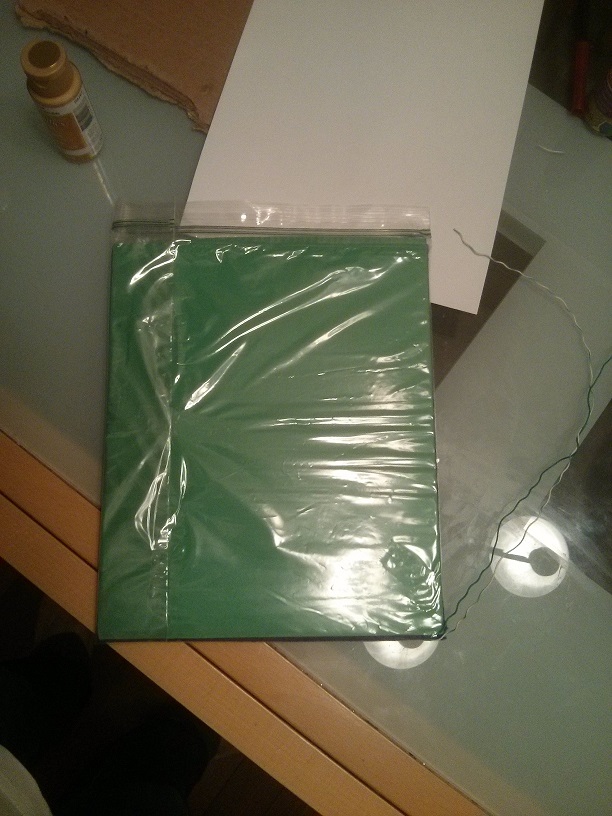 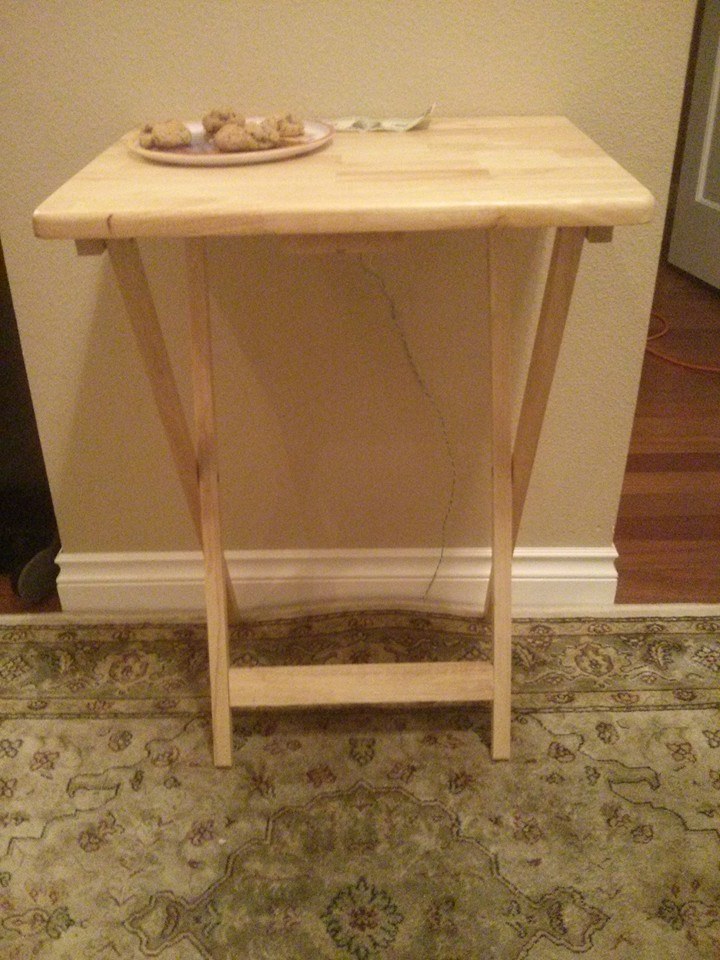 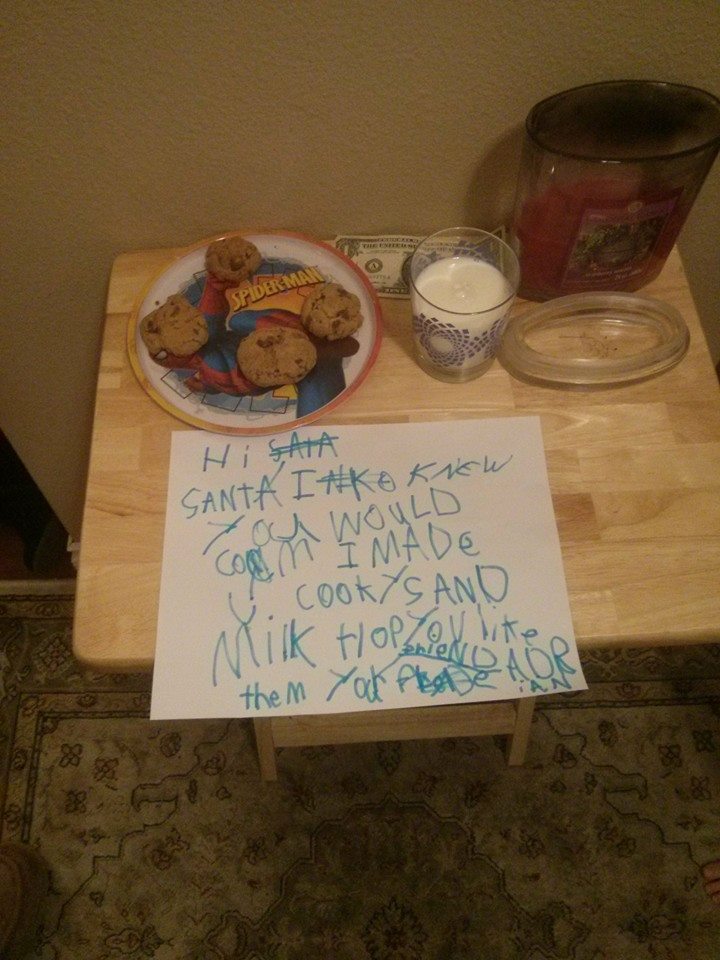 Not a complete answer, but I just want to second George Herold's mention of snap circuits -- extremely easy for kids to manipulate, price is good, and the manuals are full of plenty of examples. I recall there being some alarm circuits in there as well. If your son is showing the inclination, I'd go ahead and splurge on the largest kit they sell. (I did so for my daughters and am glad I did -- years later they've both graduated into arduino and raspberry pi stuff, and still going.)

If you want to use a light instead of an audible alarm, and want the light to be a mains-voltage lamp, you're going to need some sort of relay. I recall makershed selling something that takes 5vdc input and has a male and female 120vac plug on it -- it basically looks like a very short extension cord, with the 5v input added. That will give you a safe and easy way to control anything at mains voltage.

As far as success or failure, it should be pretty easy to arrange for the alarm to trip and Santa to escape cleanly before anyone has time to react -- he is pretty quick after all. ;-)

Take a clothespin a piece of fishing line, some tin foil/tape and a piece of plastic. Coat the jaws of the clothespin in tinfoil, and attatch a wire to each leading to the battery, light, etc. Then place the piece of plastic between the jaws, keeping the fil separated. Then attatch the fishing line to the plastic and fasten the clothespin switch to one thing, and the other end of the fishing line to another. Then all you have to do is wait for Santa to pull the tripwire, allowing the foil electrodes to come into contact ith one another and completing the circuit. Have fun :D

Not the answer you're looking for? Browse other questions tagged sensor solid-state-relay proximity-sensor or ask your own question.