SMD LEDs normally have some kind of marking like the following image from here indicates:

The CATHODE lead is always the lead to be identified with ALL LEDs, including surface-mount LEDs. 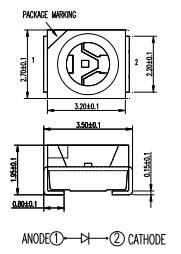 We recently had 300 PCBs manufactured where each had 32 LEDs of those. However, the assembly house placed all LEDs in reverse. The first thing we obviously did was looking at our board layout.

If you assume that always the cathode is indicated, the footprint is correct. However, it is not consistent with the marking of the actual LED that was mounted. The manufacturer probably just looked at the matching markings.

Long story short, the manufacturer checked their production and "admitted" that it was their fault. Actually, we worried that they just "but the marking says otherwise".

This could have ended up in a long discussion about who's fault this was, so:

Is there a standard that defines that the marking actually HAS TO indicate the CATHODE? Has the assembly house to double check something like this?

It is entirely per component manufacturer, and when the PCB is manufactured some companies will ask that component placement overlays are given with designators are provided and polarity marks for all polarized components are shown.

It's also a good idea to make a couple of test boards and hand solder and get familiar with the components to identify this kind of issue prior to sending in large batches to get assembled.

I've made my own altium footprints with silkscreen diode style symbol showing polarity, which sits in between the pads. It helps me with hand soldering too, and then it doesn't matter which product I get, which may have different markings. I guess there are tricky components though that even trick the manufacturer, if they do not check the mechanical data/datasheet of the component when putting it into the pick and place machines.

Good luck getting it fixed hehe, will take someone a long time.

I believe that PCB manufacturers are aware of the fact that surface mount LED can have the tab on the Anode side. I have worked before with several manufacturers and they have always asked about the proper orientation of LEDs. At first this was strange for me but it made sense when I became aware of this issue.

One solution could be to omit A and K markings and place a tab where the actual device's tab goes. This by itself could still be misleading if the manufacturer is actually aware that the tab denotes Anode. Thus, I would say that in order to avoid confusion a note should be placed either somewhere in the board or in the schematic. For example:

By the way, using C can be also confusing because it can be taken as a capacitor place.

Not all manufacturers mark the cathode. I just got some that have a green stripe, and it corresponds to the anode. Some don't have any markings, but you have to look at the datasheet and compare it to the internal connection structure. In the end, I think it's best to identify anode and cathode in the silk and/or on the assembly drawing, and supply the datasheet (or at least the datasheet drawing of the part).

If there's any doubt, test a part and make sure before you build 1000 boards!

Not the answer you're looking for? Browse other questions tagged led polarity footprint markings or ask your own question.

0
Harddisk LED Power Supply
2
Transistor With No Voltage to Base
2
LED Polarity: Why does this LED have the anode as the short pin?
0
Why does my mainboard power the cathode to turn the Power-LED off?
29
Why are the three component LEDs in an RGB LED so unbalanced?
0
How to turn on LED with only a cathode pin
2
Common cathode RGB LED from 3.3v
1
LED Controller + LED Panel with common cathode
1
Heatsink to dissipate 170W