I'm trying to make a footprint for this connector:

But I have a trouble about pinout.

What is the SLEEVE TERMINAL, TIP TERMINAL, SHUNT TERMINAL?

What is my power connection? V+ and GND?

The schematic of a typical coaxial (barrel type) power jack looks like this:

In that schematic view the pin numbers correspond as follows:

Looking at the power supply cable end the terminals in correspondence are: 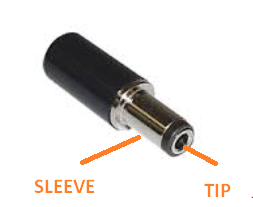 The SHUNT terminal serves as a switch terminal that opens (for most jacks) when the plug is inserted into the jack. It can be used for products that have both a battery for portable power and a wall wart for wired power. The SHUNT can be used to disconnect the battery from the load when the wired power is plugged in.

You will need to look closely at your actual wall wart power supply to see whether the TIP terminal is V+ or V-. These days it is common for the TIP to be V+ as shown in my schematic view above but the supply may be the opposite polarity as well. That is the reason it is advisable to add the series polarity protection diode (see schematic again) so that if someone tries to plug in a negative TIP wall wart that it will not fry the electronics in the device.

Not the answer you're looking for? Browse other questions tagged dc connector pinout or ask your own question.