I'm planning to build a current regulator for a power supply and I'm prototyping a number of different regulator circuits. First up, the op amp and transistor circuit shown below. 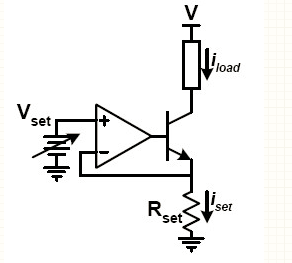 I felt I understood the principle well enough: negative feedback resulting in the opamp regulating the transistor in order to equalize its inputs to some given reference voltage. So, I pulled out whatever bits and bobs I had in the box and put the circuit together. I was aiming for a current limit of about 100mA and I wanted to keep the voltage drop across Rsense low. I had some low ohmic resistors from another project, so I used a .010 ohm resistor as the sense. Calculating the reference voltage to achieve 100mA gave me 1mV (100mA x .01R). The voltage divider shown on the left in the schematic below produces 1mV at the non-inverting pin. So far, so good... but then... many, many hours later and a lot of contemplation and confusion, I still don't understand it.

As you can see from the schematic below, the notes are the actual measurements taken using a dvm. 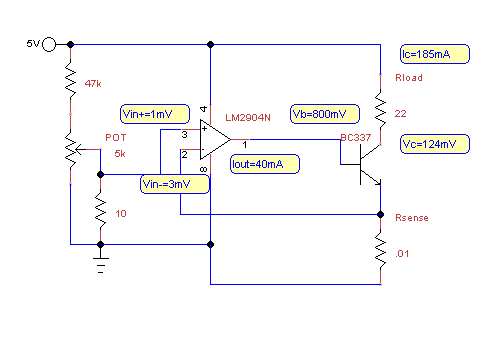 The opamp inputs are refusing to equalize. What's more, the opamp seems to be driving the transistor hard into saturation, the current almost completely owing to the 22 ohm (7W) load resistance. It's almost like the opamp is using positive feedback, rather than negative feedback. But, why so? The inverting pin is clearly reading 3mV. I'm stumped! Any help greatly appreciated.

The first thing that I notice from the datasheet is that the opamp has 3 mV input offset voltage, which is clearly biasing your circuit.

Try to use larger signals, since you have enough output voltage headroom. (100 mA * 22 Ω = 2.2 V). I'd start by using something in the order of 0.1 V as input signal, then maybe reduce it until you get too much error due to the offset.

Assuming your schematic is really how you've hooked it up, I'd hazard a guess that all your problems (except the pot burning up) are caused by the fact that you have the power and ground reversed. +5 goes to pin 8 and ground to pin 4, not the other way around.

Once you fix this, the question of offsets may or may not become relevant, but replacing Rsense with a 0.1 ohm resistor is a good idea. As it stands, though, at least half the time your circuit with the 0.01 will be able to compensate for offsets if you make a few changes. Your 10 ohm resistor is too small. Assuming you want to keep the 0.01 ohms, I'd recommend putting a 50 ohm resistor in parallel with the pot, and then running the wiper tor the op amp without the 10 ohm unit there at all. This will allow you to adjust for positive offsets.

I'd also suggest putting a 0.1 uF cap on the + input, just on general principles.

The pot burning up is a big red flag. You are doing something very, very wrong.

Not the answer you're looking for? Browse other questions tagged transistors operational-amplifier current-source or ask your own question.

1
What OpAmp configuration is used in this circuit?
5
Unstable Feedback in Opamp+MOSFET circuit for Voltage Controlled Current Source
0
Working of active clamp....?
0
Can an opamp be neither in linear region nor saturated?
0
Puzzling result from opamp circuit. Using opamp for negative reference
0
Swinging of Output Current from voltage controlled current source
1
gain of opamp circuit with current output
0
Op-Amp voltage to current converter
2
Oscillations in voltage-controlled current source with MOSFETs and opamp feedback -- Why?