Understanding the oscillation action inside this 12V DC-to-AC CKT

A friend brought this circuit to me and asked me to explain the working.

I decoded the following schematic from the PCB. 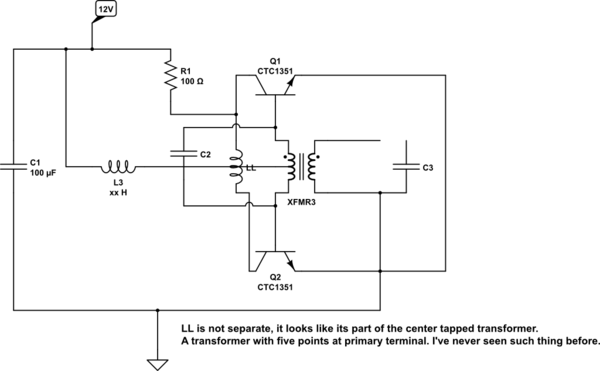 In the primary coil of the transformer I measured about 19KHz 14VAC. I am unable to understand how oscillation is being produced in the circuit. C1 and L1 looks like a tank circuit but I don't see how its oscillations are being fed to the PNP transistor and a specific feedback path.

Kindly help me decode the working of this circuit.

EDIT: It seems I mistaken the transformer primary winding taps to be short in my description. So the transistors are not short circuit or parallel.

is incorrect. Check the connections again. It makes no sense to have a tank circuit directly across the power supply. It also makes no sense for the base to just be grounded.

For oscillation, there has to be positive feedback with a loop gain greater than 1 someplace at some frequency. Look particularly at the bottom connections of L1 and C1, and the base of the transistor. I'm sure your schematic isn't right in one or both of those areas.

Also look for a connection from the output side of the transformer back to the input side, particularly to the base or maybe the emitter of the transistor.

Your schematic is now:

As I said last time, and you ignored in subsequent questions, I think you probably have something like this:

This is a classic push-pull configuration with low side drivers on each end of the primary and power applied to the center tap of the primary. The circuit arranges Q1 and Q2 to turn on alternately, which causes a net AC thru the primary.

The small feedback winding, arbitrarily between pins 4 and 5 in this example, is used to drive the bases of the transistors, and provides the feedback to make the whole thing oscillate. R1 provides the bootstrap current to get things going initially, and to supply some net bias current once things get going.

Consider everything off and the 12 V switched on. Both Q1 and Q2 start to conduct. However, there will be some inevitable imballance, so one of them will conduct a little more. Let's say Q1 is conducting a little more than Q2. That puts a net current thru the primary with the "dot" side being low voltage and the not-dot side high voltage. In the short term, the feedback winding will re-enforce this imballance. Note the orientation of the dots. The base of Q1 will be driven high relative to the base of Q2, so the feedback creates a sortof of "runaway" condition to amplify any imballance, which causes more imballance, which is amplified, etc.

However, the feedback is inherently AC coupled. Eventually the net current thru the primary reaches the maximum it can be, the current levels off, the magnetic field in the transformer therefore stops changing, and Q1 will stop being driven harder than Q2. As the magnetic field decreases, Q2 is actually driven harder than Q1. This actively drives the whole circuit to the opposite full-current point.

Some of the other parts I didn't put in this schematic help set the oscillation frequency to be a somewhat predictable value. This is most likely what the capacitor across the primary is doing, although at some cost in effeciency. Are you sure the capacitor isn't across the small feedback winding? Setting it up to be a little resonant makes some sense to get a predictable frequency, and to have that frequency be less depedent on load changes.

Due to the greater than unity positive feedback, but it being inherently limited to AC, the whole system will keep oscillating as long as sufficient power is provided. This oscillation causes large magnetic flux changes, which are picked up by the secondary (pins 19,20 in this example), to provide power to elsewhere. Since this is thru a transformer, there is considerable design range in the turns ratio from the secondary to the primary, and therefore in the output voltage relative to the input voltage. Both significantly higher and lower are possible.

I compared your PCB with Current-fed self-oscillating Royer inverter from document linked below. There are few differences: 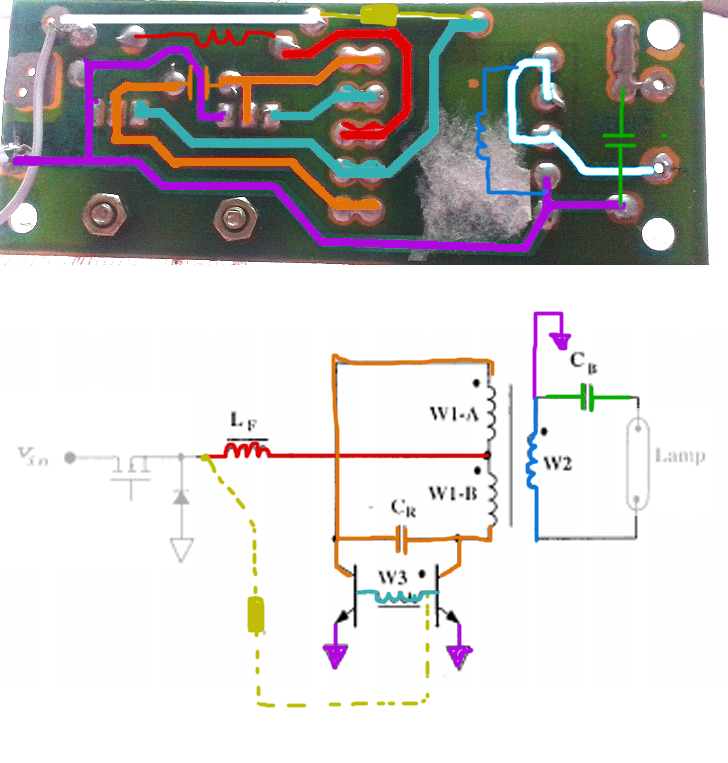 Sorry about that scan, but I see no point to rewrite it.

Here is source of schematic and scan:

Your schematic is still messed up, this answer is based on low component count and how transistors are connected on PCB.

It looks like some CCFL driver with topology based on Royer oscillator.

A Royer oscillator is an electronic oscillator circuit based on a relaxation oscillation, saturable-core transformer. It is used for DC to AC low frequency inverters. It was invented and patented in 1954 by George H. Royer. It has the advantages of simplicity, low component count, rectangle waveforms and easy transformer isolation.

And here is example of CCFL driver with current-fed self-oscilating Royer inverter topology: 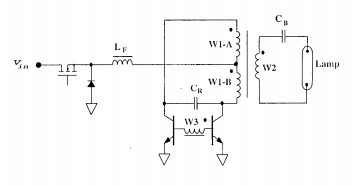 Not the answer you're looking for? Browse other questions tagged oscillation dc-ac or ask your own question.