What is the physical size of a logic gate?

I always hear about process size improvements in the news, but could never figure out how it translates into dimensions of a logic gate. I found a chapter from Weste's CMOS VLSI Design, that contains figures which looks like things I create when playing KOHCTPYKTOP. There's a figure of a 3-input NAND gate, but none for a simple 2-input NAND. So I used Inkscape to draw my own, based on Mead & Conway's design rules mentioned in the chapter: 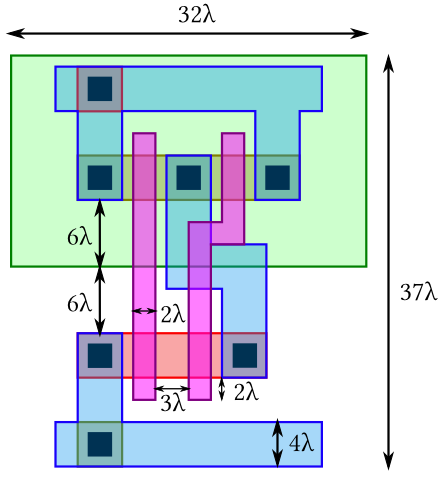 (I have no idea about the spacing around the well tap, I made it just 1 lambda)

So if I were to just plug in the current state of the art process size, which is supposedly 14 nm in 2014, can I say that the size of a NAND gate is about 448×518 nm²? Or is it possible to design it even smaller?

You can use that as a raw approximation. If you want to get better (or even get an idea of how much you are wrong), you better find someone who has access to a library or the design rules themselves and may speak about it (NDA are everywhere at that level).

Design rules for lower feature size are not a simple linear down scaling of the previous one. And new constraints are added which may make simple width and spacing adjustment just not enough. Mead & Conway is just a far too old source to even get an idea of the rules which apply for a state of the art process. For instance, I'd worry about the jog in poly, keeping strictly on routing direction was once for router convenience, and thus ignored in standard cell routing; nowadays, processes more or less mandate that as well, at least for some layers (and low level one such as diffusions and poly are the first to get the constraints).

Two remarks about your layout:

Not the answer you're looking for? Browse other questions tagged physical-design fabrication or ask your own question.

31
What is the most amazing PCB artwork you've ever seen?
2
What are the general steps used in creating a ASIC?
0
Physical push-down toggle button that pops up on voltage
0
Source synchronous vs Common clock methodology in Physical design
0
What is the measurement grid in the context of strain gauge?
4
What is the purpose of the gate runner on a semiconductor die?
4
Multiple Transistors (FinFET) sharing a gate?
2
Difference between Logic Chip and Memory Chip front-end manufacturing process?