I'm evaluating operating systems to use in an Internet of Things Project and I don't know what's the best way to proceed.

The system will run one (interactive) task that draws a dotmatrix screen and reacts to user input. It will store configuration and application data on spi flash. There will be a mesh of multiple modules (based on 802.15.4) to sync data between the modules, extract sensor data from the modules and forward them to a gateway (rpl comes to mind) and also distribute OtA firmware updates in a gossip-like fashion. All while running a rather memory hungry application as well.

So far I've looked into these systems:

My conclusion would be to take the good parts of Contiki (the netstack, file system) and port them to FreeRTOS. But I'm not entirely comfortable with a fork like that. I'd probably be adding errors and wouldn't be able to backport upstream fixes, also I still have to invent my own hardware abstraction to be able to switch the MCU in the future. So I'd end up with my own OS for something that seems like a problem that many other people should have too - hasn't someone done that before? (I mean I did find something, but the idea of running the entire contiki-os as a FreeRTOS task makes me uncomfortable)

Is there something I'm missing? Maybe the pain would be worth it and I should try to get Contiki to a functional state on my hardware instead? Or is there another system I've missed that would solve my problems?

Also I'm not sure whether I need 6lowPan at all, but when that means being able to build onto existing protocols/being compatible with other systems (e.g. Linux), I'd be willing to take the additional overhead.

If you are not married to that specific processor (or are savvy enough to copy/paste the code out anyway), I frequently use Freescale MCUs with CodeWarrior and Processor Expert. PEX includes a number of components including FreeRTOS, MQX, FAT, etc. Additional components can be downloaded and, in the end, it is just a GUI-based code-generator so, as suggested, you could copy/paste the resulting C code into your project. 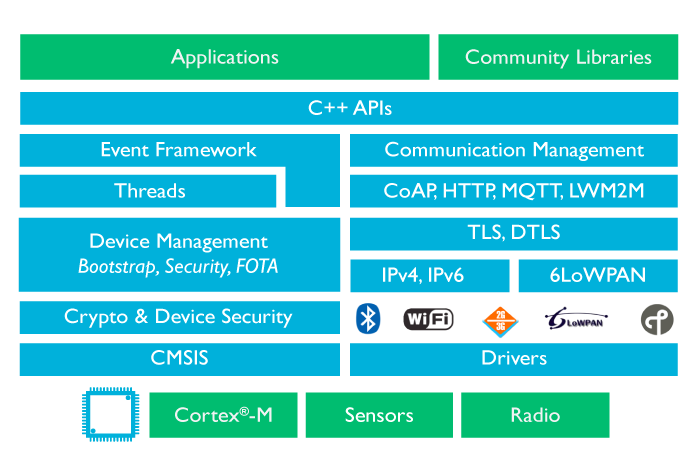 If this is for commercial use, I highly suggest you look at the non-free options, support is everything, if it's a personal project then i can understand.

Yes, there is cost involved, but with some RTOS developers, it not that big at all, they really make there money on custom development and licenses can be free until you make a sale. Below is a link to an article that compares some paid competitors:

I'm a project manager, and we switched from using ST offered drivers to Unison. IIRC, the licensing was surprisingly small, and we got a "full-trial" until we were convinced, but consistent direct support was what pushed us over the edge, and what really help up speed up our development. I think they already have support for various TI wireless chips, not sure about CC2520.

The guy that does most of the selling is really personal-able and doesn't list pricing for two reason, i'm told 1) because they want to hear what you need, they really want return customers, and word of mouth references, and 2) competition.

Not the answer you're looking for? Browse other questions tagged cortex-m rtos freertos contiki-os or ask your own question.