Does a Connector With Multiple GND Pins Make a GND Loop?

There are some cable standards that have multiple GND pins on the connector proper. A good example of this is the SATA connector (it has 3 of them). 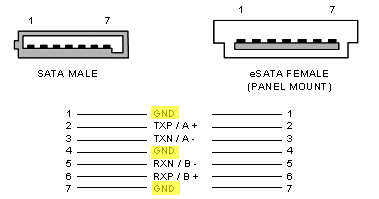 Wouldn't these mismatched impedances form a GND loop? Wouldn't it be better to have a single GND pin (of larger gauge if more current is needed)?

And if it is a GND loop, why are cables wired this way?

In practice the impedance difference isn't enough to cause a problem. Multiple smaller diameter conductors improve the impedance over a single larger conductor because of skin effect. Also, the ground conductors can serve a a shield between other conductors that may be carrying fast signals and could otherwise couple capacitively into an adjacent signal conductor.

In addition to the capacitive coupling mentioned by John D, there's inductive coupling at the higher edge rates. Ideally each signal line will have a return that runs right next to it; then the mutual inductance makes it such that the return current flows in that one ground wire, not the others. The signal line and its ground return are basically in the same place, with equal and opposite currents cancelling each other out so they don't radiate or accept interference. Even if it's a connector for a card and not a cable, and if you can't have a ground pin for every signal pin, you still want to distribute the ground pins evenly so any given signal pin's distance to a ground return pin is as close as possible. The matter of mutual inductance is similar in a ground plane in a PC board. Ground fills with one or more interruptions don't qualify. There must be a continuous, uninterrupted ground plane under the trace. The return current does not take the shortest possible path; but instead, because of mutual inductance, the return current travels directly underneath the trace, taking the shape of the trace, as that's what's easiest for it. This also produces the least interference, and accepts the least.

The kinds of ground loops which pose problems are generally those in which the effective area of the loop is large enough to capture stray fields, and where either the currents induced in the loop as a whole can in turn induce current in wires which run parallel for part of it, or where such currents create an unwanted potential difference between different points on the loop. Neither of those conditions would seem to apply here.

The magnetic field created by any induced current would oppose the magnetic field which induced that current. If some wires were only parallel to the ground wires for a portion of their length, it would be possible that magnetic fields in the portion where they aren't parallel might get coupled through toward the area where they are parallel, but with wires that run parallel for their whole length that's not an issue.

Not the answer you're looking for? Browse other questions tagged ground cables grounding groundloops cable-assemblies or ask your own question.

2
Cabling simple sensors 5-20 ft from a uC - tips and gotchas; UTP vs STP cables
11
ESD strike on exposed circuit ground pin
0
LVDS cable between a camera and a FPGA
1
Is it electrically safe to use an ATX PSU's PCI output for SATA/MOLEX instead of graphics cards?
0
Are these tiny connector pins standard?
0
Abusing EPS connector to power LED's?
9
The Pin 1 Problem in Audio, Star and Mesh Ground, and Contradictory Grouding Practices in Audio and Digital Systems
1
Eliminating an earth / ground loop in an A/V set-up
0
Ethernet RJ45 M-F cable (socket <-> plug)
6
How does the current of RS485 signals return from the receiver to the sender?