I am trying to design a replacement for a 2:1 switch using FETs, which would be really easy if I didn't have to concern myself with the body diodes that are present on PMOS transistors.

My scenario is that I have two batteries in parallel to power a circuit, they are both fed into a dual schottky diode and then that output is used to power most of the circuit, this dual schottky is good as it prevents a major issue arising if one of the batteries were to short circuit - the other would drain through it and die quickly. However, unfortunately the voltage drop over the schottky is too high (even though it is a mere 0.25V) and would not be able to power a specific part of the circuit that I need, and it would stop functioning much earlier than if powered direct from the batteries.

I need to switch between the two batteries to power this part in order to keep their voltages relatively even. Originally I was using a TS5A3154 multiplexer to do this, however I ran into issues when I realised that the analogue inputs would be higher than the supply voltage for the chip (the enable pin became redundant and the output would always be high [whatever was at NC / NO]). So I want to replace this with FETs as mentioned (PMOS or whatever will work / be cheapest) and need to avoid the possibility of one of the batteries shorting allowing the other to drain through the body diode that is present on PMOS transistors. The reason I am struggling is because any solution can't have a voltage drop over it as this would eliminate the point of the switch in the first place.

The FETs (switch) is / will be controlled by a microprocessor which only has an output voltage of +2V, while the battery voltages will be up to 3V at the beginning of life and then will be considered dead at about ~2.5V as some of the circuit won't work and they are crucial for the functionality of the circuit. The premise of this being that a 2V pulse from the microcontroller will switch off / on one of the batteries and then switch on / off the other one accordingly.

Just to reiterate, the question is to prevent the body diode of a PMOS conducting given events mentioned above without causing a voltage drop when they are functioning.

Cost is quite a big thing with it needing to be as cheap as possible, I have searched for alternative switches to replace the current one but all datasheets seem to say the same sort of thing regarding analogue inputs being higher than the voltage supply.

I would draw a circuit to go with this question, however, I do not feel it would actually provide anything as all it would be is two batteries each going into a PMOS and then have the two outputs connected to each other going to some load. If you want one I will oblige but as I say, it will only give a small visual aid rather than any technical input.

Edit
Just to add a little bit more information regarding this question:

So firstly thanks to everyone who has given an answer already, I have looked into each of them but for one reason or another they aren't suitable for my application - largely cost, current draw, operating voltage, etc...
So to give you an update on my situation, I think the most likely way forward will be to use two TS5A3154 switches and have each battery power one each and also be connected to one of the analogue inputs on the switches and then somehow switch between the two using a micro controller (EFM32G222F128).
The new issue I am having is that at least one of the outputs from the micro controller will have to be always high, however I need my MCU to go into a low energy mode (EM2) but I don't know if it is possible to be able to do this while having an output high, so if anyone has any knowledge on this chip and coding it in C, that would be amazingly helpful!

Reference manual for coding the Gecko

For people who have already answered - I will still award the bounty if no answer for this addition is given so fear not!
Godspeed.

There are IC's which can provide this functionality.

One option would be to use a "Power Multiplexor". An example is the TPS2115. It takes the place of the diodes and switches, and is controlled by a 2V-compatible logic signal. Its internal resistance is 110 milli-Ohm (or less), which give a voltage drop of 0.6 mV (!) at 5mA of current. You can find them for around $0.85 in quantities of 1000+. 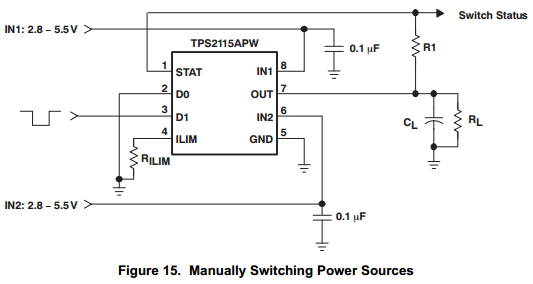 There are two possible problems with this chip: it only operates down to 2.8V (not 2.5), and it has a 55uA quiescent current. I don't know how important these are for your design. 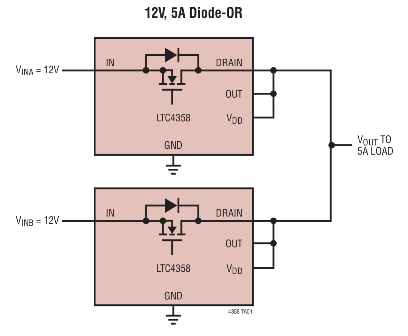 In response to your microcontroller question:

This specific microcontroller is complex and powerful. If you are only using it for the battery management, you might consider using a more basic one.

If you are happy with the dual diode arrangement and the only issue is voltage drop, I think you can get by with one PMOS on each battery. You need to have the body diode forward biased during discharge. Essentially, you are putting the FET in "backwards." When the FET is on, the drop will be very low. I drew up the idea below. This is a quirky circuit in the sense that if one battery has much higher voltage, then it may discharge, even if the other battery is the one that is enabled by logic. If you don't want this quirk, the problem can be easily fixed by using two PMOS per battery. Break the circuit between battery and "backwards" PMOS. Then insert the second one with source connected to battery, drain to drain and gate to gate of the "backwards" PMOS. I can draw it if you don't know what I am talking about. Just let me know. I have to warn you, though that that circuit has its own problems, because it is stable and happy with both FET's off. So it may need to be jump started somehow. Keep in mind that your current diode OR circuit automatically fails over to the good battery if one goes bad. If you have two FET's per battery, you lose that feature. There is no automatic failover, and if the currently selected battery goes bad, the rail goes down. 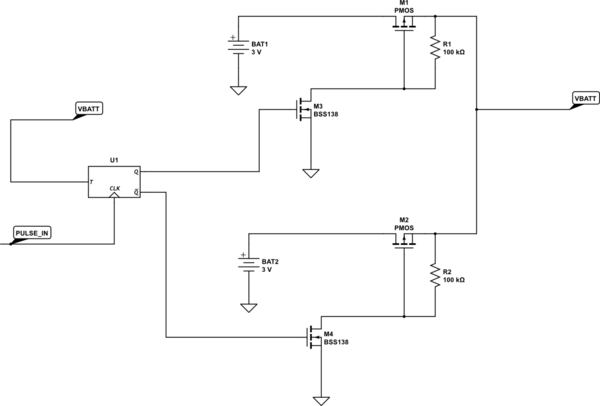 The solution is simple, just swap the Source and Drain so the FET works in the 3rd quadrant. Then you still have the diode steering, but with a FET in parallel that can be turned on to reduce voltage drop. And if you switch battery negative then you won't need level translators to drive the gates. 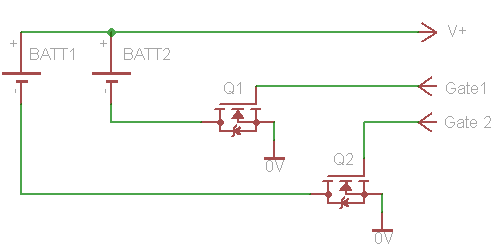 Cost is quite a big thing with it needing to be as cheap as possible,

Then just wire the batteries in parallel and don't worry about the tiny chance of one shorting out - or use a single larger battery!

K1 and K2 are single coil Form A (SPSTNO) latching relays, and the diodes on their coils are for spike suppression. 1N4148s or similar will be fine.

RL is the load, the BFC is used to maintain the voltage on the load while the relays switch batteries, and the circuit works like this:

With both relays open, a short pulse is sent to A1 while A2 is at 0V, closing K1's contacts and connecting BT1 to the load.

During the switching delay, the BFC will keep the voltage across the load from drooping out of spec and should negate the effects of contact bounce on the load.

In the configuration shown, it's possible that, inadvertently, both sets of relay contacts could be closed at once, connecting the batteries in parallel, which could be a Bad Thing. It's also possible, with a little extra hardware and/or some clever programming, to preclude such a possibility. 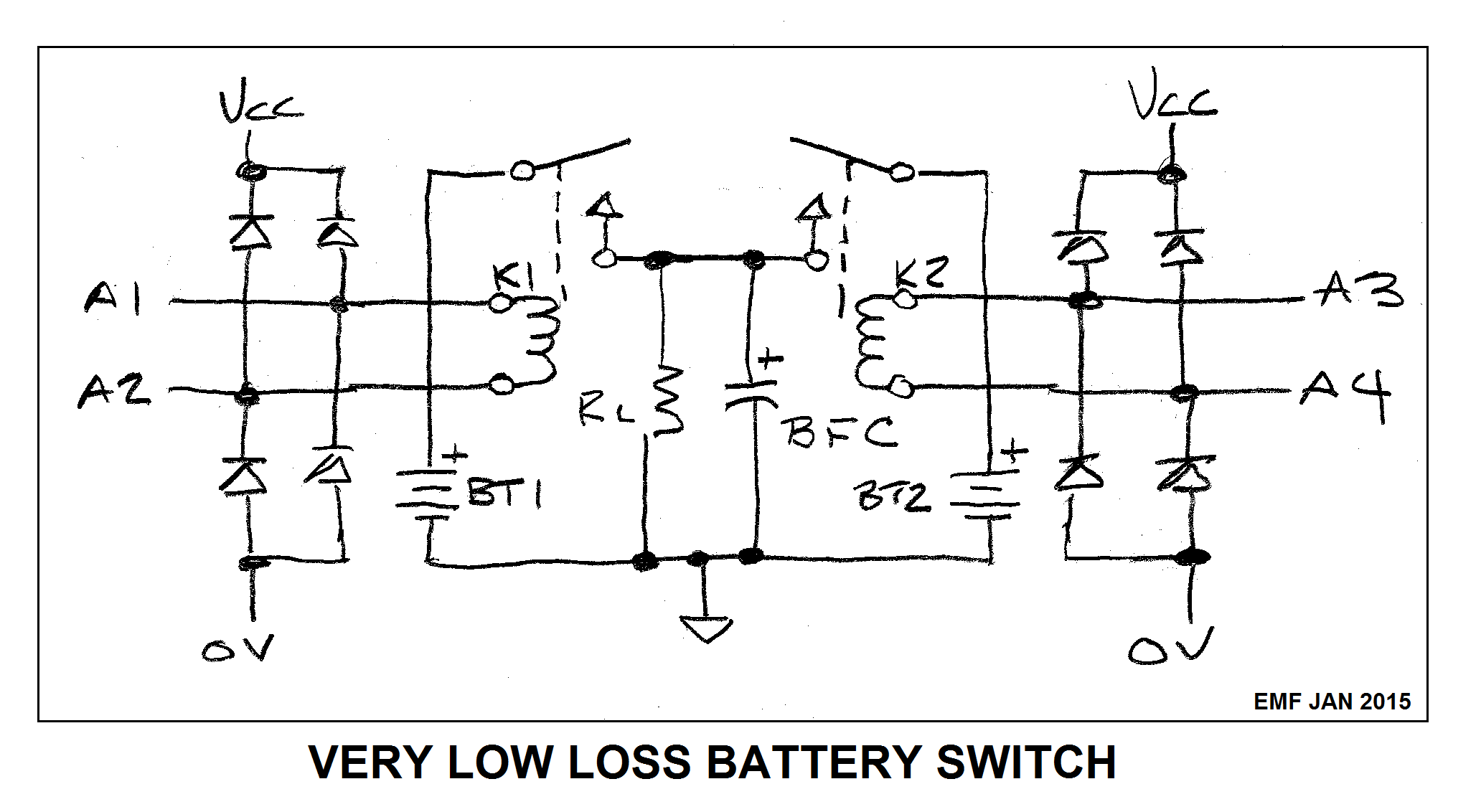 The main challenge of the question is to avoid the voltage drop when using current and with the same schematics make sure you never have reverse current in the batteries.

One simple solution is to use two LDOs (low dropout regulator), one per battery. It has several advantages: 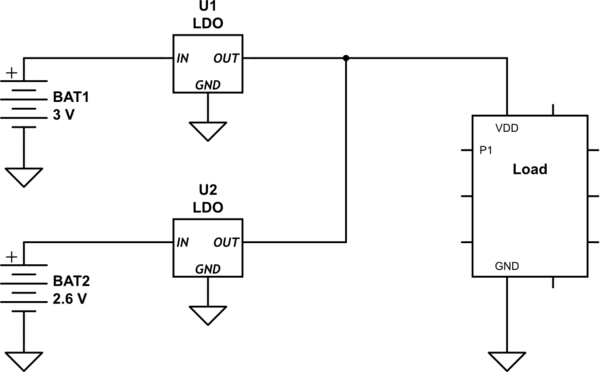 Not the answer you're looking for? Browse other questions tagged microcontroller switches diodes pmos body-diode or ask your own question.