How do I interpret this thermal curve graph for my heatsink?

The heatsink says it's thermal resistance is 24K/W.

Let's say my device dissipates 5 Watts. Assume a perfect conduction from the case to the heatsink, and junction to case is 0K/W.

If I use the specified value, the heatsink should rise 120K above ambient. However, from the graph it says it will be about 96K above ambient (unsure which curve is correct).

Further, how do I interpret the effect of forced air cooling according to the graph? 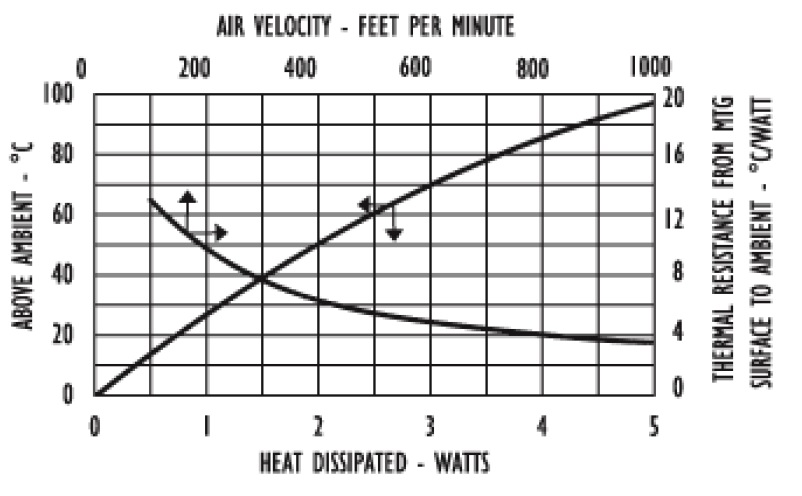 The specified value of 24K/W assumes that the performance is linear. That chart is obviously anything but linear.

Forced air changes this "base" 24K/W to the amount given on the chart. So if there was a flow of 400fpm the thermal resistance would drop to about 6.3K/W.

The spec sheet tells us that the 24K/W figure is using natural convection at 75 degrees C above ambient.

Looking now at the rising line on the graph, the arrows indicate that it graphs temperature against power. Drawing a vertical line at 1 Watt, we read a temperature rise of 28C, indicating a thermal resistance of 28. This is much larger than any value on the Air Velocity curve: it is close to the quoted value for natural convection. It is not 24, because the line is a curve: 24 is only specified for one point on a curve, the 75 degree above ambient point.

Drawing a horizontal line at 75C, we read approximately 3.25W, indicating a thermal resistance around 21.

This indicates that (a) The graph is wrong: it should go through (75C, 3.125W), or (b) 24K/W was wrong, and the graph is correct, or (c) The power/temperature line is drawn for different conditions than the quoted 24K/W figure: different ambient, different mounting, different air flow etc.

6
Thermal calculation for a D2PAK with a SMT Heatsink
2
Heatsink or IC: how to determine root cause of overtemp?
0
Case to heatsink thermal resistance with multiple MOSFETs
0
Thermal design for an IGBT
1
Three phase rectifier heatsink
0
How do I determine the junction-to-ambient thermal resistance?
0
Thermal Resistance, PCB Operating Temperature and PCB Self Heating
3
Is 23.8°C/W junction-to-ambient thermal resistance for a TO-220 in this datasheet with or without a heatsink?
0
Mosfet Thermal Resistance calculation
0
LM2596 Heat Sink