I recently switched from Mentor Graphics Expedition to Altium 14. I really like a lot of Altiums features but efficient routing still eludes me.

In mentor my typical workflow was:

The issue I'm having is that Mentor would automatically shift traces (while keeping the same general shape) when I dragged a component that was already routed. As a result, I could move something without needed to fix the traces (for the most part). In altium if I want to nudge a component even a few millimeters I need to rip up the traces and reroute them so that they don't end up crossing over and shorting or having little nubs left over in the process of moving a part.

Is there something I'm missing? Can such a feature be enabled in Altium, or is there a better workflow I should be following?

I appreciate any suggestions, this is really killing my productivity with Altium.

When you select interactive routing and begin routing, press TAB. This will open up the following dialog box. 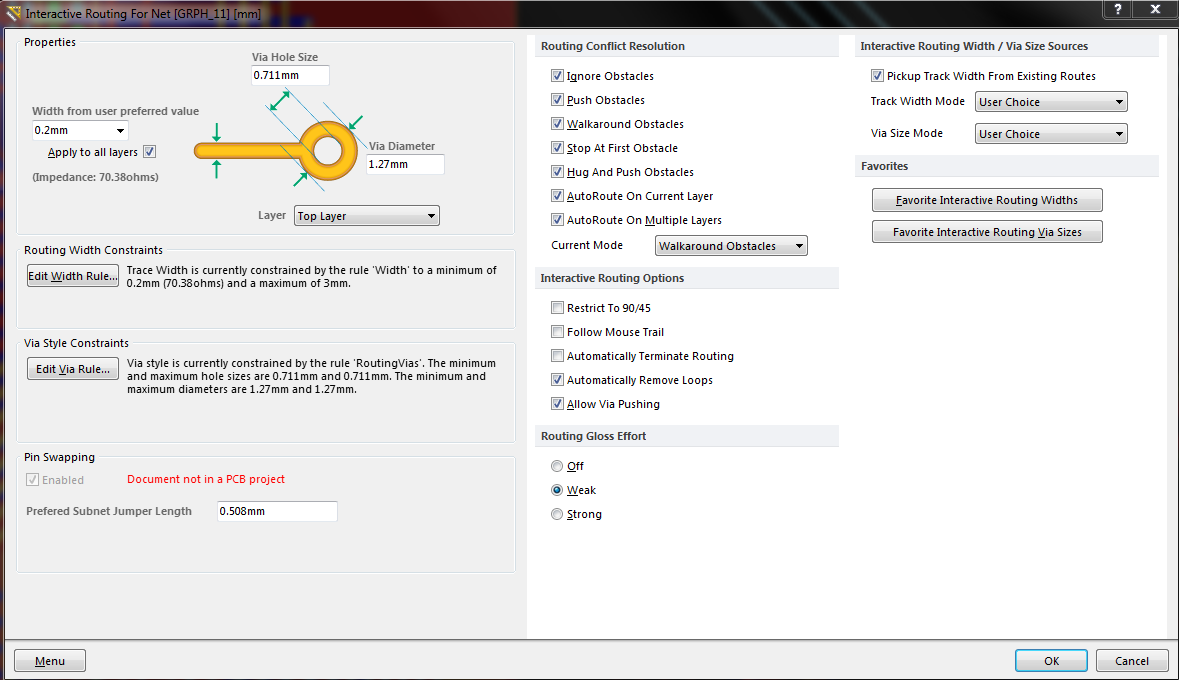 You'll see Current Mode (under Routing Conflict Resolution). Change that another option such as Push Obstacle. If a track is in your way, it will move the tracks out of the way (so long as it meets your DRC rules).

If you want to manually move a track, you can click and hold, and just move your mouse.

You have not clearly stated it, but seem to know that you can drag a component with traces using any angle connections using
"Edit" > "Move" > "Drag" (shortcut m,d)

You need to have set your preference settings in
"DXP" >
"Preferences" >
"PCB Editor" >
"General tab" >
"Other" section:  "Comp Drag"   to   "Connected Tracks"
for this to work and the traces need to end exactly on the centers of the component's pads.

However, you may find the result rather disappointing in most cases, as the traces are dragged in a rubber band fashion, using any angle routing for the last segment. This might be acceptable if you move a component horizontally or vertically (relative to its orientation), but gives unacceptable results for complex movement.

You can also fist select the component and adjacent traces and then move the entire selection with Edit > Move > Selection (m,s).
The results are often better than moving or dragging the component only, because that way you can keep pad entries and bypass capacitors with their tracks and vias in place.
You still need to clean up the routing around that area, but this is often less and easier work to do than re-routing the inner perimeter around a component.

As has been stated before, there seems to be no feature that does exactly what you desire.
If you would like to see such a feature in future versions of Altium Designer, you might want to vote for the corresponding feature request #1048 "Enabling to push tracks when dragging a component in the PCB" on the Altium website.

Not the answer you're looking for? Browse other questions tagged pcb altium routing or ask your own question.