I am new here to StackExchange and new to electronics in general. As my second electronics project (the first being a blinker circuit for a bandolier of LEDs) I am building a regulated linear power supply.

The specifications for my power supply are mostly dictated by the components I have available and are within my budget and skill level. Ideally I would like a variable dual output with the ability to supply negative voltage for use with opamps and audio amplification, which is where I am in need of assistance.

So the transformer I'm using is rated for 12VAC at 2A. It is not a center tap transformer.

What would be the easiest way to get a negative rail? I've seen people connecting two positive outputs together in series in a common ground configuration to obtain negative voltage, so would this work given my schematic? I also have another transformer that can supply 12VAC at 500mA, would it be worthwhile use that alongside the other transformer to provide a negative rail? Would I need a negative voltage regulator for it? I'm under the assumption that having dual half wave rectifiers isn't generally feasible for non center tapped transformer.

Below is my draft schematic (untested) for the supply I would like to build given that I can just hook up the two outputs in series and get a negative rail. I'm just unsure if the setup I have is adequate for it. 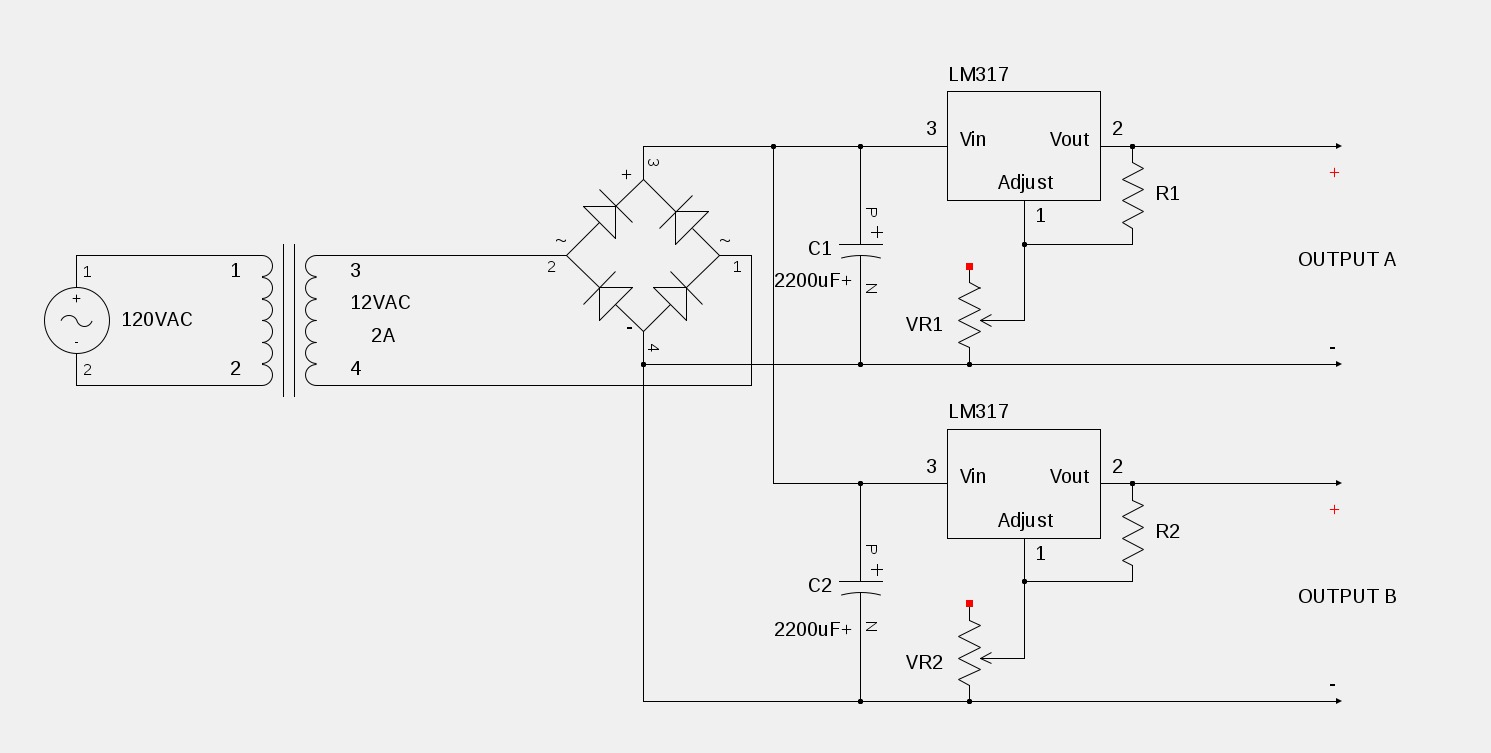 I have no idea if the dual output setup I have here will work, I don't see why it wouldn't though. I have no idea what I am doing really so I am probably wrong.

Any general advice would be great as well, thank you.

No, this won't work to give you +/- supplies, because of the common negative rail.

You can, however, use the transformer you have to give you +/- adjustable supplies by using two half-wave rectifiers (2 diodes), double up on the capacitor values to keep the ripple at ~2Vp-p, and an LM317 for the positive and an LM337 for the negative supplies. With suitable (large) heat sinks capable of dissipating about 10W each it should be good for about +/-0.6A. You could also use 10,000uF caps (say 25V rated) to get a bit more voltage range at high current. 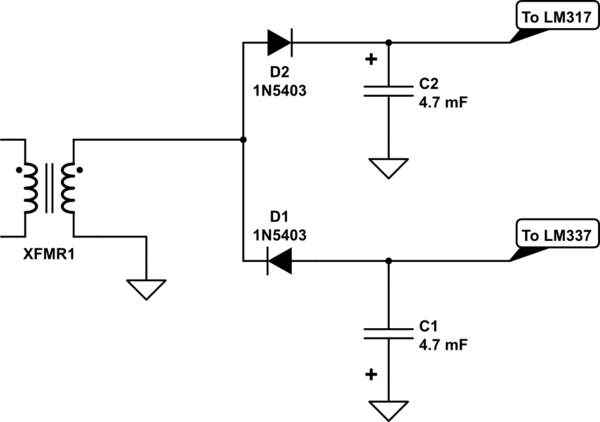 It is just a trick, but you can make bipolar power supply with this transformer using half wave rectifier from one tap and the other as common. I used to power small opamp.

In this case the ripple is double so the capacitor should be double as well, and most important both sides should be equally loaded, otherwise transformer becomes hot. Keep the symmetry within 50mA.

Look at your text book how to calculate Vout and required capacitor etc in half wave rectifiers, as well as the available voltage at the output.

Once again this is a trick.

You can't connect those two outputs in series, as they share a common negative terminal.

Use your other transformer to make a separate power supply, with no connection to this one, then you can connect those supplies in series to make a +/- supply.

Not the answer you're looking for? Browse other questions tagged power-supply power transformer linear lm317 or ask your own question.