How should I current limit a LED matrix?

I have an LED matrix which has a maximum peak forward current of 90mA and average forward current of 13mA per LED (dot). If I power only one LED at a time, this one LED will have a very large current consumption compared to if I power several at once. What values should I choose and where should I put them when I have VCC at 3V on each anode?

Added a simple schematic for clarity. 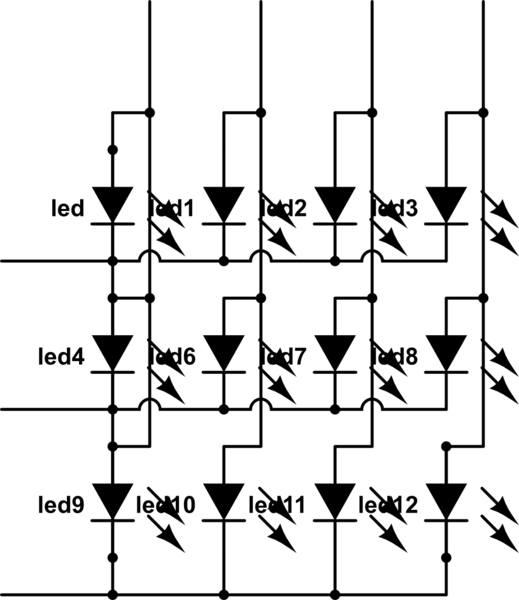 A great way to solve this is to cheat like crazy.

A constant current driver or sink IC will make certain that each LED only gets exactly as much current as it needs. TI's TLC59284 (16-channel sink) or TLC5916 (8-channel sink) will work for basic needs. Take a look at the rest of their Signage/Linear products if you want features such as per-channel current tweaking or PWM dimming (up to 12 bit resolution!). And most of them will work all the way down to 3V supply.

And of course, other vendors will have their own selection of drivers, so take a look around.

Having specified that you will have Vcc on the anodes makes your life simple: all current control must be on the cathode leads. Period. There's no place else. Furthermore, if you use a simple current limiting resistor, you must size it to produce less than 13 mA current in a single LED, since you can't guarantee that more than one LED per row will be lit over a long period, and 13 mA is an absolute maximum.

Operating from 3 volts is probably not a great idea, since LED variations start to bite you, but we'll go with it. Then, using the average forward voltage of 2 volts and a current of 10 mA (to give a little safety margin for LEDs with a lower voltage), and assuming your cathode driver output is 0.1 volt at 10 mA, you'll want a (3 - 2 - 0.1 / .01) or 90 ohm resistor.

And that's about as good as you'll get for a simple driver.

I hope that's not from your schematic capture program- there are obvious shorts in that matrix.

If you drive an m x n (row x column) matrix with equal time for each row (or column in the second case) then you'll have any LED that is 'on' energized for 1/m of the time (or 1/n in the second case). So if you want the LED to see 5mA average, it will have to have a resistor that is (Vdriver -Vf)/(m * 0.005) (or n * .. in the second case), where Vdriver is the voltage difference between the column and row drivers. 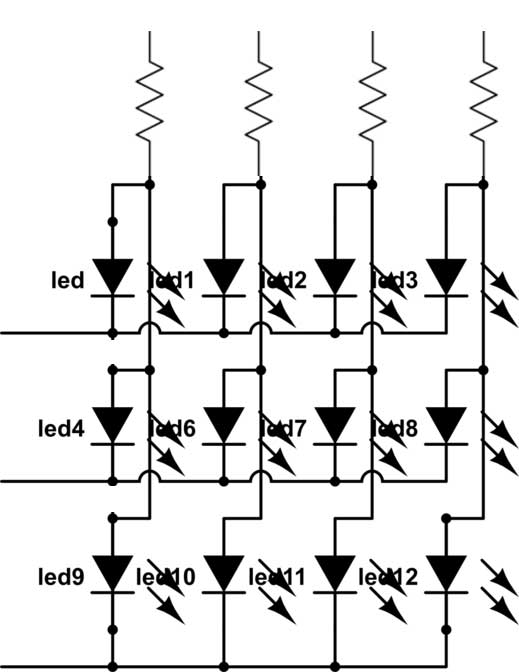 Here's an example of a complete driver circuit driving one row at a time and using one resistor per column. 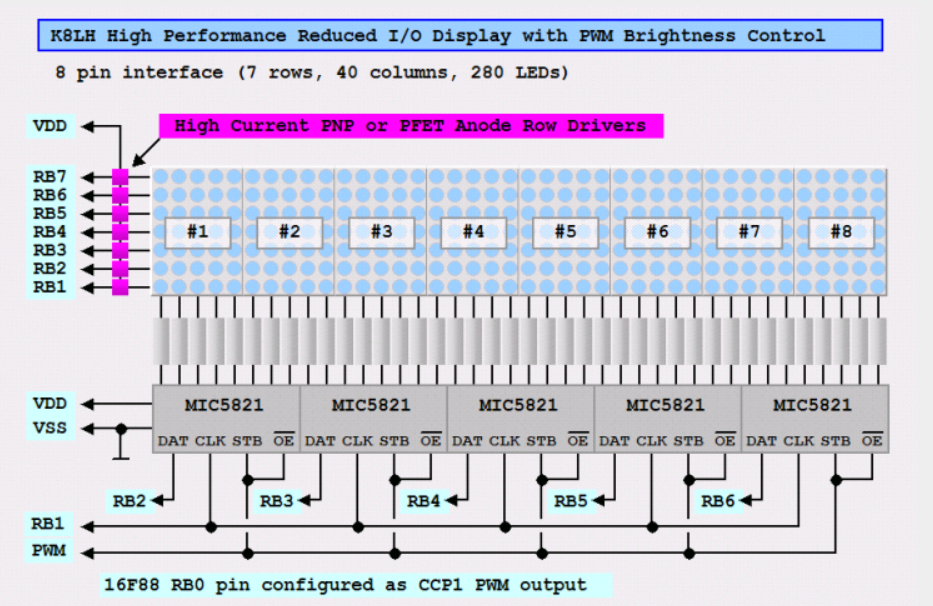 It may seem undesirable to use one resistor per column (40 in this case) but there is really no alternative. In your case both the high side and low side drivers must be low drop- the Micrel parts would be suitable, and you could use P-channel MOSFETs for the high side drivers. Your LED part is similar to the one used in this project (high side drivers used for rows).

Not the answer you're looking for? Browse other questions tagged current-limiting led-matrix or ask your own question.