Schematic for run of the mill SRAM?

So lets take your run of the mill SRAM, such as 23K256 from Microchip: http://ww1.microchip.com/downloads/en/DeviceDoc/22100D.pdf

Do they mostly just use a generic 6T cell setup such as: http://www.iis.ee.ethz.ch/~kgf/aries/FIG/fig5.4.gif

If not what do they typically use?

Also im not sure I completely understand the 6T cell setup, Like I get the general structure, and how it stores it using an inverter.....but which line are we reading from? The Bitline or NOTBitline?

Or is it we write to wordline to active the Cells, Send voltage to BIT/NOTBIT to over-write the new value. How do we write a value of 0?

And to read we just activate wordline, but don't send voltage to BIT/NOTBIT

is that correct or wayy off?

Also a side question: In the initial state, the inverters have no value....on either, so what would the value be when voltage is first applied? Since they are both technically sending out a 0? (sorry if that's a confusing question, it's hard to word it). I face the same thing with D-Flip Flops.....whats the initial value of them?

I believe almost all basic SRAM designed and manufactured now use this 6T design. Smaller design exists but they are usually more expensive.

To analyse this cell circuit let's redraw it a bit: 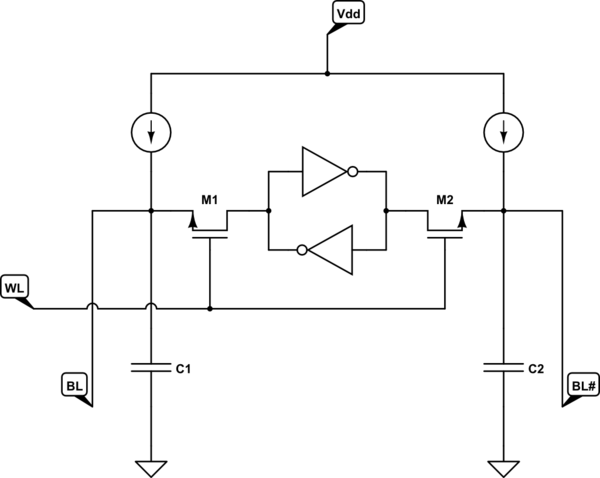 The bit is held in the two cross-coupled inverters formed by the four MOSFETs in the middle. Confusing looking, but this positive feedback loop latches, and this latching is what stores the bit.

The two MOSFETs on top are connected into constant current sources (or diodes, I cannot tell yet, but that does not really matter I believe.)

When the word line go high the two MOSFETs M1 and M2 turns on, allowing both detecting the voltage of the bit lines or forcing a voltage in changing the state of the latch.

When voltage is first applied to any kind of sequential logic circuit, the initial value depends on how the circuit came out of the fab. Each flop or RAM bit is different. To get the memories into a known state, there are two options. The first is a reset signal, which is used for flops. This isn't done for RAMs since it would make the circuit larger, and RAMs are all about density. Instead, you can either clear the RAM by writing to each address, or write your software so that no memory location is used before being written. (The latter is always a good idea, of course.) RAM clears may be done in software, but the hardware may also be able to do its own clear via a state machine. Obviously the hardware version will be faster.

Memory bits are usually pretty generic from a circuit design standpoint. The manufacturing process and physical layout is what ultimately determines capacity per dollar, speed, reliability, etc. The coupled inverters can be very weak, so it may be necessary to use sense amplifiers to measure their state quickly and correctly. These are basically differential amplifiers with a precharge/evaluate cycle similar to dynamic logic.

That's the extent of my personal knowledge from working in MCU development. This presentation from the University of Texas has some more information. It says that the complementary bitlines are both used at the same time. Probably this is both because it gets you differential reads for free, and because it makes overriding the feedback during a write faster.

In your schematic, I suspect that the two top PMOS transistors and the capacitors are there to represent the precharge circuitry and the capacitive loading of the bitlines, and would not be part of the actual bit cell layout.

1
Testing the integrity of SRAM
4
Reading and writing SRAM
1
VHDL SRAM Controller interface
0
Arduino Uno SRAM
1
How do the access transistors in an SRAM cell work?
1
Choosing SRAM for PIC project
4
Replacing Pseudo-SRAM with SRAM
0
how to draw the transistor level schematic a 3-port SRAM
1
SRAM Chip. Entering the data either manually through DIP Swithces or from the bus