Uses for gate expressions, Nor and Xor

I'm not generally confused by Electronic Engineering, but Nor and Xor are the Gate expressions that like to break that Rule. I can't find proper answers to this question, as they are either: Too Complex. Or too Uninformative.

No and Yes, I and O are quite simple, but i stumbled across the two extra expressions I've never heard of, Nor and Xor. I'm quite new to this kind of stuff, so Nor and Xor are also new, and quite confusing. Some clarification on the uses of Nor and Xor would be appreciated.

XOR emits 1 when the two inputs differ. You can consider this as binary addition without carry.

There is one special thing about the NOR gate. It (along with NAND) is what is called universal gates. That is, any other gate (AND, OR, NOT, etc.) can be implemented using just NOR gates. I think this picture shows why:

So, as far application is concerned this is the main thing. For Ex-OR, it is commonly used as a state toggle or a buffer. If you look at X-OR truth table:

You will see that if I set one input to zero it acts as a buffer. If my input is 0, then output is 0 and if my input is 1 the output is also 1 (buffer - output same as input).

Why are buffers used? In digital circuits it is primarily used to introduce some time delay. Toggling - well though NOT gate does the same, it is advantageous to use X-Or because by just changing the first input 1/0 (Toggle/Buffer) can be achieved.

NOR stands for "not OR", which you can think of as OR with the output inverted:

XOR stands for "exclusive OR". There are several ways to think of that. The name suggests OR, but not when both inputs are equal. You can also think of it as indicating difference in the two inputs. No matter how you think about it, XOR is:

They are types of logic gate:

NOR - Negated OR (Neither one nor the other) 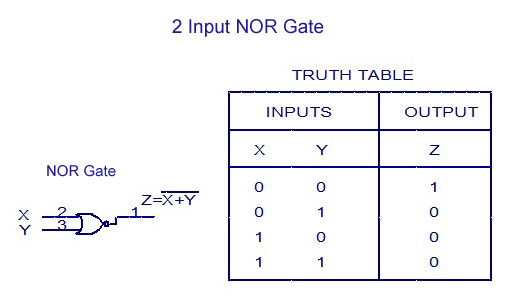 XOR - eXclusive OR (One or the other, but not both)

Not the answer you're looking for? Browse other questions tagged logic-gates or ask your own question.