I've attained most of the material I need to build my first power supply. The specs are mostly dictated by the parts I have. My intention is a dual isolated variable output power supply that I can connect in series to give negative voltages.

Below is the "final" draft of the circuit that I'll be implementing. I'll add in fancy pass transistors and capacitor discharge transistors and other things once I completely understand how they work.

I've set up a basic form of this with a single output and no decoupling capacitors or protection diodes on a breadboard and it worked well. 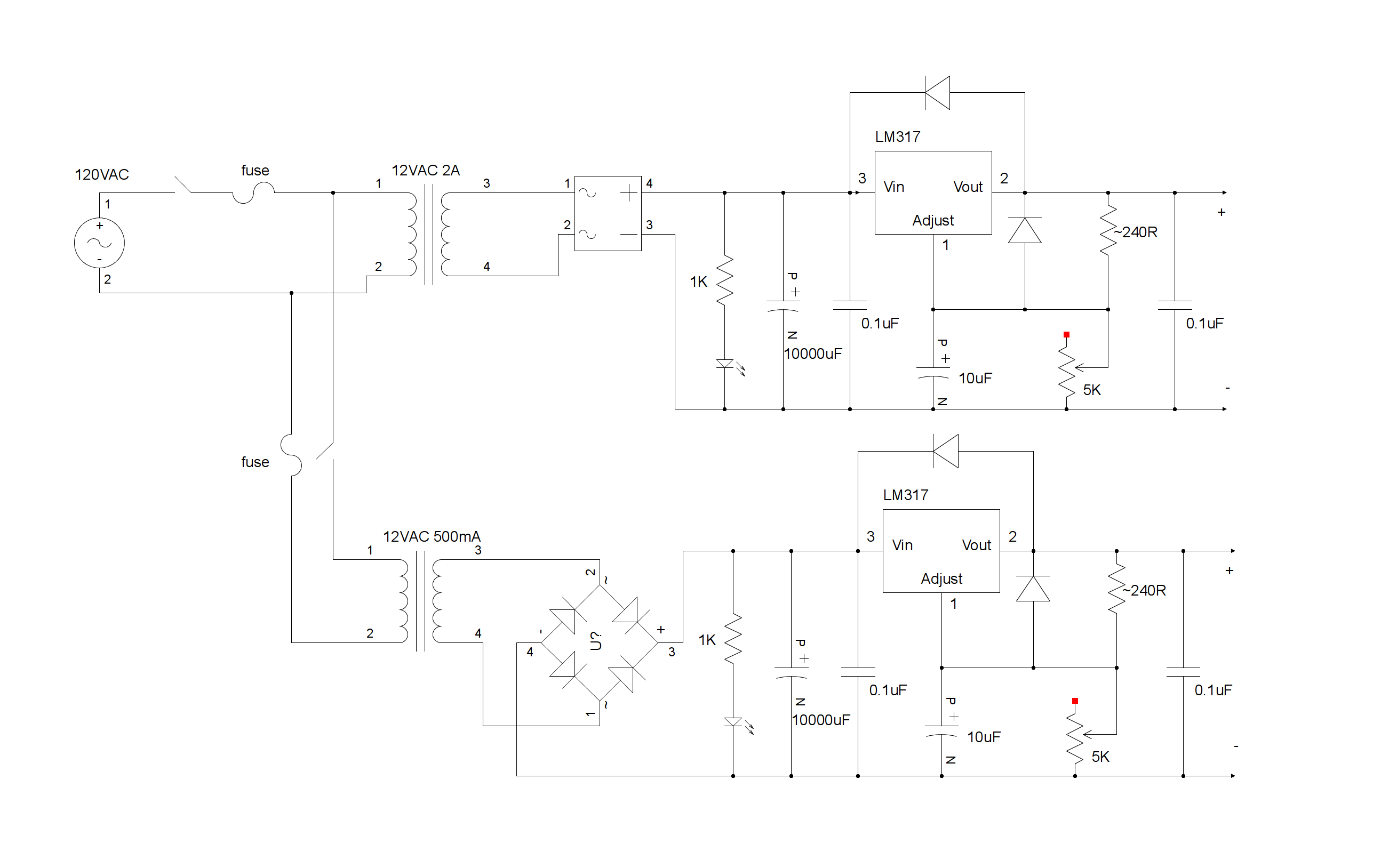 Clarification: I pulled a single bridge rectifier package out of an old TV which is why I have both a packaged bridge and a diode bridge on the schematic. Other than that and the transformers, the circuits are identical.

So here are some things I would like to ask:

Thanks for your assistance.

Resistor arrangement on LM317's does NOT adjust voltages as shown.
Refer to data sheet (carefully) - you need a variable resistor to local ground.

You can only use a second positive supply to form a negative one in the way that you are proposing if the "energy sources" are isolated relative to each other. eg two unconnected windings on the same transformer. The input of the "-ve" supply will be above ground voltage during operation.

To use a single transformer winding or non isolated sources what you want is to use an eg LM337 which is a less well known negative regulator equivalent to the LM317.
Here is a dual +ve & -ve supply circuit diagram using an LM317 and LM337. They use centre tapped transformer and a single bridge rectifier - but you could use the 2 separate windings as you propose and join them appropriately.

I'd like to solder the smaller 500mA transformer onto the lugs of the larger transformer, is this safe/do I need to care about polarity?

Slightly unclear what is intended. Mechanically not wise.
Electrically - use wires.

Is it fine if I stack the two transformers on top of each other?

If I had both outputs connected in series, would I be limited to 1A due to the second transformer only providing 500mA?

When done "properly" each supply can return its own Imax to ground. A current that starts at V+ and ends at V- will be limited by the smallest current capability.

I don't need that much current but I'm just curious if I'd run into trouble since the transformers are unbalanced. I have a 9V 15VA transformer as well, would that be better matched?

What amperage of fuse should I use? I'm worried about magic smoke....

LM317 is self protecting within limits.
1A fuse fast blow blows at about 2A in moderate time.

How damaging would a shorted/max current output be on this circuit?

Generally, it looks fine, but I as I said in a comment to your previous similar question, I suggest that you add reverse-biased rectifiers directly across each of the two outputs. That way if you connect them in series and a short or overload occurs the output cannot be driven too far negative by the supply with higher output capability (one will always 'win'). This is a general precaution that is useful whenever connecting supplies in series. 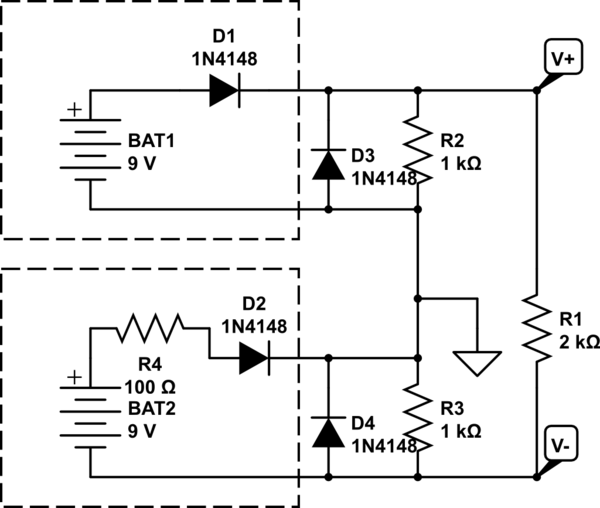 In the above schematic the - supply is 'weaker'. If the R1 is changed from 2K to 1 ohm you'll see the minus supply change polarity and become positive to almost the same voltage at the + supply if you don't put D4 in there. With D4 the reverse voltage is limited by the diode. You can run the simulations and play with the values.

The 9V battery plus diode represents a floating positive regulator that cannot sink current (as most cannot). D3 and D4 are my recommended diodes (but use a 1N4004 or 1N5404 rather than a 1N4148). R1, R2 and R3 are the load resistances.

Not the answer you're looking for? Browse other questions tagged voltage voltage-regulator transformer lm317 linear-regulator or ask your own question.