I am routing a PCB with an Ethernet connection and I am having a bit of trouble deciding on how best to route the TX and RX differential pairs. I have done the impedance calculations to figure out the track geometry needed for 100 ohm differential impedance and confirmed it with the board house. However, I have a bit of a length mismatch between the TX+/TX- and RX+/RX- pairs (about 5mm). Hence, I am employing the "squiggly line technique" to minimize the length mismatch of the traces in a pair.

My question is whether there is a rule of thumb or a precise calculation to figure out the squiggly line geometry? To illustrate what I mean, have a look at the attachment - I have routed one pair with "loose" squiggles (labelled 1. in the image) and another pair with "tight" squiggles (labelled 2, in the image). Which one is better and does it matter at all? My concern with the "tight squiggles" is degrading signal quality due to reflections as the squiggles are close to 90 degree angles which most app notes strongly advise against. The "loose squiggles" on the other hand take up more space and hence am I degrading my differential impedance?

Thanks and happy holidays! -Igor 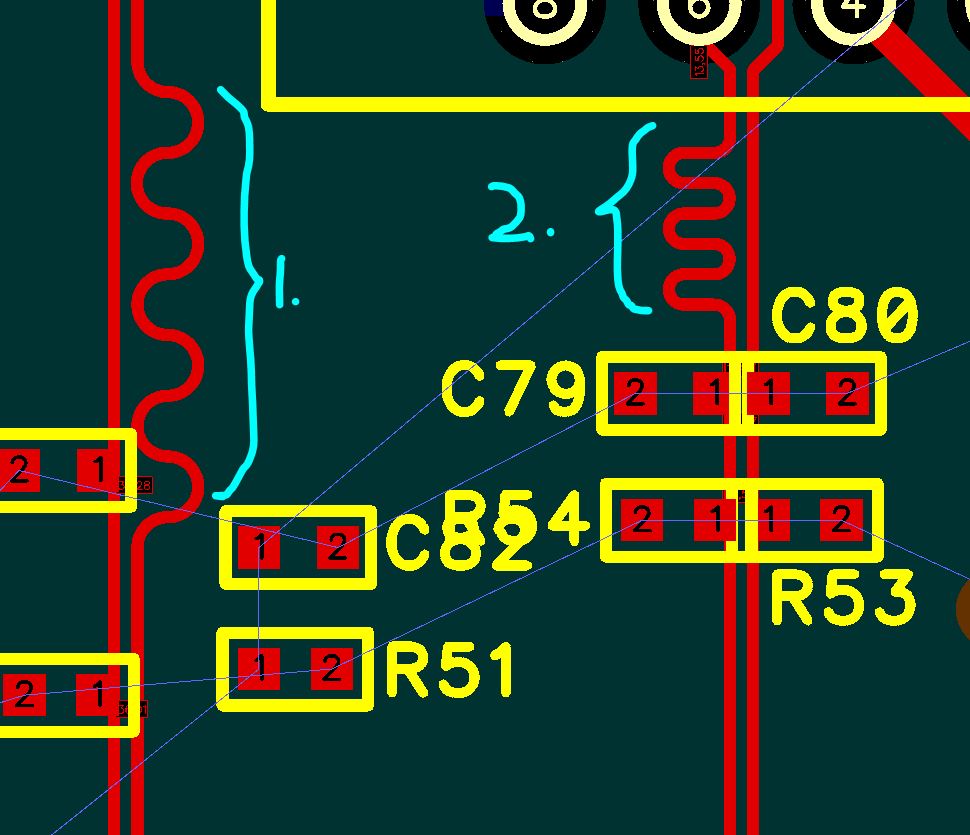 I'm not sure where you have read that the squiggle design is used for this purpose, i.e. path length matching. From what I can find the only place where a squiggle (like the one you've drawn) is intentionally used in RFID squiggle antennas; and you probably don't want to build one of those on your board!

Below is an example of path length matching from a book I've read (Jacob et al. Memory Systems). There are one or two squiggly looking paths there but only with one or two periods at the most. The pattern shown there seems to prefer a high amplitude of the "squiggle" so that it has a low number of periods/repetitions. Most other routes shown there are lengthened in some way but not by squiggles. The most common lengthening method used there seems to be making pentagonal U-turns (a term I just made up because I don't know an established one) so that an exterior polyline is naturally longer than an interior one. I don't know what software is used to generate those designs (but it's a good question).

After more searching, it seems that a trade term for the squiggles when applied to trace length matching is "serpentine traces".

And I found an article discussing those: A New Slant on Matched-Length Routing by Barry Olney... Well, the article is actually about proposing an alternative to serpentines, but it does have some background before it gets to comparison. It does seem to me however that the very long serpentines shown in that article are for demonstrative/contrast purposes. I've seen at least two dozen network card models up closely in my computing life (in 20+ years) and I cannot remember noticing a pronounced squiggle like yours (or the one in that article) on any of their PCBs... Now it may have existed in the inner layers (on the few boards that had more than two) where it was not visible. Some cards do route their differential signals on the inner layers, as microstrip.

With this serpentine terminology, it turned out they are standard textbook subject. Thierauf's Understanding Signal Integrity book has a couple of pages on this. Alternative terms are (according to that textbook): "meander or trombone traces". If I get this right, the number of periods is to be minimized because each contributes to a ladder-like waveform created by crosstalk between the U-turns, as excerpted below from the aforementioned textbook. This is alas a purely theoretical analysis. 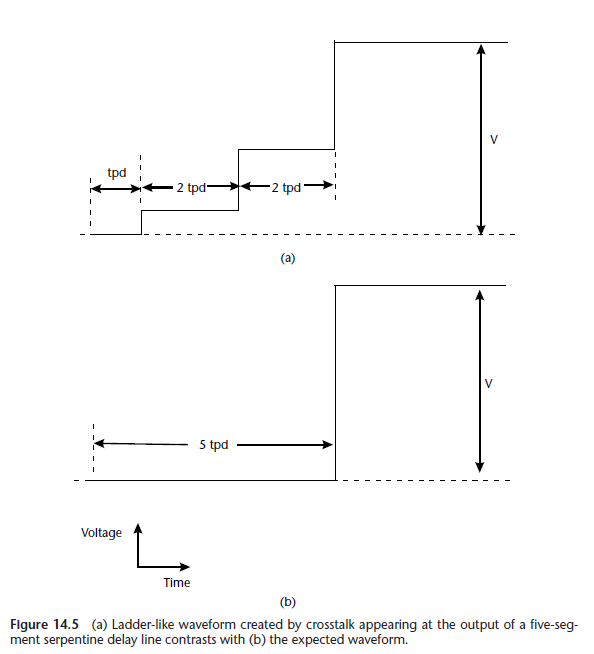 The book also says that this is only an approximative solution and that a "3D field solver" is needed to fully simulate the real behavior; for example, the signal actually propagates faster in a serpentine than the 2D trace length would indicate. I intuited correctly the recommendation the book was going to draw from that graph; quoting it below:

Because the maximum coupled voltage grows with the number of segments in the serpentine, when laying out a serpentine, it is best to use a fewer number of long segments instead of a greater number of short ones. Fewer segments also mean fewer corners and less uncertainty in the timing and impedance. For these reasons the segments should be long (typically greater than the signal rise time) and few in number. Also, because crosstalk increases as the traces are tightly packed together, laddering can be reduced by increasing the separation between segments.

Finally, the book also mentions placing a grounded guard trace between segments in a serpentine to (further) reduce laddering caused by crosstalk. The book also lists/cites a few more in-depth papers on this serpentine issue:

On a more practical note, NXP has an app note DisplayPort PCB layout guidelines (AN10798) that touches on several aspects of trace lenght mathcing on pp. 4-6. They recommend the serpentine design shown below, which also obeys other rules, like not allowing too much distance between differential pairs.

Your bigger concern with tight squiggles is that part of your signal can couple right through them and end up coming out the other side sooner than you think. Best to use larger like your first drawing.

Also keep the squiggles close to either your transmitter, receiver or connector. Perhaps less than 1/4 wavelength of the highest frequency content of interest away from your transmitter. Best to lump discontinuities together.

Not the answer you're looking for? Browse other questions tagged ethernet differential routing controlled-impedance serpentine-trace or ask your own question.