Is there a common name for this [voltage-boosting] circuit topology/idea?

In the OPA454 datasheet I found an interesting circuit idea that I'm not sure what is it usually called (if there is a common name for it). 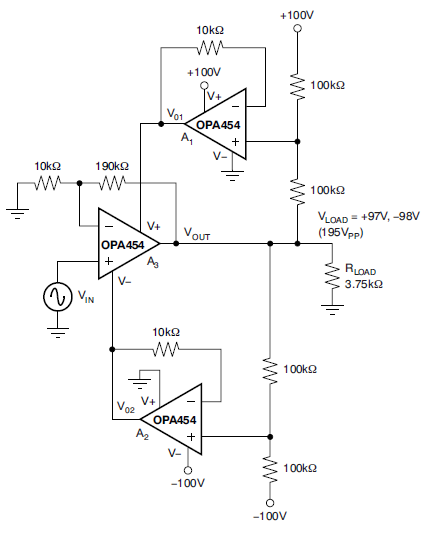 It involves using two opamps to shift the rails of a 3rd one. Note that unlike a bridged [tied load] configuration this circuit requires a doubling of the voltage supply rails. On the other hand, the load is not floating in this circuit, so you can combine ts idea with the bridge to get 4X the output voltage swing (relative to using a single opamp). I'm omitting the 6-opamp bridged picture here as rather obvious; you can find one in the aforementioned datasheet.

My question is just what's a/the common name (if any) for this circuit idea. If I were to coin a name, "dynamic rails", "dynamic operating point" or something like that seems reasonable to me. (But these names don't get any sensible results back via google search.)

EDIT: I also saw something similar, but cheaper, with two BJTs instead of opamps for the "rail shifters" (A1 and A2) in a 1999 EDN article titled "Bootstrapping your op amp yields wide voltage swings" written by [then] AD employees Grayson King and Tim Watkins. Using BJTs would introduce some more non-linearities, no doubt. So maybe "bootsrapping" might be the name for this technique... although Rod Eliott's page discussing the issues with this approach never calls it that, so I'm not convinced "bootstrapping" is the name for it... (EDIT3: Well, this was an incorrect reading of the purpose of that circuit; see comment below the question.)

EDIT2: In another article and in AD app note AN-232 (cited in that article), "supply bootstrapping" or "substrate bootstrapping" refers to something similar (altering the rail voltage via "feedback"), but in these articles it is done for a different purpose: a reduction of the input capacitance non-linearity for opamps with FET input stage... So, I'm guessing "bootstrapping" encompasses the idea I've asked about, but can generally mean the use of this supply-voltage-shifting technique for other purposes.

I've seen "bootstrapping" used in a few more books/articles for this technique:

So I guess that clinches "(rail/[power-]supply) bootstrapping" as a relatively common name for this, even though not every source utters it when discussing such circuits... And the purpose of the rail bootstrap may not always be a voltage swing increase.

If someone finds another (relatively common) term, please contribute another answer.

EDIT: As interesting titbids (found thanks to a rather vague mention on a forum), I found two UK patents on this idea:

Neither of these UK patents uses the term "bootstrap" though... as far as I can tell, anyway; old UK patents are not OCR'd, so search doesn't work in those PDFs.

There's also an output voltage boost circuit based on this idea in Linear appnote 67 in the article titled Extending Op Amp Supplies to Get More Output Voltage by Dale Eagar (starts on p. 58 in this long document). This one uses MOSFETs on the opamp rails. But it never uses the term "bootstrap". So yeah, "bootstrap" is a common enough term for this, but not universally used... The preferred term at Linear for this circuit idea is extended supply mode, which (if you google it) is found exclusively in their documents... so this alternative term appears to have less traction across the industry as whole.

IMO "bootstrapping" is not an appropriate term for this circuit configuration. "Bootstrapping" means "following"... or to insert a following (opposing) voltage source in series to the input voltage source and a resistor (this old circuit technique is based on one of the Miller theorem applications).

This idea resembles the variable power supplies with a switchable secondary winding.

Not the answer you're looking for? Browse other questions tagged operational-amplifier bootstrap or ask your own question.

1
Opamp: amplifying DC bias problem in output?
2
Is there any way to inhibit this latch circuit from locking up at startup?
3
A question about preventing reverse polarity for supply rails of an opamp
2
Why must this capacitor be a “low leakage” type?
0
Am I exceeding maximum ratings for the power rails of the opamp?
3
Protecting opamp inputs when powered down
3
Can an opamp have its own voltage regulator?
0
Does the CircuitLab simulation ignore OpAmp power rail current?