I was looking for a circuit to fade an LED on and off using no microcontrollers, and found this nice circuit:

it seems like exactly what I was looking for, so I went ahead and used it with a few changes:

I built the circuit as above (with the pinout changed accordingly for the 556), and it didn't work. I was a bit surprised, and double-checked all of the connections -- but they were all correct.

Would any of the changes altered how the circuit functions?

A simple analysis of the original circuit and the substitutions you made goes something like this.

The 555 circuit shown is a squarewave (1:1) oscillator. The frequency being determined by R1 and C1. The voltage at the junction between these two components changes between 2/3 rds and 1/3rd of the supply (set by input pins 6 and 2). For a 9V supply this will be 6V & 3V. Changing the supply to 12V gives 8V and 4V. The voltage varies in an approximately triangular waveform.

This voltage is connected to the the base of an NPN transistor, Q1 (in this case a BC478.) Just about any small signal NPN would do so a change to a 2N2222 type would have very little effect on the operation. The transistor is connected as an emitter follower so the voltage at the emitter would be 0.6V lower than its base voltage. For a 9V supply this voltage would be between 5.4 and 2.4V. For a 12V supply this would be between 7.4V and 3.4V.

The 556 is just a double 555 in one package so using one half of the chip should still work (provided you have the correct connections).

Your last substitution is where it all goes wrong - using a 12V LED (with built in resistors.)

Q1 is being used as an emitter follower, so the voltage on its emitter will be about 7.3 volts when U1-2 is at 8 volts, and about 3.3 volts when U1-2 is at 4 volts. there's also the voltage drop across R3 to contend with, but since we don't know the value of the ballast in your string - or the current through it - it's impossible to determine the effect of R3 on your string other than to note that it'll cause the string to be dimmer than if it (R3) wasn't there.

But, just for grins, if we assume that - when U1-2 goes high and Q1 emitter goes to 7.3 volts - your string draws 10mA when it's connected between R3 and ground, that means that R3 will drop:

If your string expects to see 12 volts on its input for full brightness, but it sees 2.7 volts instead, that should be a pretty good indication of why it's not working.

If you could measure the voltage on the diode end of R3, loaded and unloaded, that would be a great help in solving the mystery. :-)

According to the link you provided and to the results of a search for the somewhat elusive 3528's specs, your array looks like this: 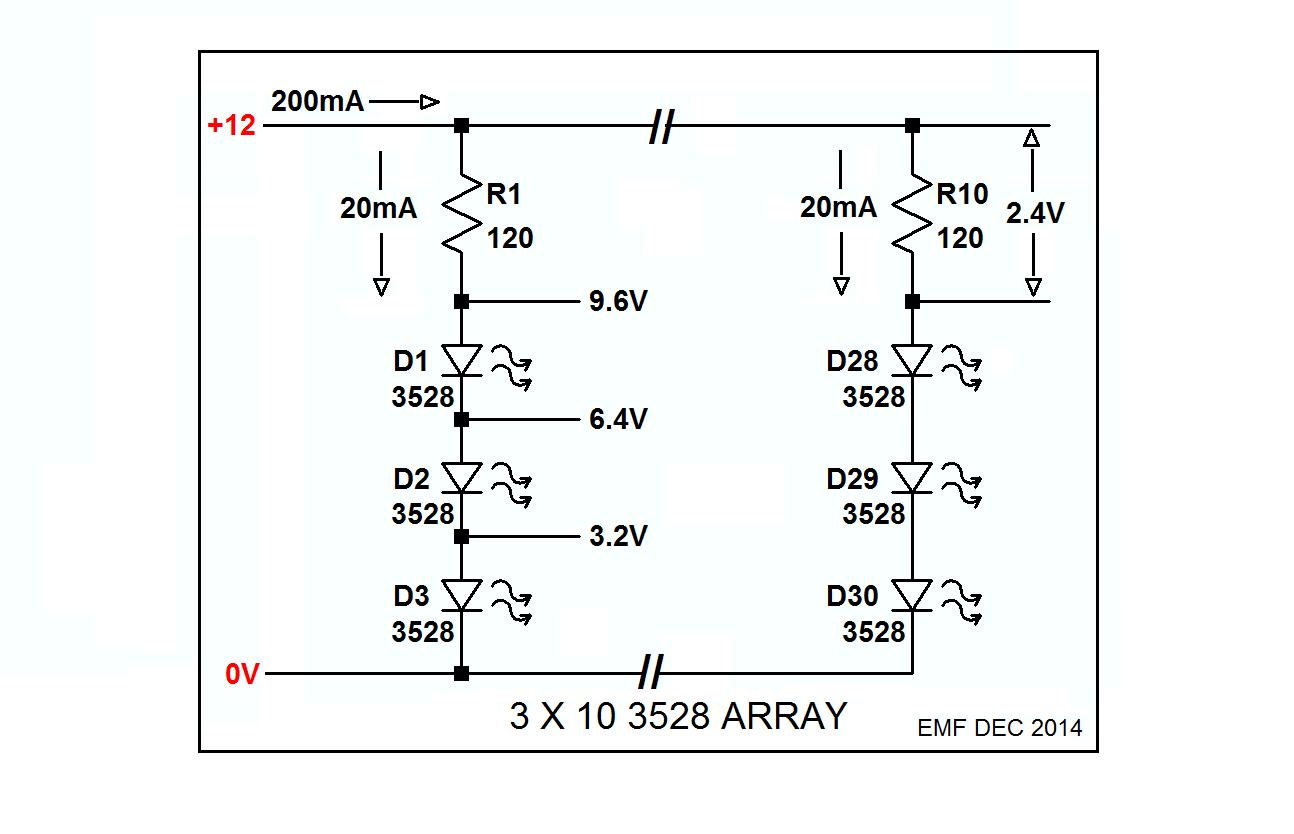 Note that the array comprises ten paralleled strings of a 120 ohm resistor and 3 LEDs wired in series.

So, the next step is to design a triangle-wave generator which can push 200 milliamperes through what looks like a 60 ohm load and then slowly(?) reduce that current until the LED dimness looks OK, then raise it again, slowly, to 200 milliamperes, and then repeat the cycle endlessly.

You do not say but, if these are white LEDs the 2.5V will be inadequate to make them more than glimmer faintly, at best.

IF you have access to the strip components you can test this by shorting out one of the three series LEDs in one module only (each strip is made up of many modules).

An LED strip will dim if you supply it with about 9V - 12V variable directly.

One method that may work in this case is

Starting with R3 is say 10 Ohms will show you if this works for you.

There are better circuits available.
If you explained what you had available and what you wanted to do in good detail, rather than what you think may do something semi-unknown that you want, then we can probably help you.

Not the answer you're looking for? Browse other questions tagged led 555 feedback or ask your own question.