What encoding is used in this signal?

I have a cheap wireless pool thermometer (AcuRite 617 1) and I'd like to intercept the temperature data at the receiver and use it with a computerized data-logging system.

Conveniently, inside the receiver is a small break-out board that is connected to the antenna and has digital "V", "G", "D", and "SH" pins: 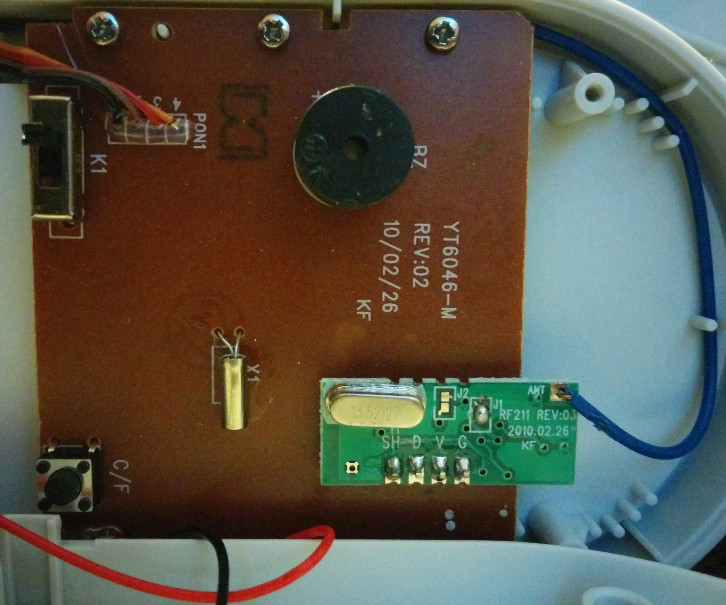 Here is a segment of captured data from the "D" pin during a transmission (these happen once per minute). Before this segment, there is what appears to be much-higher-rate data, but I believe that might be noise -- this is the beginning of the 1.36kHz / 680Hz data.

I've googled a bit and can't find an encoding that looks quite like this, but if I were to guess what's going on, here's what I'm thinking:

Am I looking at this correctly? Is there a name for this encoding?

Some further notes on the break-out board:

2016-02-14 Update: I've revisited this project and appear to be getting a clean 64-bit stream between a 4-cycle preamble and a 1-cycle "postamble", after which the display board shuts down the RF module by pulling ^SH low (top line):

According to Micrel's "33/66% PWM" scheme (which appears nowhere else on Google), that's

So now I have to start manipulating the temperature to decode the bits. Here ("x") are the bits that seem to change without any apparent change in the display:

I assume these are either least-significant bits or battery-level (which is only shown as "Low" when it drops significantly).

2016-02-15 Update: I'm taking the show on the road to give the new "Reverse Engineering" stackexchange a crack at determining meaning: https://reverseengineering.stackexchange.com/questions/12048/what-is-contained-in-this-transmission-rf-pool-temperature-sensor-base-unit-re

Micrel refers to it as a 33/66% PWM scheme. It appears to be a fairly simple, but ad-hoc protocol.

PWM stands for pulse-width modulation. There is a Wikipedia page that goes into more detail, but in short, PWM is where you keep a fixed period, so here it is the time from rising edge to the next rising edge, but you vary the percentage of time spent in the high state by changing when the falling edge occurs. For this one, you can see that it is 33% high for a '1' and 66% high for a '0'.

The initial series of pulses are equal high and low times. This is usually done to allow the receiver to sync up before actual data is received.

See http://www.micrel.com/_PDF/App-Notes/an-22.pdf for some more details on what they expect for the module.

A typical way to be able to receive this sort of encoding would be to input this into a timer input capture pin of a microcontroller. Or, you can simply connect to a general input and have it sample at 4-5x the PWM period. The algorithm for decoding is not too hard from there.

Alternatively, as suggested by markt, you can work your way back to the temperature sensor itself. But, if it is an analog output signal, you will have to convert it to digital yourself and may have slightly different numbers in your logging from the original output.

People of my acquaintance usually call that encoding technique "PWM", which I suppose is a reasonable description.

My first thought looking at your data stream, and assuming that you're correctly guessing the polarity of the bits, is that it's a 12-bit ADC reading, LSB first, with a leading '1' as a start bit. I'm going with LSB first because the start of what is presumably the next reading shows a single-bit variation and it's unlikely that an ADC reading of (pool) temperature would vary by a 2nd or 3rd MSB in that short a time frame.

I'd dig a little further into the system, back to whatever is generating the data (as opposed to transmitting it), see if you can identify the temperature sensor, and look for some correlation between the transmitted data and the temperature.

I've started decoding the Acurite 617 and here are my initial observations. I can tell you that the last byte is some sort of "check" byte and the next to the last three bytes contain the temperature. These byte are also sent with using the 7th bit to make even parity and only the lower nibble of each byte is used. I've written an Arduino program to capture the data and have seen the following messages/temperature.

Other data/temps I have seen are:

Using this you should be able to do the "straight line" (assumption) conversion.

Since I do not have a good scope (and the fact that the data is sent once a minute) I am not sure about my timing. I see the sync HI and LO as being 720 usec and the data bits being 240 and 480 usec.

Hopefully I will have more info later. I have a bunch of these. As soon as they start to leak I remove them from the pool and dry them out for use around the house. The later 617 modules (with the screw off bottom and O-ring) seem to last longer.

Almost all RF transmission schemes are going to need to have several characteristics in their data encoding protocols. These would include:

The odd ball pulse that you noted is most surely the sync pulse indicator.

The data encoding appears to follow what I have seen referred to as pulse width encoding. This is a fairly common technique where the one transition direction follows a constant frequency leading to constant width bit cell times. During the bit cell the active pulse is presented as 25% of the bit cell time or 75% of the bit cell time. This scheme is not a pulse to pulse DC balanced encoding scheme like Manchester encoding offers. It is a common technique with pulse width encoding to provide DC balance within the message protocol by sending extra bits to create an overall balance in the whole message. In its simplest form the data is sent twice with the second copy logically inverted.

In your example it is odd to see pulse width modulated data occurring before the sync pulse. However it is still a feasible scheme if the data decoding algorithm is designed the accept the received data with the sync in this position. It is possible that the unit is sending one type of data before the sync and one after. The split could be between sensor address / temp data OR true data / inverted data.

It is interesting to note that it almost looks like the transmitter unit is using a different software algorithm for formulating the positive pulse widths for data cells before the sync pattern than for the pulse width at and after the sync pattern. This implies that there may be a separate hunk of software generating the earlier pattern than that for the subsequent part of the pattern. This difference of pattern could imply that the data source in each case required different handling in terms of how it was accessed bit by bit. The difference seen in the timing diagram could simply be an instruction timing or two difference in the pattern generation loops.

Not the answer you're looking for? Browse other questions tagged encoding or ask your own question.

1
What's the name of signal encoding used by WS2812 LEDs?

2
Differential Manchester Encoding
0
How to determine servo signal encoding
3
Spectral properties of EFM encoding
2
8b10b encoding: Calculating running disparity for multiple words
5
Why the one-hot state encoding has an advantage in decoding compared to binary state encoding?
1
Understanding an unknown digital encoding
1
What kind of serial encoding is this?