For an LTI system in frequency domain, Y(s) = H(s)X(s), where symbols have their usual meanings. I am confused in what this represents, i.e., is it true only in steady state (in other words is it only the forced response) or is it true for all times including the transient time (forced plus the natural response).
Because when we take the sinusoidal response of a system we calculate the steady state response by calculating the magnitude of the transfer function H(s) and multiplying it by the input sine.
But when we calculate the inverse laplace transform we get the total output of the system.

You can understand this in the following way. A LTI system can be described in the time domain by a linear differential equation with constant coefficients like the following:

Keeping in mind the differentiation property of the one-sided Laplace transform:

you can take the L-transform of both members of the differential equation and you obtain the following equation in the s domain:

If you factor out \$X(s)\$ and \$Y(s)\$ in the transformed equation and then isolate \$Y\$ you obtain the following, which is an expression for the entire response (zero-state + zero-input):

The first term is \$H(s) X(s)\$ and gives you the full response of the system when it is excited by \$x(t)\$ when its initial state is "zero" (i.e. no energy stored in caps and inductors, if we are talking about electrical circuits), the other term represents the part of the transient response due to the energy stored in the system at time 0.

Note that this latter depends on the values at \$0^-\$ of y, x and their derivatives. From a circuit POV these values are related to the initial conditions of the circuit: currents in inductors and voltages across caps.

Take as a simple example an RC circuit like the following: 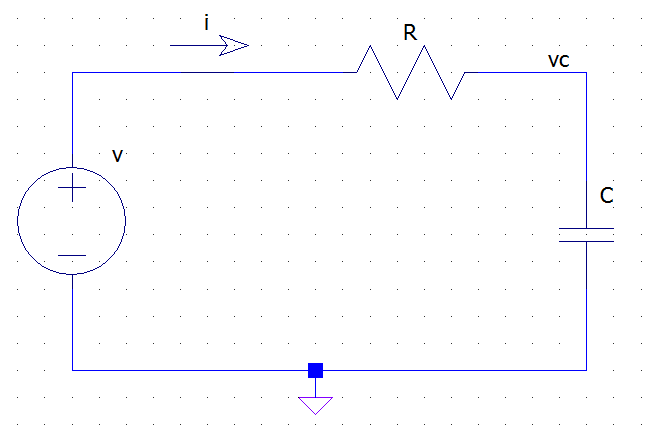 from the KVL and Ohm's law we have:

but the v-i relationship for the capacitor tells us that

Thus we have the following differential equation for the circuit:

which, after simple passages, becomes:

Not the answer you're looking for? Browse other questions tagged transfer-function laplace-transform or ask your own question.

3
How to determine sinusoidal steady state response from bode plot
0
Some questions on a passive network's transfer function and time domain response
2
Meaning of transfer function in s evaluated at a complex number
1
Frequency Response Function Estimate via FFT Question
1
How to obtain the steady state response of the sampled periodic signal data?
4
How does Laplace transform include the transient response?
1
Response of a RC circuit and Frequency Response Theorem
1
Differential Equations vs Phasor vs Laplace
0
How to separate transient and steady state solution when using the Laplace transform?