How can I run 3,6V MCU on a fully loaded 4,25V Li-ion battery? Normally the battery would be 3,6V, but on fully charged it is 4,2V, it would kill the microcontroller.

Is there a solution without any fancy LDO/IC? Zener calculator said 3V is too low for Min input: http://www.calculatoredge.com/electronics/zener.htm

If you build your own regulator, there may be problems with load response, current draw, regulation, and/or oscillation. In a MCU application, this can lead to hard-to-find bugs. I would strongly recommend a small LDO regulator like the Microchip MCP1700-3302. It costs less than 50 cents.

If you are still keen on building your own regulator, I would start with a design something like this: 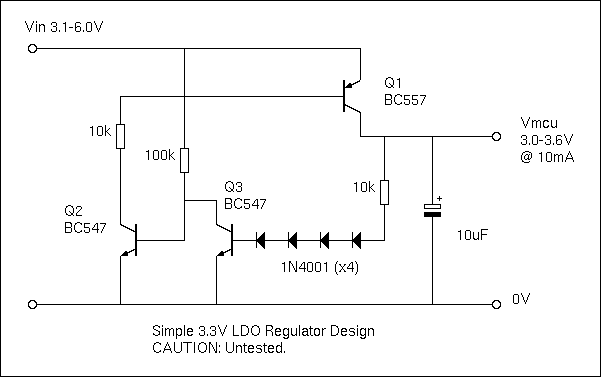 Q1 supplies current to the MCU. Should the MCU voltage exceed 3.2-3.5V (5 diode drops at low current), Q3 will conduct and reduce the current flowing through Q2 which draws current operating Q1. This circuit is untested, so do more research and testing before building it. Designing a good LDO Regulator is not easy.

A silicon rectifier in series with the battery will drop about 0.7V, but will need a minimum load to be sure that it has that drop. Be certain to get a rectifier rated for the expected current draw.

Therefore you would require a 350Ω resistor in parallel with the load to maintain the voltage drop.

A simple circuit that would likely work well for you is to use a P-Channel MOSFET with the drain side connected to the battery and the source side connected to the load (MCU and other circuits). Then connect a 47K resistor from the source to the gate terminal. Also connect the gate to an output pin of the microcontroller. Initially the battery will source power to the MCU through the body diode of the MOSFET providing the nomimal diode drop to reduce the fully charged battery voltage to the lower level needed by the MCU.

The idea here is to turn on the MOSFET by having the MCU output pin pull the gate terminal of the FET to GND when the battery voltage has fallen to a level where the diode drop is no longer needed. The ON state of the MOSFET will effectively short out the body diode and allow the microcontroller to receive nearly the full battery voltage.

An alternate scheme could use one of the analogue comparators available on some MCUs. A couple of resistors and a small diode used for setting a reference level would bias the comparator inputs to be able to detect when the battery voltage has fallen to the level needed for switching the MOSFET. On some microcontrollers with the comparators the output of the comparator is available on an I/O pin. It may be possible to connect this directly to the MOSFET gate without having to use another separate I/O pin to drive the MOSFET.

There may be a cart before the horse scenario here with the ides I describe. It may be necessary to use an external circuit to switch the MOSFET because the MCU may not be able to run properly up till the time it gets around to using software to switch the FET. This would be particularly true with the A/D converter scheme. On the other hand on-board comparator it may just be possible to make it work based in just how the default configuration of the comparator comes up at power on. If that cannot work then the MOSFET switch logic would require some external components to be able to do its job.

I played with that calculator a bit, and it seems to enforce some arbitrary headroom that's not technically required but probably a good idea given what little it knows and its target audience. (Imagine making an AC-DC power supply with poor filtering and a poorly understood answer from this app.)

I also noticed that the resistor values were getting pretty low by the time it gave that error. That's something to pay attention to if you want to go beyond its arbitrary limit. A low-value resistor won't give you a lot of room for an overcharged battery or the wrong charger before the zener blows up from overcurrent.

I assume you're okay with running the micro on 3.0V even though the zener says 3.6V. That could allow a higher-value resistor, with the tradeoff that it stops regulating at a higher battery voltage. From the app's perspective, this is basically a higher minimum input voltage.

Not the answer you're looking for? Browse other questions tagged microcontroller zener or ask your own question.