What are the rules for combining transistors to form digital circuits?

I just read Harris/Harris - Digital Design and Computer Architecture and in it they described how AND/OR/etc gates are made out of transistors. I read the book for fun (I'm not an EE person, my experience with circuit analysis is minimal) so while I can understand how their circuits work to make the specified gate, I'd like to be able to make my own as an exercise.

So is there any general/simple set of rules for beginners on how to connect transistors into working combinational logic units? I'd like to do this as an activity with someone who knows almost nothing about circuit design (no knowledge of KVL/KCL etc) and as I won't be designing any actual circuits I'd rather avoid studying hard on circuit analysis. Can it be boiled down into a list of rules that I could explain to, say, my grandmother?

In your mind you aren't making the distinction between LOW and Not Connected.

When your theoretical arrangement is "HIGH" (its "default") state, the output is connected to Vcc. When there is a high enough voltage on the base, the transistor switches off. What is the output connected to then? Nothing at all. It's actually in an indeterminate state, also known as HiZ, or High Impedance. This is one of the three states of Tri-State logic.

The logic "LOW" level doesn't mean "disconnected from Vcc" but instead "connected to GND". You have to have some mechanism for the output to be connected to the ground rail in order for it to sink current and literally be "a low voltage".

What you describe is basically the inverse of the common "open collector" logic gate: 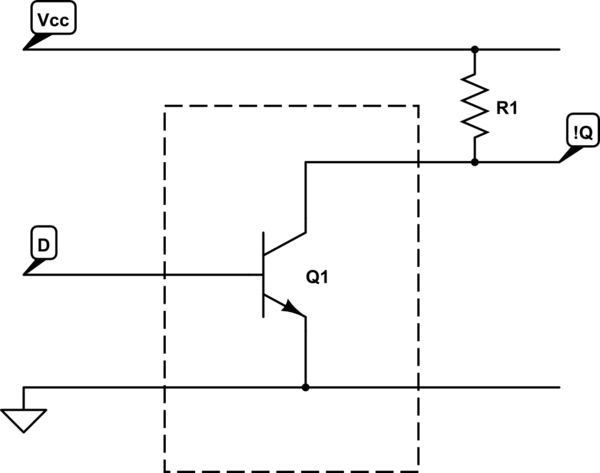 For the logic to make any sense at all an external pull-up resistor to Vcc is required to set the default logic level for the output when the transistor is turned off.

If you were to move the resistor to the inside of the logic gate (the dotted line) then you have what is called RTL - Resistor Transistor Logic.

This is perhaps the easiest logic to understand, since the output is either being linked to ground by the action of the transistors, or is being defaulted to connected to Vcc by the resistor. 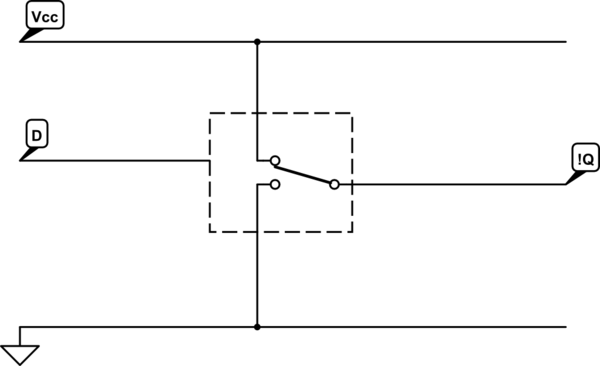 And that's why the totem-pole, or Push Pull arrangement, was born. Two transistors, one connecting the output to Vcc, and one to GND, and only one of them is on at a time. By using a P type to Vcc and an N type to GND you need nothing else to control them since they are naturally the inverse of each other: 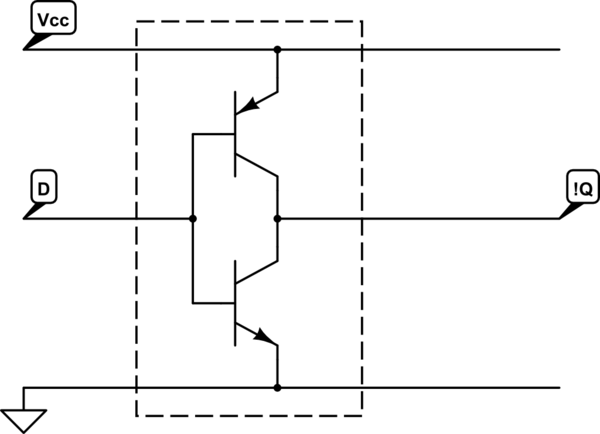 There is usually a "dead" zone between one transistor turning off and the other turning on. This both prevents shoot-through (where both transistors are on at once thus causing a short circuit) and also acts as a noise margin, which you don't get with RTL. For instance, take the following little chart: 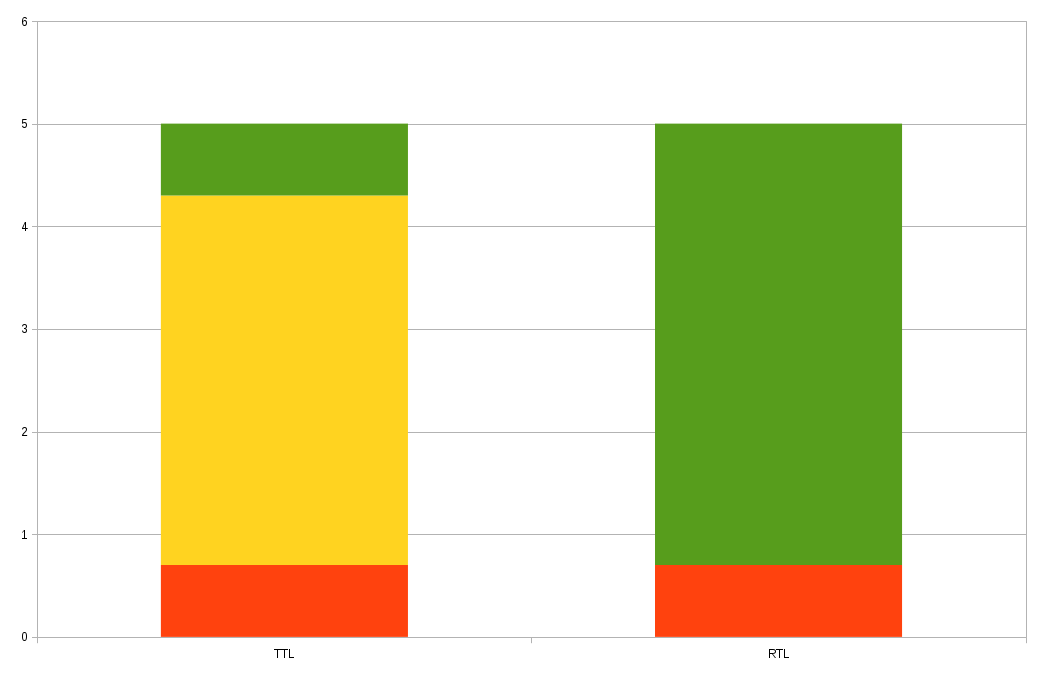 Red is where the input voltage is considered to be off, green where it is considered to be on, and yellow is indeterminate. With RTL, if you put in a voltage at or around the switching point, say 0.7V, then what state will it be in? Will it be HIGH or will it be LOW? The slightest noise on the line will make it flip between HIGH and LOW. Not very good really. With TTL the output would switch between LOW and HiZ, and capacitance on the line or other places in that part of the circuit would keep the next stage gate at the same state for a while, effectively destroying the noise.

Can it be boiled down into a list of rules that I could explain to, say, my grandmother?

The aim of a given logic family is

That may sound somewhat waffly and vague (and indeed it is) BUT it also is a fair description of what is being achieved.

The transistors themselves are essentially independent of the functions being performed but play a part in allowing the rules to be met.

The rules of how to use transistors in this context boil down to "should produce the desired logic function and meet any level and loading conditions which have been defined for the system being built, at speeds and power levels that meet objectives."

If the output uses an N and P channel part working in unison you can be essentially certain that it allowed some design constraint to be better met than was possible by using only an N or a P channel part plus a resistor.

Look up, in the context of logic circuits and electronics, the terms

These should help vastly:

Note that EVERY result is a link to a webpage - usefulness will vary greatly but you can see at a glance what is liable to be of relevance.

A few minutes study of these should make your grandmother's eyes glow. And yours.

RTL, DTL, TTL are in order of historical development and sophistication. RTL has the advantage of low complexity at the cost of rice pudding skin performance levels.

These will be familiar in the context of your original questions:

And, of course, ECL & friends - A parallel universe - amongst the very first and still going strong in modern versions for super high performance niche applications.
E.C.L. logic - WARNING - this is a somewhat unusual system. Very fast, power hungry, quirky. Older versions use multiple and unusual power supply levels. Newer ones use fewer supplies and are at the leading edge for super high speed logic.

I wrote the following initially but decided that while it is valuable it is also "somewhat hard going" [tm]. I added the searches above as an easier path.

For interest I Gargoyled on a string of many of the above and obtained one 'hit'.

The original CIRCARDS have diagrams which are absent from this files, alas, but it provides many clues liable to be of value to your grandmother.

And this is "pay dirt" for you, although it may not at first be obviously so:

Note that "combinatorial" and not combinational is the correct term in this context (don't blame me :-) )

Russell gave a great overview of various logic families, and you should explore the many references in his answer.

DTL has some performance improvements over RTL (such as greater fan-in). On the other hand, it is simpler than TTL (transistor transistor logic) circuits for the same function. (Logic designers quickly switched over to using TTL for integrated circuits because its easy to implement transistors on an IC.) All of these (RTL, DTL, TTL) used BJT's (Bipolar Junction Transistors). They were later replaced by CMOS using FET's (Field Effect Transistors), which use much less power.

The two building blocks of logic circuits are the NAND gate and the NOR gate. All other logic functions can be made out of either of these two. (For example, the Apollo guidance computer used 5600 3-input NOR gates and nothing else to implement all of its logic.)

The truth tables for the NAND and NOR gates aare:

Here is a simplified NAND gate: 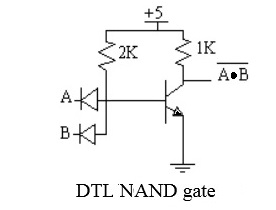 Here are some DTL circuits for implementing NAND, NOR, AND, OR, and NOT: 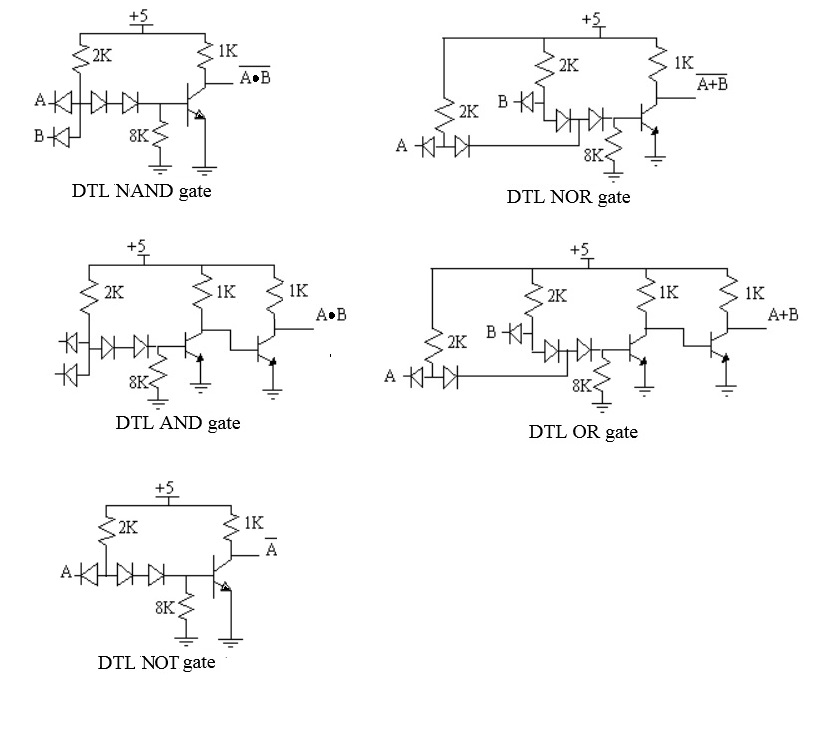 You can use the ubiquitous IN4148 for all the diodes, and any general purpose NPN transistor such as the 2N3904.

Note that the AND is just a NAND with an inverter tacked on, and the same for the NOR and OR.

These circuits are adapted from this document, which includes an exhaustive circuit analysis of the NAND gate circuit.

All of the circuits are designed so the outputs of one gate feed into the inputs of another.

Probably the most basic rule is that each output should be connected to either power or ground at all times, but never both. There are a couple exceptions to this, but it's a good starting point for CMOS logic. You can't leave an output floating (as in your suggestion) because CMOS inputs don't have a path to power or ground, so their values would not be predictable.

9
The 'gap' between understanding of transistors and their application in real circuits
10
Usage of a transistor configured as diode
1
What is the best transistor for a large RTL (resistor transistor logic) project?
0
Explaining the need for two transistors in Not Gate
6
How do the VLSI design rules for finFET differ from traditional MOSFET/CMOS design?
1
Understanding the working of a NAND GATE using NMOS Transistors
7
How can I make an XOR gate with basic components?