Why doesn't the 'V' curve of a synchronous motor touch the D.C. field current axis?

It can be seen from 'V' curve.

I guess you talk about the fact that the V-curve bottom tip does not becomes zero at zero excitation current.

The fact that this happens can be ascribed to the saliency of the rotor. Torque(and therefore active power) is produced in two ways:

Torque is directly proportional to active power(rotation speed is needed for conversion). 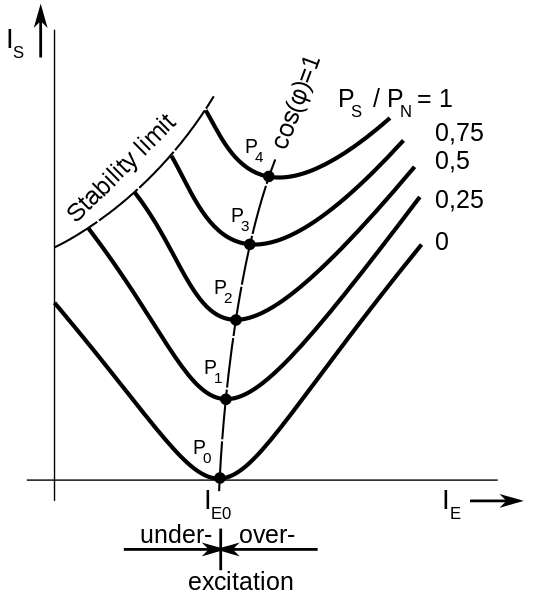 The V-curve shown above is for non-salient machines. That means machines that have a rotor that is same along the whole circumference. From this we conclude that there is no reluctance torque, and therefore no reluctance torque related active power.

In your case however if you have a salient rotor, you will get power because there will be reluctance torque and therefore active power, even when your armature(excitation) current is zero.

Not the answer you're looking for? Browse other questions tagged motor synchronous or ask your own question.

3
In field controlled dc motor, why does the armature current remain unchanged even if it is affected by field flux?
0
Why does the stator field rotate at the same speed as the rotor field in a synchronous generator?
0
Why does a synchronous motor run at synchronous speed if we reduce excitation to zero?
0
In a shunt DC motor, how quickly after losing the field will the armature current increase to its V/R limit?
2
Why doesn't the number of poles affect the angular velocity of a DC motor?
3
Why an iron disk doesn't rotate at synchronous speed in a 3-phase AC motor?
2
DC motor: why is torque NOT DEPENDENT on the angle of rotation?