I bought a 5m LED strip from Ebay and connected it to 12V 1.5Amps. I am a starter in engineering.

What kind of potentiometer do I need to use to lower or increase the brightness? How many Ohms do I need for it? PS: if there is a formula I`d like to hear it also :D

This is not trivial.

The [R]esistor is important because it controls how much current goes through the LED. The brightness of an LED is controlled by current; the LED's voltage itself usually doesn't change much. (So if you hook up an LED directly to a power supply, it could easily blow up, even if the supply's voltage is close to the LED's voltage. Your strips avoid this by including the resistor internally.) The current is the difference between the supply voltage and the LED voltage, divided by the resistance in ohms: I = (V - Vled) / R

So, to change the brightness, you need to vary the current, and you want to do this using a pot. There are two ways you can do this: 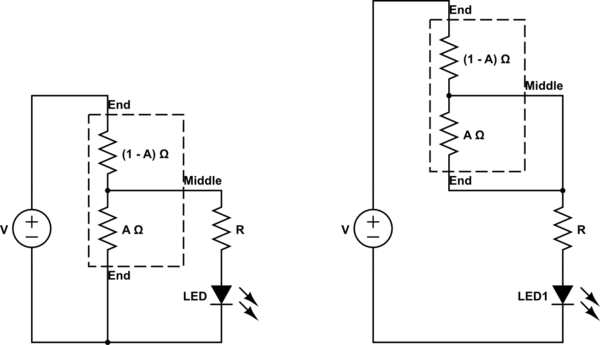 where A is the position of the pot as referenced from one end of its travel, times the total resistance of the pot.

In the first example, you effectively modify the supply voltage as [V * A], and at the same time you add [(A in parallel with (1 - A)) * total_pot] to the existing resistance R. Feed that into the current calculation, and you get the new brightness. [1]

In the second example, you only add [1 - A] to the existing resistance R. Feed that into the current calculation, and you get the new brightness. [1] You can connect the unused End to the Middle like I did, or you can leave it unconnected. It works the same either way, until the pot gets old or gets dirt in it; then the difference is whether you want minimum brightness or nothing.

[1] This brightness is still in units of current, and the LED will produce so many lumens per amp at a fairly constant rate. However, your eyes don't see it that way. It's a bit like audio, where a physical multiplication results in a perceived addition.

All that being said, I would not recommend a pot for this. Yes, it would work...for a while...but as Scott mentioned, the pot itself will dissipate some power and get hot. You can use one anyway with an appropriately rated pot (since you have current already, Power = Current^2 * Resistance), or you can be more efficient with a PWM controller. The PWM version should probably be a separate question.

I think you are asking the wrong question. A potentiometer or rheostat used for this purpose would have to be very large, expensive, bulky and would get quite hot. There is also not enough information for us to help you on specifying it.

It would be preferable to use a PWM device to dim the LEDs. Such devices are commercially available, for less than the parts would cost, but links to such are considered off-topic here.

If you wanted to build one and have at least some rudimentary skills in electronics, it's possible with a 555, a power MOSFET and some resistors, diodes, a few caps and a small potentiometer. A very simple project.

All the info seems to suggest that you need a 12V supply that can provide 5 Amps. At 5Amps, they're not going to be real easy to dim with a potentiometer, which often aren't rated for power like that.

Not the answer you're looking for? Browse other questions tagged led potentiometer 12v ohms or ask your own question.

8
Large difference between specced values and real values for LED strips?
1
How big should battery be to power two strips of led for few hours?
1
How does underdriving a powerful (eg. 50w, 100w) LED chip work?
0
Potentiometer as Voltage regulator 12V to 6 - 12V range
3
How many ohms do you need before you need a resistor?
1
Burned out potentiometer
0
Flexible Potentiometer Strip
2
TIP120 LED strip dimming with flickering problem + questions delay