How can I control a chain of LEDs/buzzers from a single Arduino pin?

In an effort to make a wearable piece of electronics, I would like to be able to control a large number of buzzers, sewn together on a string, from a single output pin on my Arduino.

The idea already exists: Several companies offer ready-made LED chains which can be controlled through a single pin (see for instance here). These purpose-made LEDs have 4 pins: Two for electricity and two for receiving and transmitting a signal. If I understood it correctly (and please correct me if I am wrong), this is simply a serial shift register: Bits are pushed through the system until all are in place, then only requiring a latch signal to activate them.

However, in my case, the buzzers I intend to use have only the electricity wires and have no way to be chained together, yet controlled separately. So this got me thinking: Can I, through simple means/tools, construct my own chain which I can address through a single pin on the Arduino? If so, what would I need to do & buy to accomplish it? In essence, what I am trying to achieve is maybe captured in this picture. 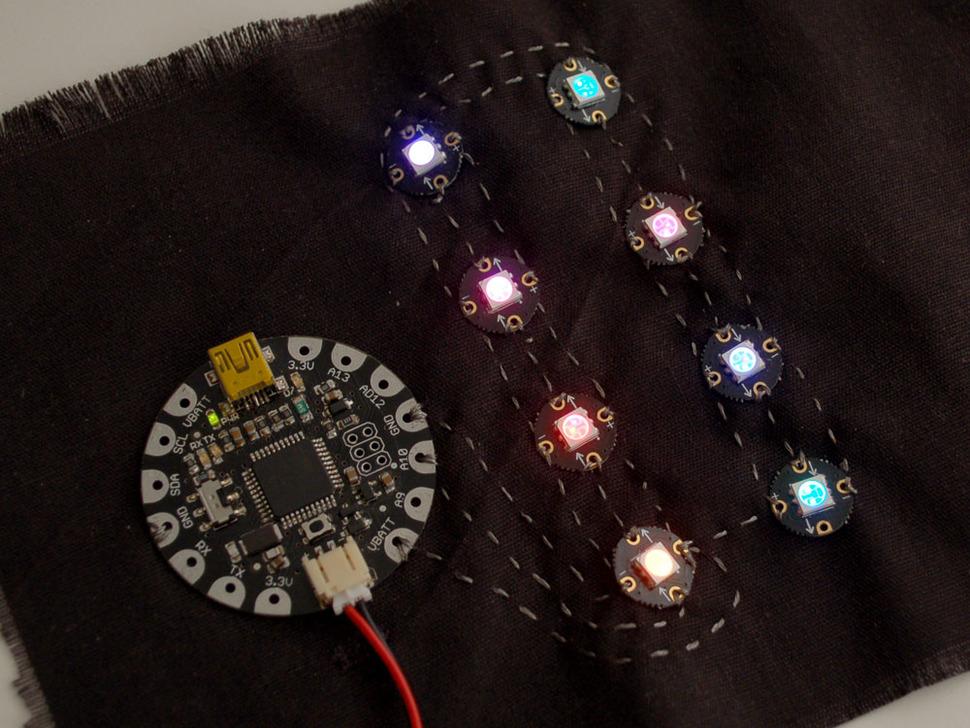 I am aware that this could be solved with shift registers and/or I/O expansions, but this causes problems for me because I would need one wire per buzzer, and so with a large number of buzzers, I would be forced to purchase a big number of shift registers and sew a large amount of conductive thread to serve as wire.

I have seen similar questions to this one (see here, here and here), but the answers there always tended to go for solutions which would allow me to create 8 wires out of a single one (so using shift registers, 1-wire 8-channel switches, etc.), which is exactly what I am trying to avoid, if at all possible.

Edit: Clarification - What I mean by more wires is this: If I can link and control all the buzzers (which will probably be upwards of 30), through a single chain, that means that I have 3 distinct wires, as in the example website for the LED design I gave above: two power lines and one to send controls over.

On the other hand, if I placed multiple shift registers (I'd probably need at least four chained shift registers?), I'd need one wire from the SRs to each of the buzzers, which means I would need two power lines and 30 wires, which is a nuisance.

From your question I think you have one of those black plastic buzzers in mind that has two wires? 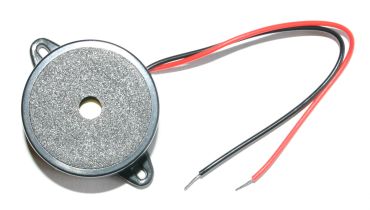 If you restrict your design to 3 wires (daisy chained through all buzzer locations) you won't escape from having a chip at each location. Once you have a chip you will need a PCB. There are much smaller buzzers/speakers than the type you have in mind that can be mounted on a PCB. Put a small < $1 micro-controller (a PIC 10F200 would do, but I would prefer a small Cortex M0) and you can program it to do exactly what you want, including beeping at various frequencies etc. But this does require some programming! 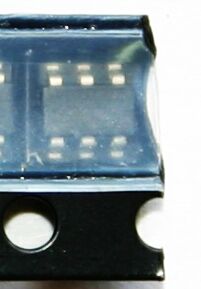 You could use the Dallas 1-wire protocol (eg. DS2413) to control many buzzers or LEDs.

Each chip has a unique 64-bit address, so each output could be addressed individually.

You would need one chip for each location.

With 1-bit shift registers (e.g. sn74lvc1g374 ) you'd have 30 chained shift registers. That would require 0V, +V, clock, data and enable wires. If it's OK to pulse the buzzers for microseconds while loading the data, you can do without the enable wire.

Having only 3 wires requires a more complicated protocol such as WS2811, which is designed for LED driving but you might be able to connect a buzzer to its PWM output via a suitable transistor.

It's simply a matter of combining a few parts. A shift register, or I2C or SPI or 1-wire gpio expander, depending on your microcontroller, which then connects to n channel transistors or mosfets, which drive the buzzers. Just like you would directly, but with the ic instead.

Misread the question. Given what you want to achieve, a string of buzzers without multiple wires, you would still need to purchase multiple ICs, one for each buzzer. These would be 1 or 2 bit shift registers, just like the smart led strips have. Either one ic per buzzer, or multiple wires per ic expander.

Not the answer you're looking for? Browse other questions tagged arduino microcontroller or ask your own question.

4
Help identifying a motor and how to control it with an Arduino
4
Sharing Clock and Data for 74HC595 and CD4021B Shift Registers?
0
How can I use a single 74595 to drive two different IC's?
2
Chain 16-channel analog multiplexer/demultiplexer
1
How to extends Arduino Mega to 250 I/O pin
0
(opto)isolated PISO shift register able to “read” at 24V
1
What is the best practice for driving IC enable pins?
3
Why is serial output from shift register offset from others?
0
Vertical Farm Automation
0
Chaining 25 74HC595 shift registers together