I have designed a power delay switch which is intended to cause a short delay while a reservoir capacitor fills up before giving power to my microcontroller due it needing a short burst of high current before settling down to it's operating current of around 5uA.
The power delay circuit (see below) itself works fine and gives me the delay I need and everything powers up as it should, however my issue arises when the circuit loses power. 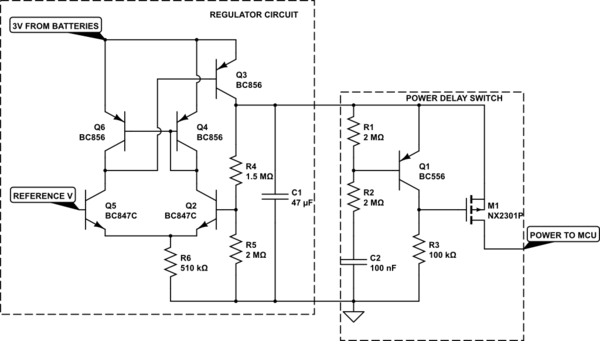 The circuit gets 2V from a regulator which regulates batteries (3V) down to the 2V I want to power the MCU as this will ensure that the supply voltage is constant which makes ADC readings and calculations easier to calculate.
Now the problem that I am having is that when the batteries are disconnected (circuit loses power) the two capacitors (C1 and C2) take a long long time to discharge (about 3 minutes) - this isn't a problem is power is reestablished quickly (under 2-3 seconds) which is how long it takes the voltage to drop below the MCU's minimum supply voltage, after this point, however, the MCU completely shuts off and won't power back on unless the capacitors fully discharge (<100mV) and then the power can be applied again and it will work as it should. So I feel I need a way of completely draining the capacitors in the event of power being lost. It might be worth noting that the capacitors initially discharge fairly quickly down to about 0.6/0.7V before beginning the painfully slow discharge process - if anyone has any bright ideas as to how to resolve this, that would be great.
Another alternative is to possibly design a slightly better delay switch that will cut the power line from the MCU when power is lost - as you might notice this one will not do that, but again I can't think of any ideas for that as current consumption is a big thing and this current design draw virtually no current once running properly.

Once the reservoir capacitor voltage goes below 0.6V there's not much you can do, because any transistor you try to use to discharge it further will also be turned off. However you could discharge the capacitor in the time delay circuit before the reservoir capacitor goes below 0.6V. This will completely remove power from the MCU so it should reset properly, and when the battery is reconnected the power on delay will be reapplied.

A supervisor IC could be used to discharge the timing capacitor, but are any available which have a low enough operating current and trip voltage? Alternatively you could make a discrete circuit using two FETs and a resistor, like this:-

You could try with a relay which is powered by the batteries and is placed in series with a bleeding resistor. Of course, powered = open switch. The relay will also draw some current, but there's not much you can do without additional power consumption.

Also, you could try with a PNP transistor that has the base connected directly to batteries and has a resistor between base and ground (a pull-down resistor): whenever powered, base is high and PNP is open; whenever power is removed, base is at ground, PNP is closed and the capacitor discharges through an additional bleeding resistor. Power consumption is basically as low as it gets.

Perhaps you are looking for a power management supervisor IC (they have funky names and flavours)? Essentially something that holds the IC's reset/enable until the voltage rail is sensed to reach a certain level. Similarly they can be made to begin a shutdown process if they sense voltage falling below a safe level. Something like this?

Not the answer you're looking for? Browse other questions tagged transistors capacitor switching or ask your own question.