I'm having trouble in explaining kirchoff's laws to my cousin who is studying in first year Engineering. Can somebody explain me in simple plain english. Thank you very much in advance :)

Kirchhoff's current law (KCL): the sum of the currents in a node is zero.

A more general form of KCL says that the current entering a closed boundary is equal to the current leaving it: 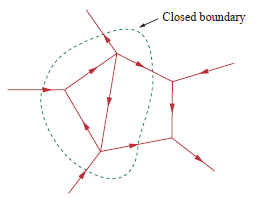 Kirchhoff's voltage law (KVL): the sum of the voltages in a closed circuit is zero. If you have a circuit consisting of a battery and a resistor as a load then the voltage over the resistor is \$\mathrm{-V_{bat}}\$ (the minus sign means that if you go clockwise through your circuit you go from \$-\$ to \$+\$ for the battery, but from \$+\$ to \$-\$ for the resistor).

This goes for every closed loop path you can find in a design, no matter how complicated and how many branches there are.

Kirchoff's law: What goes in must come out.

In other words, the "xxxx" is say, one square on the sidewalk. No one is allowed to linger there. Everyone who steps into that square must step out! Thus, obvious, number in equals number out!

Now, split one side into two sidewalks. Hard for me to draw here, I hope this comes out right:

Now, people walking in the top and out the bottom pair. It is still true, the number of people crossing over the "xxxx" point must be the same in as out, thus if the top is an input and the bottom two are outputs, we can say the sum of people coming out of the two outputs equals the number going in the top.

Any single point in a wire is like our single square on our sidewalk. It you look at any single point anywhere along it, as many electrons are coming into that point are also going out of that point! Because none "linger". Simple, eh?

It is no more complex than this: stick a finger in the water in the river. As much water rushes into your finger as leaves it! Literally, the current across any spot, sub-spot, area, group of spots, whatever, is the same entering as leaving, unless it is "pooling up", ie, experiencing capacitance! Multiple tributaries coming in, multiple streams going out, doesn't matter, water across any point experiences output = input.

Look at the first diagram above in stevenvh's answer, with the purple arrows, some pointing in and some point out. Rearrange them so all the arrows pointing IN are on the left, all those pointing OUT are on the right. Think of these as our sidewalks. Only for electrons*. The number (of people or electrons) coming in from the left must equal the number going out on the right. This is obvious, eh? Because none of them are allowed to linger at that point in the center (ie, it has no capacity, get it, capacitance!).

*) Because electrons are people too!

I'll try to answer this as simple as possible. This was how I understood it a few years ago. Am a computer engineering undergrad.

The basic idea is, that always, INPUT = OUTPUT.

So with a battery, or a voltage source (input) is always equal to what goes into the other parts of the circuit, or whatever power lost (output).

So applying this concept with KVL:
Voltage Source [input] = Voltage across all the circuit components [output]

Making one's job just to find the voltages across the different components, and their respective polarities due to current direction.

Now with KCL, the same input-output concept goes though with a different approach: What goes in a node [a dot], must come out.

So any current that goes in a node, must go out. Whether it be 2 or 5 currents going into a node, there must be at least one direction where it goes out. Ex:
Current into1 + Current into2 = current out 3

Remember that a current across a resistor goes from a higher polarity to the lower polarity.

Making the above assumptions won't hurt your calculations as they'll all follow through with your answers at the end. Meaning, if one would assume a direction for a certain current, and gets a negative result, it just means your assumed direction is wrong, and is in fact, the other way around.

I hope this helps! And maybe you can make the approach with your cousin by going through Mesh and Node analysis. It might be better. Just show examples! :D

3
How do I write KVL in this circuit?
1
Discharging RLC. Kirchhoff's second law
0
Kirchoff's law finding the voltage across resistors
0
Kirchoff's Law Loop Equation Problem
0
As we go around the circuit, the total voltage drop must equal zero
0
How Does Kirchoff's Law Make Sense
0
How do superconductors avoid breaking Kirchoff's Voltage Law?
0
Trouble understanding a given circuit for an LDR pulse sensor
0
Will Kirchoff's voltage law work in a vacuum
2
Circuit analysis (Current intensity)