Are these MIDI circuits equivalent?

I've been creating a MIDI Thru box project and was trying to avoid having so many resistors. Points A-G may (or may not) have a load connected to them. Are these equivalent, or do I really need to include a resistor on each branch? 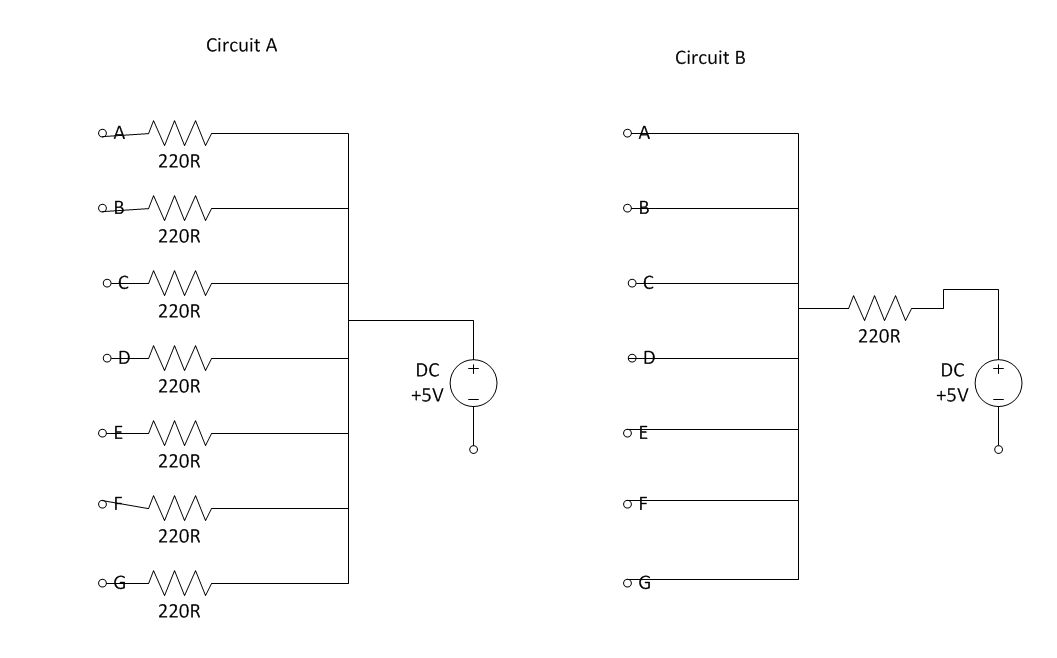 Is the current/resistance/voltage equivalent from the DC supply to each lettered branch in each circuit? More importantly, can anyone explain (or provide a link that explains) how you came to the conclusion? I'm a developer just starting to learn electronics.

Pete, I don't know much about MIDI circuitry, but it appears that the outputs are simple open collector circuits with pull up resistors and inputs are opto-isolators. If that's not reasonably accurate, then somebody please correct me.

Given that understanding and assuming that the power supply you're using is adequately large so we can assume it'd capable of providing as much current as you want, then you could think of the two circuit options like this:

They are not equivalent.

In Circuit B, the 1K and 10K would be in parallel.

This is like a fan-out circuit to drive multiple MIDI inputs?

If I understand MIDI correctly, each of these outputs feeds directly into an LED, not a resistive load, like this: 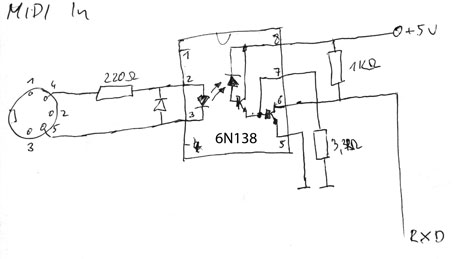 Circuit B, on the other hand, puts all the LEDs in parallel, so they each get 1/7th of that current = 2 mA. This could prevent them from lighting enough to register as signals. Also, any variation in the voltage of the LEDs (if one optocoupler uses an IR LED and the others use green LEDs, for instance) would allow the lowest voltage LED to hog all the current and prevent the others from lighting at all.

(to clarify, they circuits aren't really equivalent - my response above is mostly in response to the implied question of, "can I replace this part of a more complex circuit and get equivalent results)

I think a more interesting question is, in your particular circuit, would replacing the 5 resistors hanging off the 5v line with one resistor cause any problems?

If you look at the standard MIDI circuit (I used this as an example) and compare it against your circuit diagram, you can see why it's designed the way it is. It appears as though the resistor is there to limit current. The MIDI output circuit has (2) 220 resistors while the input has just 1. When pin 5 of the output goes low current can flow across the opto-isolator from the +5 line on pin 4 (and passes through (3) 220 ohm resistors in series Ra, Rb, Rc in the diagram). If you short any of the lines the various resistors will keep too much current from flowing.

If you take a look at the datasheet for the inverter or the opto-isolator even if you removed the 220 ohm resistor on the +5v side of things you still be within tolerance of the parts (not flow too much current) (but don't do that - a short could cook parts in that case).

So it looks like you could use just 1 resistor in your particular circuit so far.

What about power? How much power will this resistor need to handle?

So it looks like you could replace it with a single resistor.

One other consideration - what happens if that 1 resistor fails? If it fails as an open circuit, all 5 ports would stop working. In the original circuit only a single port would be dead. If it shorted, the other resistors in the circuit would probably keep anything from cooking (so you're still safe there), although if you have multiple shorts (between equipment) you'd still cook things, as mentioned above.

Not the answer you're looking for? Browse other questions tagged resistors voltage current-measurement midi or ask your own question.

4
DIY MIDI knob Controller
1
MIDI status bytes
9
MIDI IN : many circuits
3
Expressiv MIDI guitar implementation
3
Using a MIDI connector both as MIDI In and Out (not simultaneously)
1
MIDI out / thru circuit questions
1
Equivalent circuits with one or multiple resistors
0
Making a simple 1 MIDI IN + 1 arduino MIDI OUT merger (MIDI THRU + TX)