I have for over a year now tried to figure out both the electronic aspect and the software aspect of my project.

I have somewhat successfully managed to make the overall idea to work, the bumps I have come along the way are quite frankly stressing me out.

Basically a beat-detection device with a very small formfactor.

I am using an Arduino Uno as a prototyping device, but I have an Arduino Mega, Sparkfun Micro and several other development boards it stock to use if needed.

I want the microcontroller to read analog audio, convert it to FFT or FHT or any other easily translated data, read the lower frequencies where the Kick of the music is presented, and finally measure the timing between each kick to calculate the BPM of the song.

The frequency range of where the Kick in the music is present is around the 45Hz to 55Hz range and is most distinguishable in that area when looking at it in a spectrum analyzer.

This should also be correct when doing FFT/FHT with a microcontroller due to the nature of raw analog to digital to FFT/FHT conversion.

However, it may differ and is most likely to differ if a microphone is used to listen to the audio.

What I have successfully accomplished:

So the two most important components of the project is in place.

What I have problems with:

So the Pull-down is the way to go.

HOWEVER, with the pull-down present, harmonics of the sinus tone is introduced but no peak at the lower freq area as long as no sound is present.

With the pull-down NOT present, the harmonics vanish, but the peak is present.

What more can I try before I throw this project out the window?

Approaches and suggestions need to be component-limited and preferably software oriented.

I think the youtube guy might have been on the right track, but the confusion is that "ground" is typically centered between two supplies for most analog circuits, and coexistent with the lower supply for most digital circuits. So whether you pulled it up or down, the DC level was already clipped, and so anything added to that (your music) was also clipped automatically.

Instead, you need to pull it to a point halfway in between. The easiest way to do that is to simply pull it up and down at the same time, using two resistors. That should center it nicely, with the exact level being determined by the ratio of the two resistors.

From a rather long discussion in the comments and a link to a different forum (http://www.openmusiclabs.com/forums/viewtopic.php?f=4&t=493&sid=c89646aea90012eb0fbcbf4161ab5b74), it seems that the problem has to do with DC offset. The original schematic attempts to solve this, but it includes an unnecessary adjustment that is easy to get wrong. Here's a better way to do it: 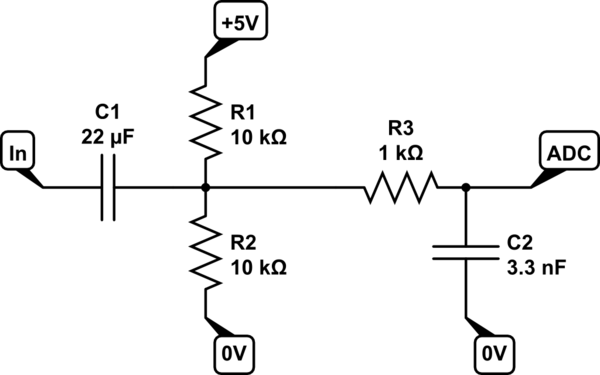 Make sure to keep R1 and R2 equal. The cutoff frequency is described above.

The purpose of the original adjustment seems to be to fine-tune the DC offset to match the ADC, but I expect enough variation from other sources that it's easier to just make it close and use a digital highpass to finish the job.

As shown, the cutoff frequencies are ~1.5Hz and ~48kHz, so you'll want to get around to sampling that ADC channel at least 500kHz. Why not 48kHz like standard audio? Because this filter rolls off very slowly. Only at much higher frequencies does it finally attenuate noise enough to not mess with your signal when shifted down by aliasing. If you don't want to run the FHT that fast, you can use a more complex analog lowpass, or you can use a digital lowpass running that fast followed by throwing away most of the samples.

Not the answer you're looking for? Browse other questions tagged arduino audio sound dsp fft or ask your own question.

0
Arduino Recognizing pre-recorded sound clips from an audio stream
1
Handling audio signals on a 5v ADC
0
Remove mains hum out of amplifier
1
Sound spectrum analysis, adverse harmonic tones, micropython, adafruit, fft
3
Confusions on FFT of a square-wave in theory and in scope and simulation
0
headphone input to arduino for FFT usage
0
Getting earphone out from music player
1
How to interpret the FFT of the mains voltage in this case?