How To Know If a Fuse Will Work Properly?

I want to know what kind of periodic test we use to test if a current-limiting fuse will normaly open and protect an electronic circuit (a battery charger) if a failure occur (short circuit or over current). Assume that I have a fuse that supports 5A of current and that if current is above this value it will damage the battery cells (venting). If the fuse, which is the last resort in my protection scheme, does not open (stuck) then my circuit will be damaged.

What is the periodic test we can use to be sure that the fuse can safely open in case of short circuit or the current is above the max value (5A in this example)?

I think maybe you misunderstand how a fuse behaves.

So this 5A fuse with 5A of current flowing through it, is guaranteed NOT to open for at least 4 hours. But when the current exceeds 13.75A, this fuse is guaranteed to open within 300 ms. If the current reaches 50A then the fuse opens very quickly. But if the current is only 10A, the fuse won't open instantly.

If you use a 2A Ampere Rating fuse instead, then the 275% of Ampere Rating poing is 5.5A, which is closer to what you want in your example. But if your application typically draws more than 2 amps, then the 2A rated fuse will blow sometimes. Especially if the equipment is left on for a long period of time.

Fuses just don't have a very tightly controlled "open fail" current. They are one-time-use devices; once a fuse is tested to the point of opening, that fuse is permanently destroyed -- so statistical process control is the only practical way to ensure that the fuses are likely to work.

You could perform the same kind of testing. If you're building a batch of 500 devices, purchase a reel of 5000 fuses. (Again I'm assuming picofuse, which look similar to axial leaded 1/4 watt resistors. Glass tube fuses don't come in tape and reel.) When you get that big batch of fuses, you randomly pull out some samples, maybe 100 fuses. Test at two different conditions: - must sustain current below 100% Ampere Rating for xx time - must always open within xx time at test current 275% Ampere Rating (this is the destructive part of the test)

The more fuses you test, the more closely the tested sample will resemble the untested fuses, and the more confident you will be that the fuses work as advertised. But the more time and money you will be spending, to fill the trash can with used fuses.

Further downside is that if you conclude from your testing that this particular reel of fuses is not up to your standards, the distributor might not accept returns of a partial reel. So you'd be out $1400.

A fuse cannot be relied upon to protect any circuit from over-current. If your circuit draws an excessive current (from a voltage supply it is expected to handle) then it is faulty already.

A fuse prevents fire (normally) by protecting feed cables from taking to much current for too long a period and melting. The impact of cables melting is much more serious of course and can lead to electrocution and even bigger fires. Fuses do not protect a piece of electronics from failure.

If you want over-voltage protection then this is a different story and a fuse in conjunction with a zener diode (or crowbar circuit) can do this.

You have to remember that a fuse rated at 5 amps will carry that current indefinitely. 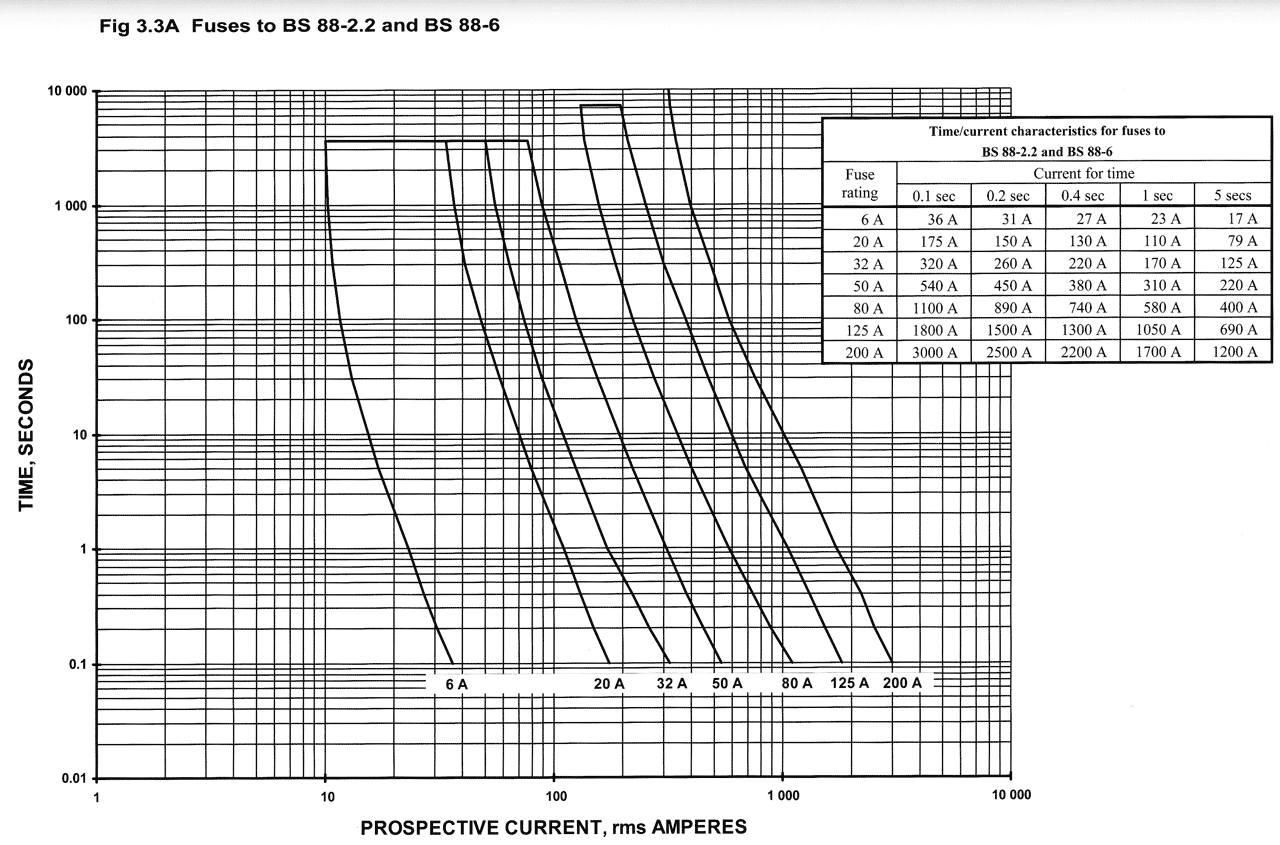 If you look at the curves above the 6A fuse might "break" at 36 amps in 0.1 seconds or take 5 seconds to "break" at 17 amps. This means a fuse does not current limit - it thermally protects.

This isn't a direct reply to the question, but then again, most of the other replies here aren't either, they just state some more or less correct facts about fuses in general, and the protection they may or may not provide to equipment. Here's the general advice from Wright and Newbery's Electric Fuses, 3rd ed., p. 139, before it gets to specifics, specifics which depend on the device protected.

First, the minimum fusing current of the fuse should be slightly below the current which the cables and item of equipment are able to carry continuously.

The item of equipment will usually be able to carry overload currents for limited periods, and the fuse should operate at these current levels in times slightly shorter than the corresponding equipment time ratings. [This refers to the Joule integral as it turns out later.]

Higher currents may flow as a result of faults within the item of equipment and in these circumstances the primary requirement is that consequential damage to the remainder of the circuit should be prevented.

Once we learn more details from the OP beyond the 5A requirement, which is basically just meeting the requirement of the first paragraph in the quote, we'd be able to say more.

If you need more from the book:

IEC TR 61818, an application guide for low-voltage fuses, gives a summary of the advantages of current limiting fuses and it is felt appropriate to draw readers attention to these benefits. Many of these benefits also apply to high-voltage and miniature fuses [...] • Cost-effective protection: compact size offers low-cost over-current protection at high short-circuit levels. • No damage for type 2 protection according to IEC 60947-4-1 and IEC 60947-4-2. By limiting short-circuit energy and peak currents to extremely low levels, fuses are particularly suitable for type 2 protection without damage to components in motor circuits.

So it seems fuses do offer over-current protection at least in the sense that fuse experts use this term...

I am going to assume that you mean a fuse and not a circuit breaker. This means that once the fuse has blown, you will have to replace it.

A fuse consists of a conductor made out of a special material that will melt when a certain amount of current flows through it. This being said, fuses are extremely reliable. They are enclosed to prevent any unwanted reactions with the environment.

Just about the only thing that can go wrong with a fuse is a voltage arc. Fuses have a maximum voltage rating and if exceeded it can cause an arc across the fuse which will most likely cause damage to the electronics.

If you check the voltage rating, and you know you have the correct maximum current fuse, then I would not recommend you test it at all.

But, if you want to test it then you can remove the fuse and attach a power supply to it. This will create a short circuit and should blow the fuse.

The test you can perform on a periodic basis that will prove that your circuit survives up to 5A could be done in the following way.

That should give you the idea of the test flow and the testing equipment that you need to build. It is clearly product specific to work out how the 0 to MAX-A current device gets designed and attached to the circuit.

You may decide to change the 5A test current level to a value that is 20% or 40% higher so that you provide some test margin to assure that the circuit in your product is fully robust all the way up to and over the 5A spec limit.

Fuses are not a great measure to protect circuits with hard current limits; they are there to protect the user from fire and electrocution risks.

A 5A IEC fuse will conduct continuously at 5A. And for quite a long time at 5.1A. And for some time (milliseconds to seconds) at 10A. The exact characteristics are in the datasheet; presumably they're determined by modelling the fuse wire and verified by destructive testing samples from production.

Not the answer you're looking for? Browse other questions tagged safety power-electronics fuses or ask your own question.

1
Are these fuses out of spec?