Why does the current rise and fall linearly in a DC-DC converter?

I don't understand why the current in a DC-DC converter rises and falls in a triangular waveform pattern. I think it has something to do with the energy in the magnetic field, but I don't know any equation to back this up. 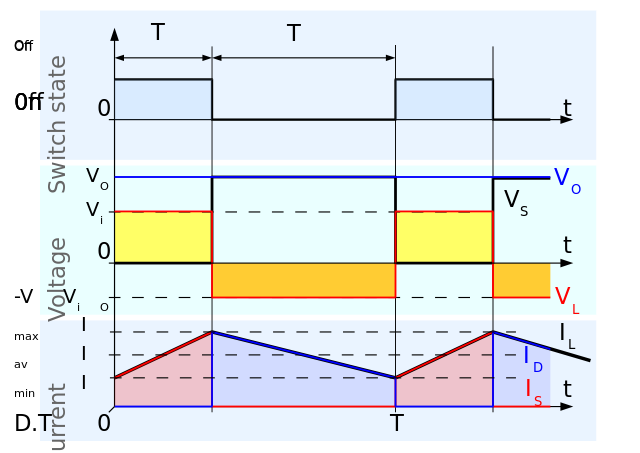 Most real switching supplies will have a capacitor in parallel with the load:

It is this capacitor that makes the voltage supplied to the load approximately constant even with the switching. In the periods where the switch is closed and the inductor is not supplying current to the load, the load draws current by discharging C1.

Also keep in mind, there is usually something regulating the duty cycle of the switch to keep the output voltage, and thus the voltage across C1, at some target.

The triangular waveform is actually an approximation. It's called the small-ripple approximation, and relies on the following assumptions:

When all of these assumptions are met, the inductor voltage is constant in each part of the cycle, which causes the current to change at a constant rate (\$\frac{di}{dt} = \frac{V}{L}\$). The simplest modes uses an ideal diode and switch. In that case, your inductor voltage will equal the supply voltage (when the switch is on) or the supply voltage minus the load voltage (when the switch is off). The latter voltage is negative, which causes the inductor current to decrease.

Assumptions 1 and 2 mean that the converter is in a steady state. Under normal circumstances, the input and output capacitors maintain this condition. Assumption 3 makes it possible to have simple analytical solutions to the circuit equations.

If assumption 4 is violated, the converter still works but the inductor current is no longer triangular. Instead, for part of the cycle there's no inductor current at all! This condition is called discontinuous conduction mode (DCM), and it happens when the load current is small.

In a synchronous regulator, the diode is replaced with a second switch (transistor). In this case, the inductor current doesn't stop at zero, it goes negative! The waveform is triangular, just like CCM. This condition is called forced continuous conduction mode (FCCM). A big advantage of this is reduced EMI.

Not the answer you're looking for? Browse other questions tagged dc-dc-converter inductor or ask your own question.

19
How does an inductor store energy?
3
Ripple current in synchronous buck converter
0
I have a question about the working of an inductor..
2
Flyback voltage in Flyback Converters
4
Current in Transformer Primary (Forward Converter)
1
Energy stored and Lagging of Current In a Inductive Circuit
0
Boost converter, how does diode allow current from inductor to flow towards capacitor?
5
How does the magnetic field of an inductor affect the operation of a DC circuit?
0
Does waveform shape affect transformer eddy current loss as frequency changes but peak voltage is fixed?
0
Ideal voltage source connected with ideal Inductor