USART - I can't get it to transmit anything sensible. All I get is random x's and inverted question marks.

If I change the baud to something completely wrong it puts more random gibberish than just these two characters. 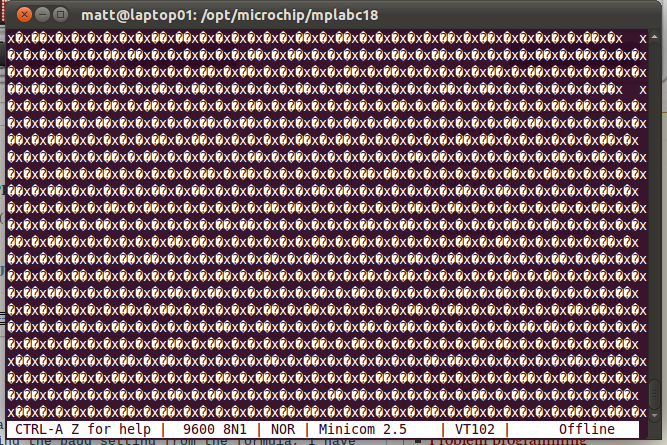 The 103 I caclulated from a 16MHz crystal at 9600 baud according to the formula in the data sheet for the PIC.

So what am I missing?

Timing the data stream with a 'scope I have determined that it is infact running at 2400 baud (setting the computer to 2400 baud confirms it).

I have checked and the crystal is oscillating at 16MHz.

The formula for calculating the BAUD is:

where Fosc is the is the oscillator frequency, and n is the number passed to the baud rate generator.

So what is strange about this UART then?

The problem here is that Microchip sneakily defaulted the CPUDIV to /4 meaning the internal clock of the PIC was running at a quarter of the expected frequency - thus the calculations were all wrong.

It took some time to figure this out, but setting

appears to fixed the problem. Also, because I am using a MAX232 linked to the output I have to invert the signals:

Not the answer you're looking for? Browse other questions tagged pic uart or ask your own question.

4
How set the baud rate for serial communication in ATmega32u4
4
PIC18 USART Interrupt for reception, doesn't trigger
1
Problem with USART programming
1
Reception without interrupt in USART of PIC18
0
Strange behavior of USART in PIC16LF18313
1
UART communication issue
2
Some characters are not transmitted correctly from mega32 to ESP8266
0
UART: Only receiving mess on RasberryPi when connected to a PIC18
1
Unkown issue while parsing a usart fifo buffer