Other answers here show a common way to allow a microcontroller to cause a contact closure (button press) within another device in an isolated fashion: use an optoisolator.

I have the reverse problem. I've got a distant unpowered button, and I want to know when it is pressed. I want to know this without risk of damaging my µC due to badness \$\gg V_{DD}\$ on the long wires running back to that button. If you want a mental model of the application, think of it as an electronic doorbell.

I already know how to sense the remote button press in an unprotected fashion: 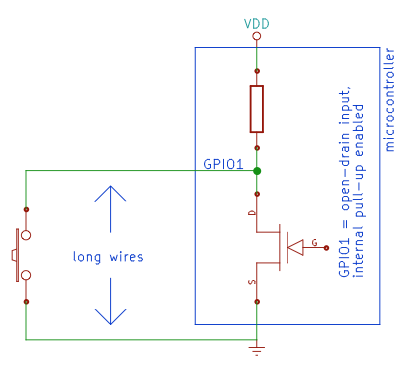 I also know about the standard method of microcontroller input protection. (Zeners, GDTs, TVSes, MOVs, current-limiting resistors...) I was just hoping to be able to buy a 2- or 3- terminal blob with some combination of those components arranged, qualified, and quantified. I even dared hope that I could find a gang of N of them in a "firewall IC" for under $10. (4 ≤ N ≤ 10) I want the effect of going to the littelfuse.com homepage and saying, "Yes, I'll take all of that, and can you tie it up and put a bow on it for me, please?" Littelfuse seems to prefer that I buy a pile of discrete parts instead.

An optoisolator won't work here because it requires that I either power the remote end with a separate isolated power supply or give up some isolation by powering the LED side of the isolator from the microcontroller's supply.

I want it to work with just a raw contact closure. If there's any voltage coming from the button, it's either an application error that I wish to protect against (e.g. active sender rather than a dumb button) or badness per above.

The Infineon ISO1I813T is the closest thing I've found so far: 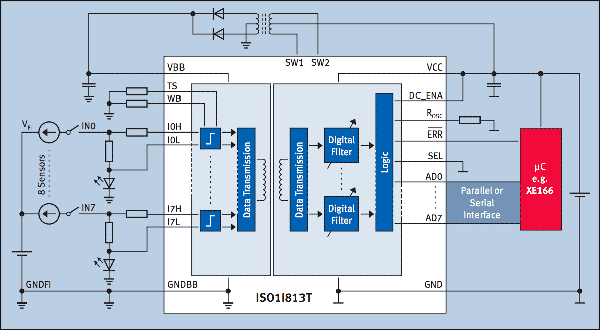 The problem is how many external components it requires. With the same number of components, I think I can probably come close to its effect with the standard method. The only thing I lose is isolation, and I'm not sure I really need that. All I'm certain I need is protection.

As a provisional goal, let's try to make it withstand at least an indirectly-coupled lightning strike. Somewhere between that and EMP-proof would be nice. :)

One class of devices that may be worth a look at are the integrated TVS devices used for USB protection. They include a TVS and current limit resistor but might be a bit light-on for lightning protection if that may be an issue. One example is the Semtech STF203 series available from Digikey at reasonable low-volume prices.

Maybe not low enough component count, but what about this? 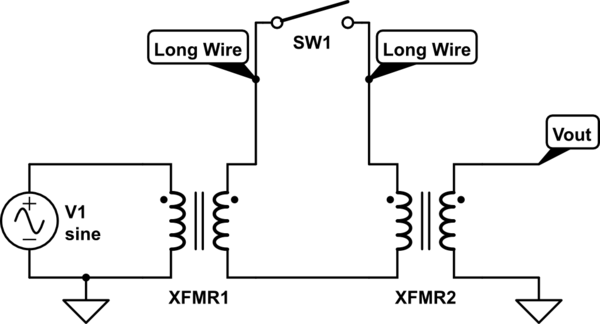 It's isolated, within the limits of the transformers, and requires no power at the switch. The only real complications are generating and sensing the sine wave.

Easiest thing to do is just give the button its own power supply, assuming the total time it spends pressed is minutes over the course of years. Coin cell + series resistor to drive an optoisolator.

Next easiest thing to do is a tiny AC-coupled system like markt's answer; could probably be done with one transformer and current sensing.

I'm going to add another silly thought I had last night that should meet your requirements for both isolation and protection, although I acknowledge that there are a few issues with it.

Replace your long wire with two optical fibres, one each for Tx and Rx. At the button end of the link, orient the two fibres such that Tx points into Rx over a small air gap (lenses are probably advisable). Replace the electrical components of the button with a blade that pushes into the air gab and obstructs the optical path when the button is pressed.

I have in my head a picture of the fibres entering a button block in parallel (rather than end to end), with the block containing both the button mechanicals and prisms and/or lenses for the optics. Unfortunately I have no mechanical/optical drawing tools to turn the mental image into a screen image.

An alternative: a single fibre, with the button blade replaced with a mirror. Push the button and the signal is reflected back down the fibre.

It may sound a little left field but it's about as electrically isolated as you can get and the button end at least is EMP-proof...

Not the answer you're looking for? Browse other questions tagged protection gpio isolation contact or ask your own question.

11
shorting a remote control pushbutton with GPIO and a transistor
0
Isolated closing contact other than relay?

29
Why are the high voltage overhead power lines with the same potential being isolated?
4
When is it appropriate to galvanically isolate components/subsytems?
1
Class II isolated power supply (wall wart) — referencing the output to mains neutral?
2
Efficient method for isolated detection of AC voltage without a stepdown transformer
0
Will the use of an AC relay keep my power supply isolated?
0
How to release wire from a Eaton Moeller M22-CK10 NO contact block?
1
How can I model/understand this isolation module's CMR rejection ability?
5
±12V protection for MIDI input
3
Raspberry Pi, too much load on GPIO
0
Isolated UART communication: Which side should send the supply for the isolator?