How does a capacitor smooth energy?

Capacitors don't store charge. That's such a worthless statement because it's based on this word "charge" that has multiple meanings. Please forget you ever heard it. They also do not smooth energy. What they smooth is voltage.

I will answer you question, but first you must really understand how capacitors work.

What capacitors store is energy. The stuff that flows around in electric circuits is electric charge. We measure rate of flow of charge in amperes. Quantity of charge is measured in coulombs. Because charge is never created nor destroyed, whenever we are measuring charge we are usually counting charge that flows past a metaphorical gate. Except for some very odd circuits, the total charge in an electronic device is also constant. It is very much like a closed hydraulic system: there's some fluid in it and you can move it around, but none ever enters or leaks out. You can count how much fluid flows past some point, but it must come from somewhere, and it must go somewhere else.

Imagine if you had a spherical vessel, filled with a fluid. Down the center of the vessel is a rubber plate that you can stretch by pushing fluid in one side and pumping it out the other. That's what a capacitor is like:

This is from Bill Beaty's excellent capacitor misconceptions.

When you push water in one side, an equal amount of water must come out the other side. Further, once this rubber membrane is stretched, it wants to return to being straight. Thus, the water pressure on one side will be higher than the other. If you were to remove the stoppers and replace them with a hose, water would flow until the rubber were not stretched.

Now replace "water" with "electric charge", and "pressure" with "voltage", and you have a capacitor.

Now imagine two vessels, one the size of a golf ball, and one the size of a swimming pool. Each has a membrane of identical stretchiness in the middle. If you pump a tablespoon of water through the golf ball sized vessel, the membrane will be stretched a lot, and consequently the pressure difference between the sides will be great. If you do the same to the swimming pool sized vessel, the membrane will barely move at all, and the pressure difference will just be slightly more than nothing.

Don't get hung up on "coulomb". A coulomb is how much charge moves past a point if 1 ampere is flowing for 1 second. Or, 2 amperes for half a second. Or, 1/2 ampere for 2 seconds.

If you took calculus, then you will recognize that charge is the integral of current. In other words, charge is to current as distance is to velocity. You can replace "ampere" with "coulomb per second" -- the units are exactly the same.

Using that knowledge and a bit of basic calculus, capacitance can also be defined in terms of voltage and current:

What this says is: the rate of change of voltage over time (volts per second) is equal to the current (amperes or coulombs per second) divided by the capacitance (farads).

If you have a 1 farad capacitor, and you are moving 1 ampere (1 coulomb per second) through it, then voltage across the capacitor will change at the rate of 1 volt per second.

If you double that capacitance, then the rate of change of voltage will be half.

And here, I think, is the answer to your question. Frequently capacitors are put across the power supply to hold the voltage steady. This works because the more capacitance you have, the harder it is to change the voltage, because it requires more current to do so.

In this application, capacitors don't smooth energy, they smooth voltage. They do so by providing a storage of energy from which the load can draw during times of transient high current. This makes the power supply's job easier because it doesn't have to deal with high changes in current. In effect, the capacitor helps to average the current demand of the load as seen by the power supply.

Smoothing capacitors are used to suppress voltage ripples, usually on power supply lines. They do this by periodically storing and replenishing energy. The image below shows a very common use case of these capacitors in a full bridge rectifier.

Capacitors are there to provide the illusion to your load that they are connected to an ideal voltage source.

For example, your power source has some internal resistance and there may be a significant inductance due to long leads. 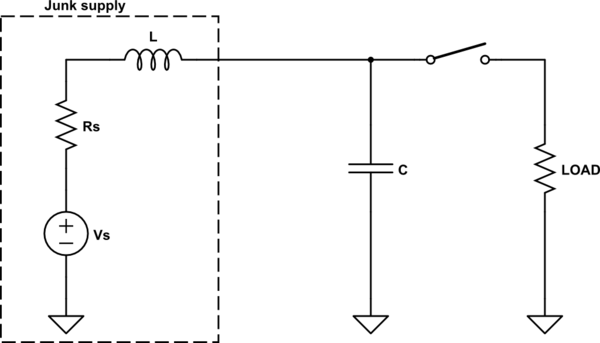 Yes, it works basically the same way. However, a capacitor typically has a lower capacity than, say, a battery. When you connect a load to a capacitor, its charge and voltage will decrease over time. That's why it's called smooth. A battery does that in the exact same way but much, much slower, because of the higher capacity.

Imagine a capacitor as a glass of water with a hole.So no matter how fast you fill the glass the output through the hole is roughly same. That's exactly how a capacitor works,it first charges up,then it provides an output which filters out the noise and provides a clean output,irrespective of how the input fluctuates.

1
How does a capacitor work as a filter in rectifier circuits (with equations)?