I am making a circuit to discharge an 18V Li-ion battery, with multiple cells, in order to condition it. Each 18V cell has a capacity of 100Wh when fully charged. I would like to control the condition of each cell individually with PWM (to control the current flow), in order to regulate the discharge based on battery and heat sink temperature. A common power resistor is diode or'ed between the 4 switches (Only 1 switch is on at a time).

My question is this, what type of FET or switch circuit (U1) could I control with a 3.3V MCU PWM and also ensure the lowest amount of leakage from the battery when not in discharge mode? Protection against over current, 0 leakage, and lowest footprint are a bonus. It needs to be able to handle currents of up to 1A. 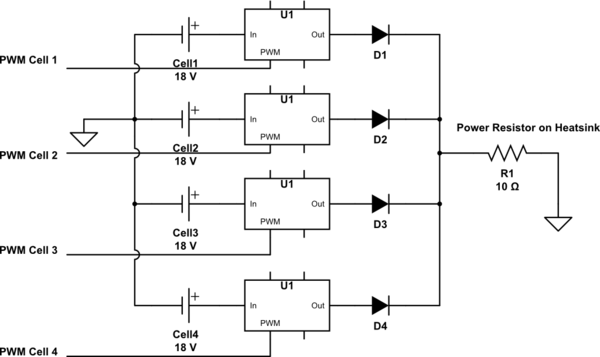 First, I hope you're aware that controlling discharge current via PWM is intrinsically more stressful on the battery than using a DC current level. The reason is that the battery chemistry is intrinsically non-linear, being less efficient as current increases. Even assuming no difficulties along that line, a battery pulling 2 amps with a 50% duty cycle will dissipate twice the internal power as one pulling 1 amp continuously, since doubling the current for half the time give 4 times the power for half the time, or twice the average power.

Second, I'd really recommend using about a 20 ohm resistor, rather than a 10 ohm unit. The reason is that if you somehow have a failure which turns a cell on continuously, the current will be about your desired maximum of 1 amp. This will, in effect, give you overcurrent protection naturally.

Third, the simplest high-side switch for your application would be a P-type MOSFET, and you cannot drive it directly. Try 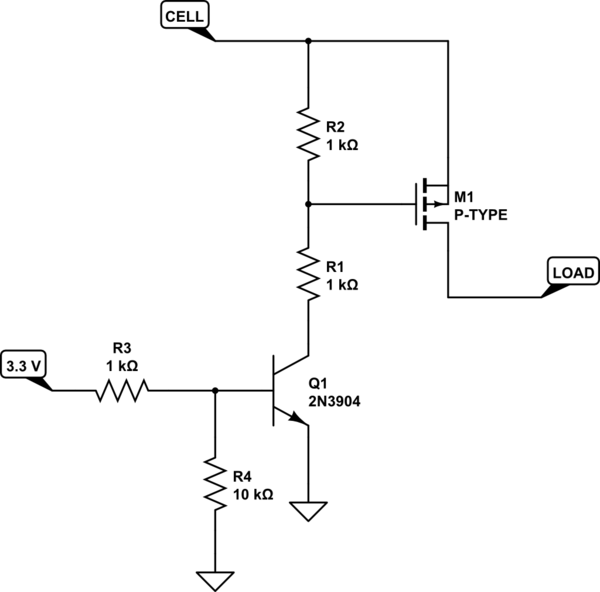 It also has the advantage that an open input will produce no load current.

Frankly, small footprint should not be a consideration, since you will need a fairly large heat sink to dissipate 20 watts.

Idss, the MOSFET leakage current in the off state, will depend on the MOSFET you choose, but it can easily be less than 10 uA for room temperature. I suspect that your cell voltage measurement will draw more than that. Note that a 1 Mohm meter will put 18 uA just reading the cell voltage.

Not the answer you're looking for? Browse other questions tagged batteries switches pwm discharge fet or ask your own question.

10
Properly charging and discharging Lithium cells during battery testing?
1
Minimal electronics to interface a solar cell to a battery powered system
2
balance charging current for batteries connected in series
2
How do I switch between primary battery and backup battery, if the primary battery drops below operating voltage or get disconnected?
3
Lithium ion battery impact of cycles on discharge rate
1
Lithium Battery Pack Discharger
0
Finding battery capacity
0
Can I put Li-ion batteries in series and discharge them at different voltages?
0
Determine a suitable replacement battery cell for an obsolete product?